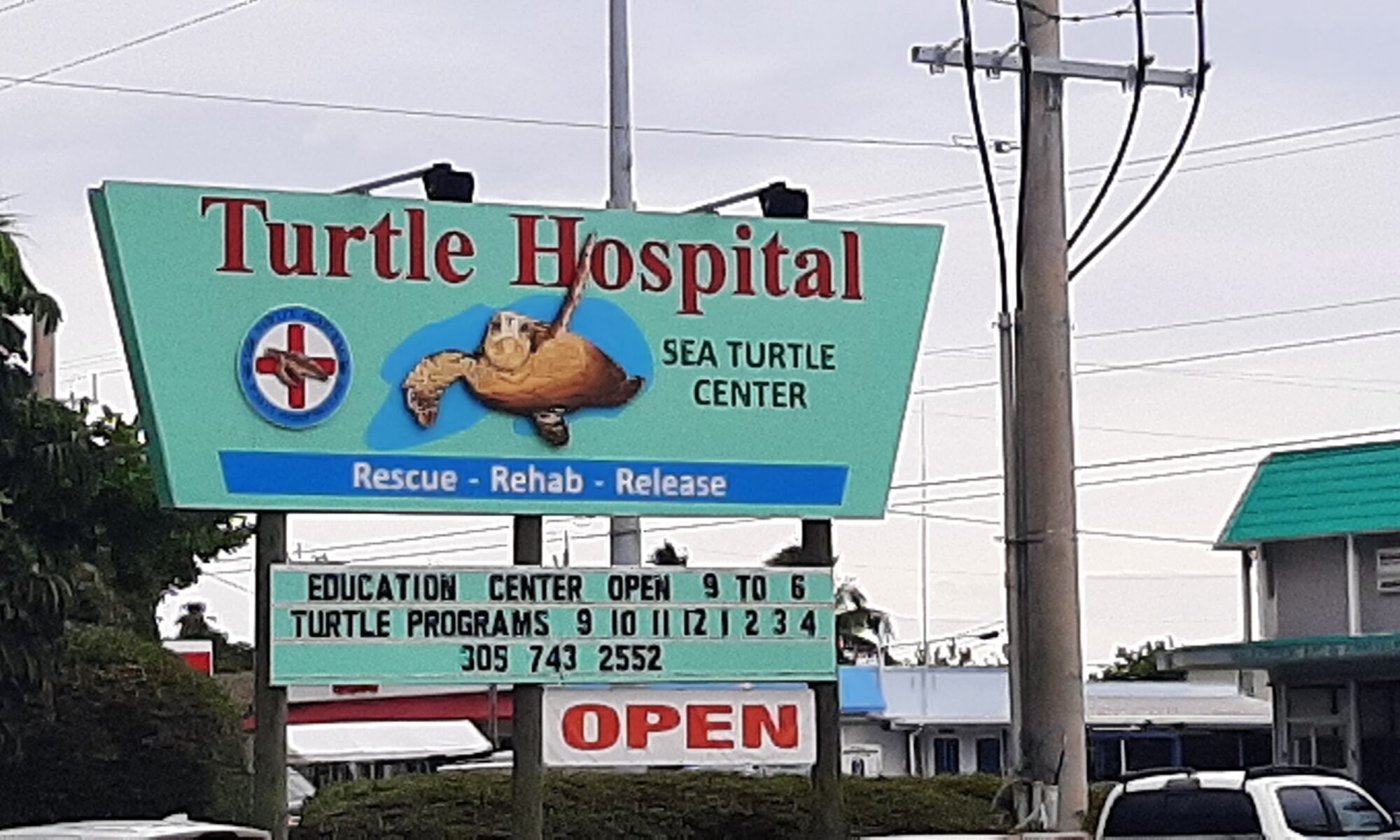 When visiting the Florida Keys, take 2 hours to visit the Turtle Hospital in Marathon. This nonprofit rescues injured and sick turtles in the area, rehabilitates them if possible, and releases them back into the wild. If they’re not able to be rehabilitated, they stay at the center.

In a recent visit, we got a tour of the hospital and tanks. We start off hearing about the different kinds of turtles, seeing their shells and learning about their sizes and habitats. We learned about how many turtles come in with garbage in their tummies because they can’t tell the difference between food like jellyfish, and trash, like plastic bags. They also eat bait off of hooks, and then get the hook stuck in their mouths or swallow it.

The guide showed us the emergency room and the surgical suite. Specialized veterinarians come to the hospital monthly to operate on the turtles that need it. They have specialized laser equipment to burn off external growths (fibropapillomas) that affect many of the turtle patients, on their eyes and bodies. They can also grow internally, and the vets don’t yet have a way to treat those growths. Turtles with internal fibropapillomas must be euthanized. The disease affects half of the Green sea turtle population in the Keys, and is also found in this population globally. The virus lives in all the Green sea turtles.

The turtles are treated for issues like entanglements from garbage (and fishing lines sometimes requring flipper amputation), shell damage from boat collisions, intestinal impactions from the garbage, and fibropapilloma growth.

The goal is to release the turtles back to the wild. They must have at least 3 working fins and be free of fibropapillomas to be released back. The hospital receives 70-200 injured sea turtles a year, and has released more than 2,000 turtles over the years.

Some of the residents (like the one above) have “bubble butt” where air is trapped between the shell and body. They are not able to dive down because they are too buoyant. They can get bubble butt from getting hit by a propeller. These turtles permanently live at the Turtle Hospital.

The hurricane tanks can hold most of the turtles if there’s a hurricane. The ones who have the papilloma virus or cannot be put into a tank with other turtles (if they don’t play nicely) are “dry docked” in a building. They are fine without water for the time being.

Some of the turtles, like the one above, have propeller injuries from boats. The hospital receives more than 100 injured or disoriented hatchling sea turtles each summer, and they are released back to the wild after receiving care.

The turtle hospital used to be a hotel for humans. But after a hurricane, the buildings were damaged and the owner turned it into a turtle hospital. Some of the workers now live in the hotel rooms, and are available 24/7 to rescue turtles when they get the call. The hospital has been around since 1986. If you see an injured turtle while you’re in the water or on shore, you should not attempt to move it or fix the problem, but rather call the hotline at 305-481-7669 or the Florida Fish & Wildlife Conservation Commission at 888-404-FWCC. They (or the Coast Guard) will come rescue the turtle.

This turtle has bubble butt. We got to feed some of the turtles during the tour with turtle chow they gave us.

The turtles without fibropapillomas live in the tank on top. Many of these turtles have bubble butt. They don’t mix the turtles with current disease with others, so they won’t spread it. They have a device that lowers into the water to lift the turtles up if they need to get transported for care. The tank also has fish in it, as the fish swim through the pipes going out to the ocean.

If you follow the turtle hospital on Facebook, you can see when they are releasing the recovered turtles back to the water. You can go and watch. They use the ambulance above to pick up injured turtles and transport them back.

If you go to the Turtle Hospital

How to use the Disney World DAS disability pass