Here’s a bit about what I learned while there:

Where do they make the floats?

This year the parade will feature five new floats, one more than they usually introduce in a year. The floats and balloons are all created from hand-drawn sketches at Macy’s Studio in Moonachie, New Jersey, in a building that looks like an office park structure. While there are three stories of offices and some storage/working rooms, the bulk of the building is an open warehouse, which contains a paint shop, wood shop and plenty of open space. The office/storage space includes a room just for costumes, and another room just for Styrofoam carving (more on that later). 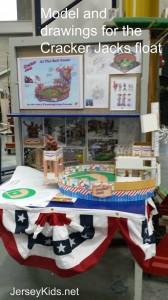 The planning involves hand-drawn sketches on paper with pencil, overlaid with vellum. Later they make a model, which you can see here for the Cracker Jacks float.

How are new floats sponsored and designed?

While Macy’s has floats they sponsor themselves (like the traditional turkey float, and this year’s Rocking Flamingo, a 14 foot flamingo with rider on top), corporations usually sponsor the other floats. Sometimes they approach Macy’s to inquire about sponsorship, and sometimes Macy’s approaches them if Macy’s thinks they’re a good fit. If the sponsor has ideas and a creative team of its own (think: Disney or Henson), it’s more of a collaboration where the sponsor comes in with ideas, and Macy’s works to make it come to life as a giant float. If the client doesn’t know what they want, Macy’s will get to know more about what the client is like, including the people who work there. That’s what they did for the Domino’s Sugar float (not new this year), coming up with a theme of holiday baking.

Before making their way to Manhattan for the parade, these huge moving structures (all with New Jersey license plates) are made “parade ready,” which means they’re disassembled and tied down so they’re no more than 8.5 feet wide and 12.5 feet tall. That’s a huge difference when you see it fully assembled, like the 40 foot tall Pirate’s Booty Treasure Hunt float.

The GoldieBlox float will take three trucks to move, since it’s made in three parts.

On the China float, if you look really closely (they blend right in) you can see the bolts that attach the stairs to the side, which have to come off to move it, plus some well disguised joints running lengthwise down the float. You won’t be able to see those from the street, nor from TV. You have to be standing very close – they’re well disguised.

The sides of the float are made of carved Styrofoam that’s then painted. They looked solid (though I wasn’t allowed to touch).

The floats caravan to Manhattan at an undisclosed date and time, using the help of local and state police departments as well as Port Authority. Roads are closed down. The floats are reassembled the night before the parade, on Central Park West, between 77 and 86th Streets. As soon as the float exits the parade route, the disassembly begins.

The returning floats are all stored in another facility, though sometime early in the next year, the floats are reassembled for “parade prep” in Moonachie (while the new floats are being planned), with any needed touch-ups made on the paint, structure and décor. They’re then considered “parade ready” and moved back to the other storage facility. Those floats get their generators and battery packs ready about a week before show time.

How much do floats cost?

That is the question. I asked it, and it’s one of the first questions people asked me when I told them I got to interview Macy’s Studio’s Creative Director, John Piper. He wouldn’t directly answer it, other than saying blah blah blah, the parade is a gift from Macy’s to the world, and there’s no price on gifts. I guess it wasn’t the first time they got that question. Of course my follow up question was going to be about how much sponsors pay to get into the parade, but there was no way I’d get an answer to that one either!

Who rides on the floats?

I was so surprised at the answer to this question that I asked it twice. Aside from the “talent” (i.e. singer/dancer/rock group), the costumed characters and one adult chaperone, the only people on the floats are kids ages 7-11. And these are kids of Macy’s employees. For returning floats, kids are partly chosen based on their size, since they already have costumes made and they don’t want to make more. You can also look for people wearing giant foam fingers in this float. It’s pretty funny.

How do they choose the talent for the float?

Each float has some sort of “talent” on it, which may be a singer, rock group, opera singer (this year Renee Fleming), or dancers. They match the float with the type of performance they want, sometimes reaching out to the talent, sometimes letting the talent suggest themselves (James Taylor once asked to do it – of course Macy’s said yes). The talent are paid a nominal amount, basically the minimum AFTRA rates, which according to this rate sheet (I don’t claim to have interpreted it properly) is probably no more than $2,000, way below their normal performance rates.

Meghan Trainor will be on the GoldieBlox float. Sabrina Carpenter from the Disney Channel’s Girl Meets World will be on the Treasure Hunt Pirate’s Booty float. Hilary Duff will be on the At the Ball Game Cracker Jack Popcorn float.

How many years does a float last?

“Three is the magic number,” said Mr. Piper. The first year it’s new. The second year, hopefully people remember it from the previous year. And the third year, they want a reaction like “I hope they have that float.” Some floats come out of retirement. Macy’s has their own floats, like the showboat float, or the train one built around 1985. The Macy’s turkey float was originally constructed in 1978 and is used yearly, usually as the first float. It’s been rehabbed since then but the construction is the same.

What are the new floats this year?

What happens to the floats when they’re done with the parade?

After the parade, they are broken down to transport, and brought back to New Jersey. Some of the smaller floats are brought to Universal Studios in Orlando, where there’s a mini version of the Macy’s parade daily (with floats and the smaller balloons) through January 1.

A version of this was originally posted on MommyNearest.com.