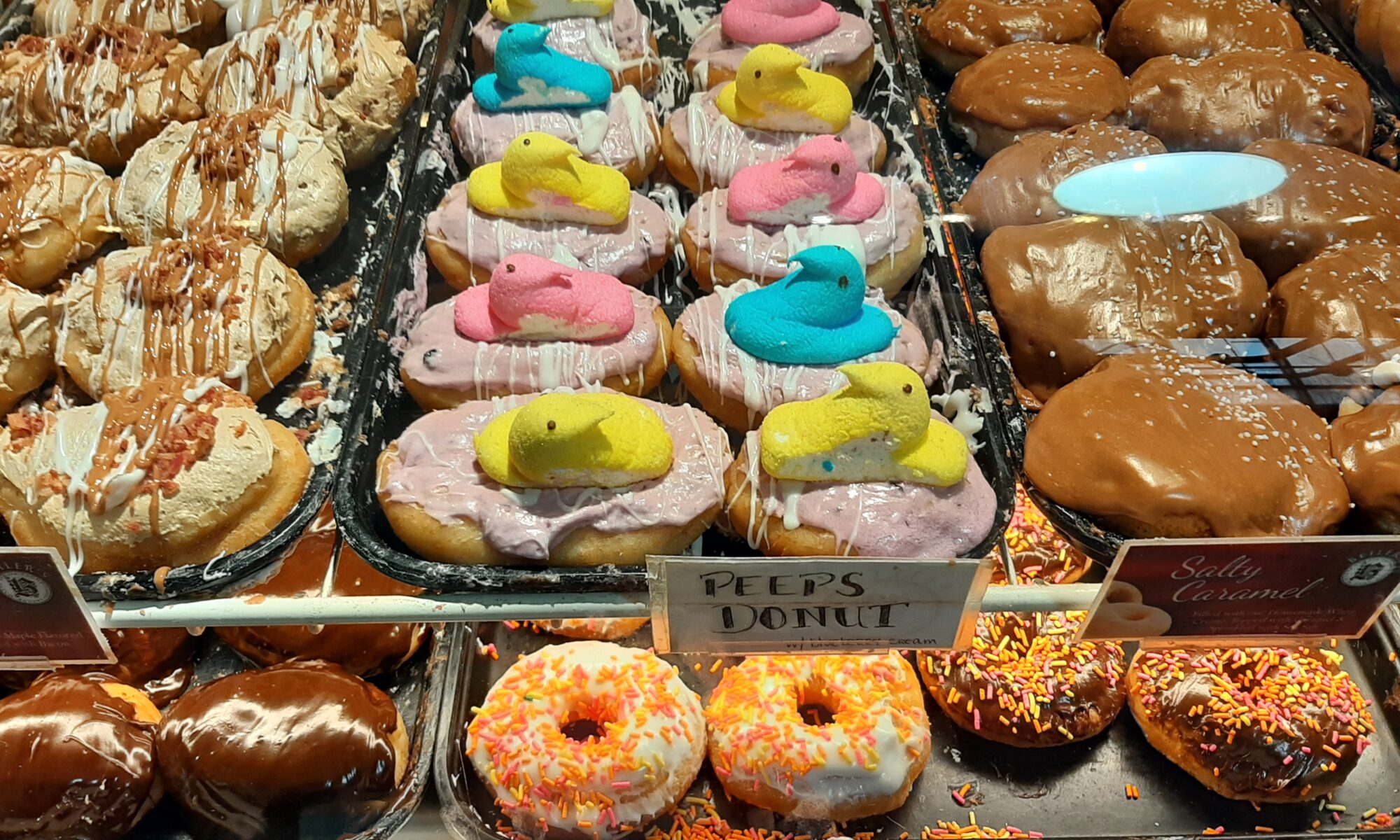 It’s nice to be able to travel again! We spent a weekend in Philadelphia. If you missed our series a while back about Philadelphia for families, check it out. There’s a lot you can cover in a day or two. Here are some ideas: Federal Donuts, the Constitution Museum, Reading Terminal Market, and the Museum of Illusions.

For weekend in Philadelphia breakfast, head to Federal Donuts. There are a bunch throughout the city.

Weekend in Philadelphia with Kids

Walk around – a LOT! You’ll see a lot of fun things if you keep your eyes moving. Philadelphia has a ton of murals. We didn’t take a Philadelphia murals tour on this trip, but we’ve taken one in the past. Even without a tour, you’ll spot a lot on your own.

This is close to Di Bruno Brothers at Rittenhouse Square (one of several locations), which has a fantastic assortment of meats, fish, cheese and a ton of gourmet goods. It doesn’t look big when you walk in from 18th street (you can also enter on (Chestnut), but it’s quite large and worth exploring.

We had an awesome couple of hours at the National Contstitution Center. It’s full of history and information, but they make it accessible with hands-on exhibits as well. History buffs can spend a lot of time reading all the plaques, but kids won’t get bored. Don’t miss the regular performances of Freedom Rising, where an actor talks about the country’s founding in a theatrical way.

On the top floor is a display of digitized photos of people who have influenced the Constitution over the years. It’s a great way to make history come alive, with people of all races, colors (and genders) impacting the country in ways you may not know about. You can click at your lesiure and read about who you want to read about.

The voting booths pit two presidents against each other. You will see their statments and decide which you believe in most (there are 10 sets). At the end it will tell you which president’s beliefs you align with most.

They have special exhibits at the National Constitution Center, like about women and voting, and the Civil War and reconstruction. The Center is on one side of the mall, opposite Independence Hall. If you want a tour of that, plan ahead as it gets busy. You can see the long line to get in to see the Liberty Bell in the building on the right side of the grass.

The Museum of Illusions

We’ve been to the Museum of Illusions in New York, and were interested in visiting here too, to see if it was different. A note that you need timed tickets (welcome to COVID), and I recommend you get them in advance, because they were not taking walk-ins, and were sold out on the weekend in Philadelphia when we visited. Thank you to the museum for accommodating Jersey Kids!

The Museum of Illusions in Philadelphia is a combination of photo op illusions like the ones pictured here, along with puzzles and wall-mounted visual illusions. It was very close to Independence Hall area. The museum was pretty small, so if you don’t like crowds, you’ve been warned, even with visitor numbers capped. They had plenty of friendly staff members available to take photos for you and to explain how some of the illusions worked. (One wall-mounted illusion was not so visible with the naked eye, but when looking through with your camera, you could see it).

We had a lot of fun with the puzzles, of which there were many. The one below starts off as a starting stack from biggest to smallest rings, alternating colors. The goal is to move the entire stack to the same position on another rung, but you’re only allowed to move them in alternate colors, and the smalls have to always be on top of the bigger rings. It is time consuming, but doable! Especially once you get into a rhythm. On the far back, there are cubes with 4 colors and different numbers. The goal is to get the front side adding up to 10, but there can only be one of each color on each side. I didn’t solve that one.

We almost finished it below but decided to move on. There are a lot of things not pictured from the museum in this post! It’s easy to spend an hour or more here, if you’re intersted especially in the puzzles, not just the photographable illusions. There are 60 or so illusions to see.

Below you’ll see a tunnel with colors and lights moving like a wave. I almost got ill the second I walked in – it was freaky. I had to grab onto the railing as it felt like the whole room was shaking. I tried walking through once more with my camera, and by focusing on my camera I was fine. I took a video, but it wasn’t so great.

In this age of COVID, the Reading Terminal Market (especially on the weekend) was very stressful. But we did go in to get some food – and especially to get more donuts. Of note, Beilers is closed on Sundays. We were there on a Saturday. I went to get food while my husband waited in the donut line.

You can watch them fry and glaze the donuts. In the picture above, the frying is in the back part of the photo, and the container closest to the woman on the left is filling the donuts. There are two probes and she puts the donuts on the probes, and it pumps them full of the cream.

Dilworth Park, outside City Hall in Philadelphia, had a fantastic display of magical animal topiaries. I’m not sure how long it will be there, but it’s worth checking out. It’s a city park, and free to visit.

Yard’s Brewery opened a new taproom on Spring Garden Street since we were there last. There is also outdoor seating, but it was chilly when we were there. The pretzel was delicious as were the beers and the other food. And yes, kids can go with you too to Yard’s, on your weekend in Philadelphia!