We love going to the shows at Discovery Times Square, and were excited about the world premier of Marvel’s Avengers S.T.A.T.I.O.N., because it involves superheroes and was high tech. 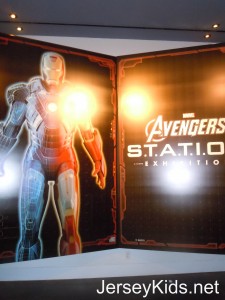 In case you’re wondering (because I was), S.T.A.T.I.O.N. stands for Scientific Training and Tactical Intelligence Operative Network. I won’t be typing it out that way in the future. Too much!

The first thing you’ll do when you get there (aside from getting your tickets and checking your bags) is to go to a computer kiosk and print out an identification card. Don’t think too hard about this, because I’m not sure they actually use any of the information, other than pulling up your name once or twice in the exhibit (more later). My husband chose the name Thunderbutt Jones, just because. Also, while I put in my email address, I didn’t get any emails within one week – so not sure what that’s about. It’s good I’m not getting spam, but I thought I’d get some kind of results emailed to me. 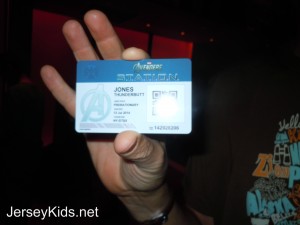 In any case, they’ll check to make sure you have your ID card no fewer than 5 times as you walk into the exhibit and various rooms. You do need the QR code for some of the exhibits, so don’t lose it. Also, put your camera away – they were very diligent about the no photo rule (but I had my handy press pass, so I could take all the pictures I wanted – woo hoo!). They take your group photo in the beginning and try to sell it to you at the end. 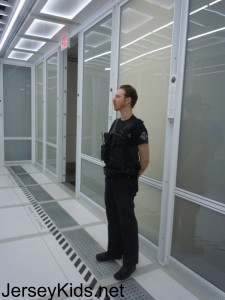 You’ll enter the briefing room, where your special agent will give you the run down and give you a fake biometrics scan. You’ll learn that the earth is under attack and the Avengers came together assembled in a group to become a network of recruits. This is a S.H.I.E.L.D. training facility, As a potential new recruit, you’ll go through a series of tests (using your card as ID) to see if you’re able to become a certified recruit or just to put you through training. Everything you do (using your ID card) will be tracked and progression updated, though you won’t see those results unless you pay for it.

As soon as they said “keep your card safe,” my daughter dropped it. Fortunately it didn’t go far. 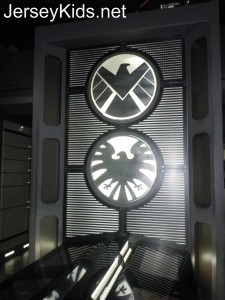 The next room was another briefing room with computer monitors that showed us videos and descriptions of the various superheroes, and then there was a room (below) with several superhero costumes. My husband said “wow – look there’s a real suit!” 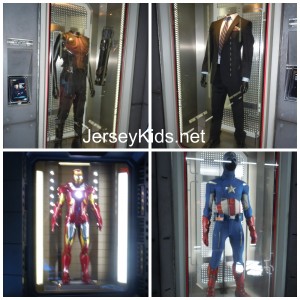 The Captain America room was first, and we were told this was the actual cryogenic birth pod, I guess used in the movie to turn Captain Rogers into Captain America.  They have an electronic screen you can press, showing you how he was able to survive cryopreservation.  It was discussions like this that drove my scientist husband nuts, because parts of the exhibition showed true scientific principles, and some showed made-up scientific principles, and it wasn’t clear which were which. 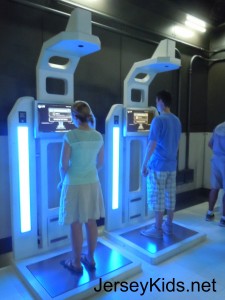 In any case, in the Captain America room you could take a number of physical tests showing the difference between what Captain America could do and what you could do. One involved sitting down and doing arm rotations on a device. Of course we had a family contest to see who was fastest (I beat the kids), but it also showed how many more Captain America could do. The photo above showed your height and weight (for those who were brave) and kept that in your card profile. The one on the left was a few pounds under my normal weight, and the one on the right was accurate, however it also told me I was 6’2″, which is way off.

They had some other systems where you could test your impulse decision making and reaction time by touching good guys and bad guys on a video screen. I thought I did really well, but my score was zero, so I’m not convinced it worked that well. My kids had the same problem.

The next room was about the Hulk, and you could learn about DNA strand changes, something my husband studied in graduate school. You got a sample DNA sheet you could make changes to with gamma rays, and then see the difference. That had some bearing in reality. The other fun thing to do in the room was to stand in front of a depiction of the Hulk on the wall and jump. The harder you jumped, the higher/louder the Hulk jumped back. Not sure what the point of that was (we didn’t see an explanation) but the kids had fun watching their 6’3″ dad jump and make the Hulk move. After looking at one other exhibit in there, the security guy made some fake noise about us doing something illegal and told us we had to go in the next room to escape. Okay. Moving on.

We’ll skip the Thor room which had some NASA astronomy photos that were real, and not well explained. The gist, I guess, is that Thor comes from another planet. It was at this point that I said to my kids “I guess you really have to have seen Avengers to get this exhibit,” at which point they reminded me that they had all seen it without me. 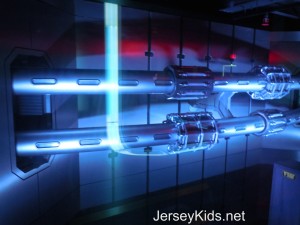 The last room was for Iron Man, and my favorite room of all. They had awesome floor lighting, including this Instagram photo I posted. Other lighting wove through the room and my eyes kept coming back to it. The first thing you can learn about is the particle accelerator above, which is a true scientific device used. This one made all kinds of cool noises and light changes – I doubt the real ones do. If you talk too much while waiting for your turn, the person in front of you might rudely tell you she can’t concentrate on her reading, and that she has no interest in what you’re talking about.

After learning about the particle accelerator, you choose some particle types to mix together, and you end up with a new element, based on your name (your ID card comes in handy!). We got Kaplanium almost every time, in spite of choosing different elements each time. Except when my husband’s Thunderbutt Jones card was used, and to our disappointment he got “Jonesium” instead of “Thunderbuttium.” You can see we still have probationary agent status. 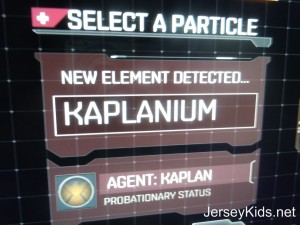 Another potentially exciting thing to try in the room was an eye movement detector machine where you blow things up on a video screen based on your eye movements. Of the three machines, only one was working, and there was a long line. But we waited and my son and I tried it independently. It didn’t work well. I couldn’t get the target to match up to my eyes after it was set, so I couldn’t blow anything up, and my son had the same problem. And because the eye didn’t match up to the target, I also had a very hard time switching out of that game into another mode/menu. 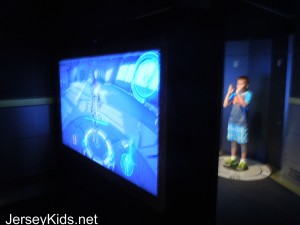 We did have fun with this exhibit in the picture above though. We actually saw this at Disneyland in April – see #12 in this post. Only the line at Disneyland was 30 minutes, and here it was 5. You stand in front of the screen (there are 2 screens, back-to-back) and you get outfitted with virtual armor which you see on the screen. You can then move your body and it moves on screen like you’re Iron Man, following your movements. You also get the ability to fly. It was fun.

Best parts of the exhibit: The exhibition/set design was awesome. It felt like we were walking through a Star Trek or Star Wars set, with the paneled hallways and spaceship-type doorways. The security staff there was also dressed up to look like agents, and most of them acted the part, which made it more fun.

Worst parts: Some descriptions felt like they were trying to teach you about science and make it educational, but we weren’t sure what was real science and what was Marvel Comics science. And not all the exhibits worked properly. At the end, I expected to get a print-out (or at least an email – otherwise why was it provided?) with my stats on each station. And to be told that I was now an official agent and completed training. Instead, at the end, you leave the Iron Man exhibit and drop straight into the photo upsell area, also offering a print-out you should have gotten for free. 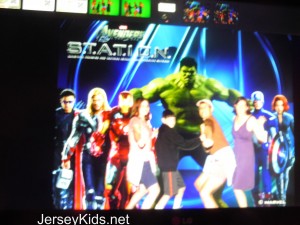 In case you’re wondering what the photo looks like, here’s a blurry copy of it above. You pose like a superhero and then you’re surrounded by superheroes. If you don’t want a $10 copy, you can get one emailed to you for a few bucks. Of course they have many packages including a 3-D copy, and a folder full of stuff including your printout and maybe even a photo ID.

While you’re at Discovery Times Square, they also have two other exhibitions that are family-friendly. The LEGO The Art of the Brick one is great for all ages. The Body Worlds Pulse exhibition is fascinating, but probably not so good for young ones. Click on those links for the Jersey Kids reviews and photos.

Time: tickets are “pulsed” which I was told means that you’ll wait no more than 8 minutes to go inside. We spent about an hour in the exhibition, with a small crowd.

With kids: As with all exhibitions at Discovery Times Square, you should use the bathroom before you go in, because once you exit, you’re done. They have a free coat/bag/stroller check room. No tips allowed. Downstairs when you exit you’ll find gift shops for all exhibitions, plus a cupcake store. No photos are allowed in the exhibition.

Thank you to the Avengers exhibition, which provided us with tickets to facilitate the review. As always, all writing an opinions are my own.

One Reply to “Review: Avengers at Discovery Times Square with Kids”