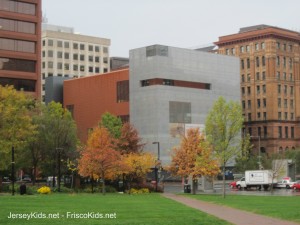 We’ve been wanting to check out the National Museum of American Jewish History (which I still can’t say without having to look it up for accuracy) since it opened in its current form in 2010. Previously it shared space with Congregation Mikveh Israel (see the bottom for more on that), since its founding in 1976. This museum is on Independence Mall, just down the street from Mikveh Israel, and across from the Independence Mall Visitor’s Center. 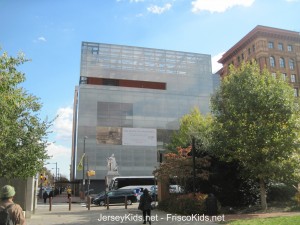 It’s a striking building inside and out. We’re not allowed to take pictures of the exhibits, so you’ll be stuck with my pictures of only the building. The exhibits are generally organized by date, starting at the top (4th floor) with the foundations of freedom from 1654-1880. You can see from the museum’s name that it focuses on the life of American Jews, so it’s really a focused look at how our lives here have changed over the years, based on different influences. You can get a good overview of the main exhibit structure here.

The first Jews came to the states in 1654 – they arrived from Recife, Brazil. That was a Dutch colony that was tolerant of the Jews. Many Portuguese moved there. The initial group of Jews in the United States included 23 females, males and children. They were met by Peter Stuyvesant,  the governor of New York at the time. He didn’t want the Jews admitted, and he wrote to the Dutch West Indies Company to get permission to throw them out. Fortunately the Jews had friends in the Dutch West Indies Company, and Stuyvesant was told he had to let them stay, but they needed to support themselves. The first Jewish families in the U.S. had Spanish sounding names and were conversos. They came back to their Jewish roots. Emma Lazarus, who wrote the poem at the base of the Statue of Liberty, descended from them. She did not live to see her poem on the statue.

Inside the museum you’ll find the famous letter President Washington wrote to the Touro synagogue, the oldest synagogue building still standing in the U.S. It was built in 1763. The original letter is not always on display. Apparently if there’s a guard there, it’s the original. 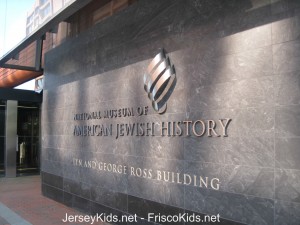 We took a tour with the kids, which lasted an hour. They were the youngest on the tour by far. While they were generally bored during the tour (adults thought it was interesting), they did learn some things of interest:

We learned about the Maryland “Jew Bill” which is what it was actually called. It passed in 1826 and was a religious test that people had to take in order to take an oath of office.

My kids were glad to learn the name Rebecca Gratz, a never-married woman who started the Sunday School Society, i.e. religious school. “Now I know who to hate,” my son said. She is thought to be the inspiration behind the Rebecca of York character in Sir Walter Scott’s Ivanhoe.

We learned that the first Jewish chaplain was during the Civil War, and that President Lincoln was supportive of the Jews in the military.

We learned that rabbis came from Europe to have pulpits here, but there was initially no place to ordain new rabbis. Stephen S. Wise formed the reform Hebrew Union College to ordain rabbis and the first ordination banquet became known as the trefa banquet, since shellfish was served. Some walked out, include Henrietta Szold (Hadassah founder) and her dad. Several years later, Jewish Theological Seminary opened, as a conservative movement (we did know that the reform movement came first). 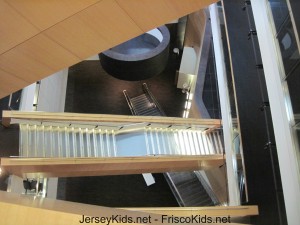 On the third floor we learned about the National Council of Jewish Women, whose members met immigration boats to get the single women off so they wouldn’t get trapped in the white slave trade.

The museum had a model of the old Brooklyn Jewish Community Synagogue, which had a ballroom, pool and prayer space. It was affectionately called the Shul with the Pool, to appeal to all.

By this time, my kids had checked out and were completely bored. There is an area where you can record yourself on video answering a question like what foods you like to eat on Shabbat, or singing Take me out to the Ball Game. They had fun doing that. There were a few other hands-on things, like putting a mask on for the Purim ball, and playing with some of the exhibits in the more modern section. But generally it’s probably not the most exciting museum for kids. They do have some films there, but we didn’t have the chance to see them.

While they occupied themselves with video, I ran through the second floor, which talked about more modern cultural life in the U.S. The museum had a section on summer camps and their place in American Jewish life. You can use their computer to look up your camp (no, it wasn’t a complete list and was very East Coast centric – my Arizona summer camp was not included) and see pictures on there. I saw some pictures from my kids’ camp.

The bottom floor looks at some prominent Jewish Americans, though we didn’t spend much time there, heading to the gift shop before leaving. If you’re looking for any Judaica, I recommend going there. They had a really nice selection, and we ended up buying my daughter a tallis for her upcoming Bat Mitzvah there. My son liked the LEGO mezzuzot (above).

A few days earlier, we happened up Congregation Mikveh Israel, founded in the 1740s. It’s on the way to the Christ Church Burial Ground where Ben Franklin is buried, and then to the Philadelphia Mint (our destination). This is the only surviving Sephardic synagogue in Philadelphia is almost next door to the museum.

One of the members there gave us a tour. The building itself is not original, and I believe it’s in its third or fourth reincarnation. Benjamin Franklin, who was not Jewish, nor religious, contributed to the building fund. He also helped raise money for Christ Church. And when the temple burned down once, Christ Church even contributed money to help rebuild it.

One of Mikveh Israel’s famous members was Haym Solomon, who raised a lot of money for the revolutionary army, from his own bank account and from Jews at this temple. The museum has his ketubah (marriage contract) on display at the National Museum of Jewish American History (I had to look it up again). Rebecca Gratz (i.e. Sunday School lady) was also a member.

It was an interesting history (unfortunately I wasn’t taking notes – we had to leave our bags in the coat room), though again, the kids were bored. It’s an orthodox Sephardic congregation, so women sit separately from men, though there is no balcony – they sit in the back row, basically. If you’re in town for Shabbat, they welcome you to come, and have Shabbat dinner and lunch there.

Disclosure: We received media tickets for the museum. All opinions are my own.