You can’t go to Philadelphia as a newbie and not see the Liberty Bell and Independence Hall. So of course this was on our list to do. Here’s something else you should know. Tickets are free, but if you don’t reserve Independence Hall tour tickets in advance (or go wait in line, going early), you may not get in. So if you’re on a tight schedule, I recommend you call ahead or reserve online for a $1.50/person fee. Especially in high season. By afternoon, tickets may be gone. Tickets are required March through December.

We didn’t actually go into the building with the Liberty Bell (there was a line and we didn’t feel like waiting), but if you do, they have some exhibits inside and of course you can get a picture of you and the bell without glass obstructing the view. But if you don’t, you can still see the bell decently up close, and get a picture with you in it. The key is to walk to the right side in that picture, the same side as the line is, and there’s a spot where you can take a picture. The picture on top was taken from outside. We have the requisite photo with us and the bell too! 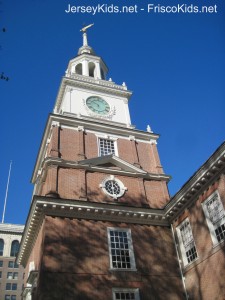 You need to sign up for a tour to go into Independence Hall. As you can see from the photo below, there are a lot of people on a tour – around 80. We’re at the front of the line. You get a timed ticket, and have to show up about 15 minutes early to go through the scanner and bag check, and then wait in line to go inside to the adjoining building for the start of the ranger talk. If your stroller is big, you’ll want to leave it outside. The first room is very tight with chairs. At Independence Hall, you go upstairs at the end. Not stroller friendly (though the downstairs is wide open).

Our tour guide was excellent, and it turns out he’s a volunteer. He talked about the concept of liberty, a word that’s been in use since about 2,500 BCE. Independence Hall was originally known as Pennsylvania State Hall, where it served a state purpose. It’s best known for the results of the Constitutional Convention, which George Washington ran. I highly recommend seeing one or two of the free films at Independence Visitors Center before coming here, because it gives a little more background of the life and times. Both the Declaration of Independence and the Constitution were signed here.

The outside of the building is almost original. The steeple was replaced in 1828. Inside, 70% is original woodwork and the colors were restored accurately. The furniture is not the same, but contains original antiques of the same period.

We saw the court room first, which had a jury for an openly public trial. There’s a prisoner box.  As part of the English system, those in the U.S. were going to lose the right to a jury trial – their protests lead to punishment. This was one additional reason why they wanted to separate from England (plus taxation without representation…and other reasons).

Across the hall is the assembly room that is so familiar from art work. You can see that room in the photo below.

We learned some interesting facts, like Benjamin Franklin was 81 at the time of the Philadelphia Convention, and was carried in by slaves (slaves!) every day for 100 days so he could hear the debates about the constitution. Others say he was carried in by four prisoners from the Walnut Street Jail.  In any case, you can see the original chair/hand-carried carriage they used to bring him here, at the Ben Franklin Museum (we saw it about 10 minutes before going to Independence Hall). He was the oldest person to sign the Constitution.

We learned how the delegates risked their lives signing the Declaration of Independence, because it was considered treason by England. It was not thought to be perfect at the time, as it didn’t address the status of females and slaves.  But it was a compromise to get it passed. And Ben Franklin urged everyone to sign it, in spite of its flaws. Some fun facts about the Constitution. 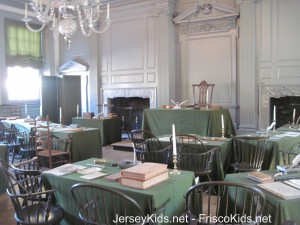 Each colony got one table and three representatives for the . They were arranged north to south. Thomas Jefferson sat at the Virginia table (which is on the right side of the picture, in the back). There’s an Aitkin bible on the main table in front. It’s the same type that was there originally. The only furniture originally in that room was the chair that George Washington sat on, the chair of the rising sun (you’ll hear a good story about that chair in the visitor center movie, and again during the tour). 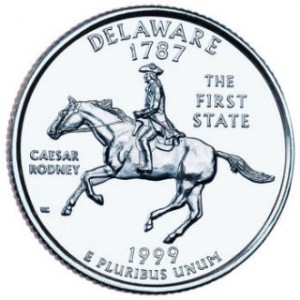 The statesmen voted on the Declaration of Independence on July 1st. There were nine ‘yes’  votes, three ‘no’ votes and one abstention. They had one night to turn four delegates (Pennsylvania, South Carolina, Delaware were the no’s, and New York abstained) into ‘yes’ votes. For Delaware, the two delegates were tied, and they needed a third to break the tie. That man, Caesar Rodney, had gone back to Delaware, an 80 mile horseback ride away – which was an overnight trip. It was storming that night and Rodney was almost 50 years old, suffering from facial cancer and asthma. He rode all night in the rain on his horse, arriving just in the nick of time at 9 a.m., breaking the tie by the Delaware delegates and allowing the Constitution to pass. That’s who is pictured on the Delaware quarter. There are 750 million of these quarters in circulation, and our guide urged us to send him a postcard when we found one. That sounds like a lot of quarters, but it’s half as many as were issued for some other states. We finally found a Delaware quarter a few months later!

The Declaration was signed on July 2nd. So why don’t we celebrate on that day, why isn’t that our country’s official birth, as John Adams though it should be?

Jefferson is the one who wrote the draft during the summer (see the photo below – that’s where it was drafted). They had to approve changes and adopt the document, and did so on July 4th. They had the actual signing ceremony – the fancy one depicted in historical documents, on August 2nd. They started off with 55 delegates when initially debating the declaration, but in the end, there were only 39 left to sign it (ironically Jefferson was in France and didn’t sign it). The same inkwell used is still there.

The Declaration changed the loose association of states formed in the Articles of Confederation. It strengthened a weak congress, which couldn’t tax the citizens. The citizens were worried about taxation, given what happened in England. However without taxation, they couldn’t pay soldiers and the war bills.

Upstairs, you’ll see the hall where they held receptions as well as fugitive slave trials. Prisoners of war came here, and British used it in 1777 when occupying Philadelphia.

App: the National Park Service just released an app for Independence National Historical Park, which includes the Liberty Bell and Independence Hall. You can get it for free here on iTunes or Google Play. They included guided audio tours, points of interest and other features. They’ll soon be adding a kids’ portion with the park service’s first electronic Junior Ranger activity.