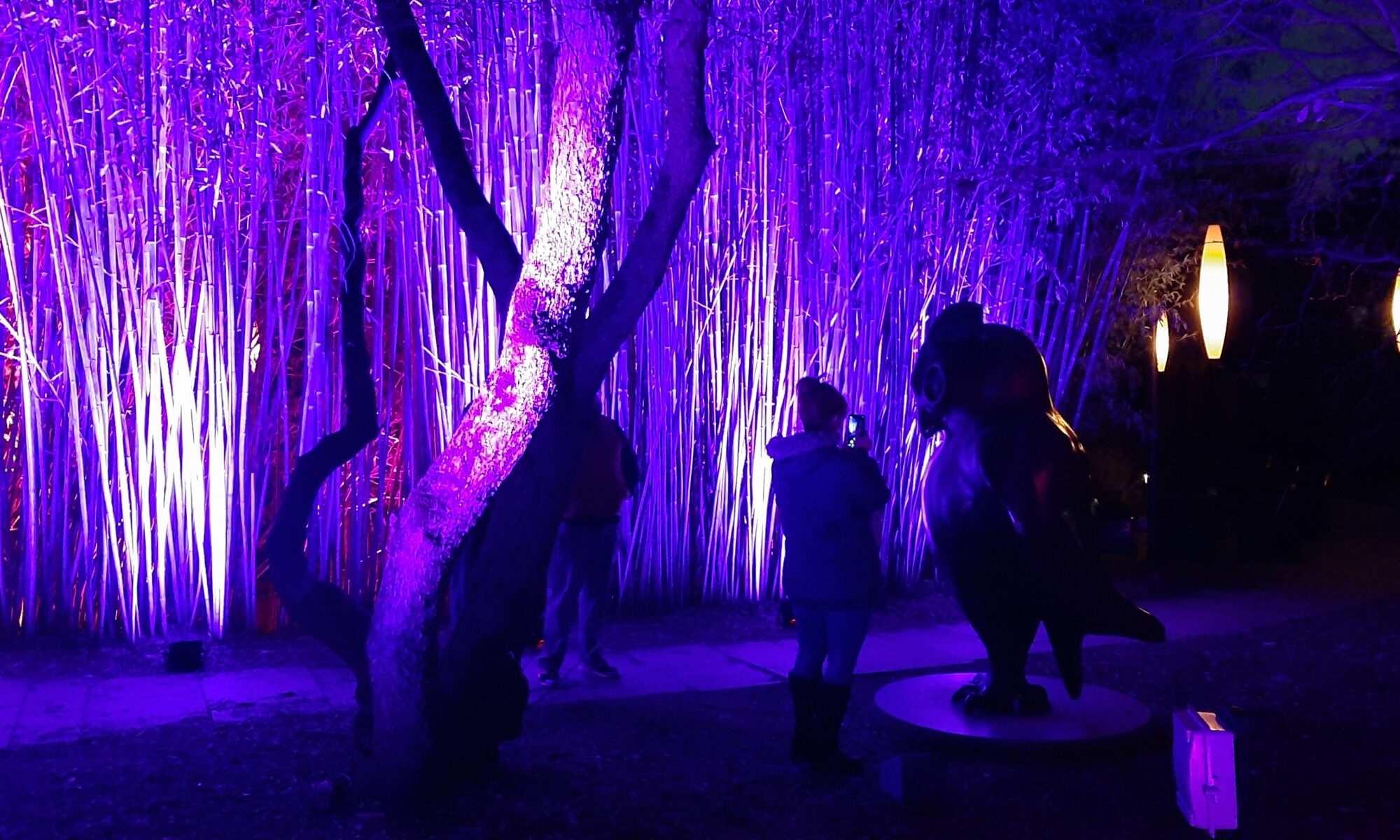 We’ve been to the Grounds for Sculpture a few times during the day and loved it. It’s a huge place with a lot to see, and many fun and playful sculptures the kids will enjoy. The picture below was the first stop, and the projections on the sculpture kept changing, as did the lights on the trees behind on the right – which I think is the last of the exhibits – it’s a row of trees you walk through that’s pretty in the daytime too.

We headed back recently for the Night Forms: Infinite Wave, an exhibit at the Grounds for Sculpture at night with kids. We really enjoyed it. We missed the first version of it 2022 and were glad to see it return – in a new form, for those who saw it last year.

For Night Forms: Infinite Wave, the Grounds for Sculpture partnered with the Klip Collective to design light, sound and video projection mapping, many of which were on sculptures already on display. The sculpture below was one of my favorites. It’s in water, surrounded by trees. The lighting display on the sculpture changed, as did the projections on the trees. This was stop #3, and it had an interactive element. We were told to use the joystick and A/B buttons in a certain order – our kid told us this was the Konami Code. Good thing she knew what it was because we didn’t. When you entered everything in the right order, it caused the projections and sound to change. I won’t spoil it but if you want to hear it you click on this video (the visuals aren’t good but the sound is good).

There are 13 exhibits on the marked pathway. You can also download the QR code to follow along on the website to learn more about each station. We were happy to just experience it. Two of the exhibits are interactive, which an employee mentioned before we started. Those are #3 and #10.

I had a hard time choosing a photo to use above, as it kept changing and had interesting colors and patterns. You can walk on this flooring, around the sculptures. It is surrounded by water, which is a bit tricky to see at night, but there’s a walkway to get over there (or you can hop over as many were doing).

The sculpture above was our favorite. There’s a projection loop that ran maybe a few minutes and really worked well with the sculpture. You can watch a video of it here. On the right is a hedge with more lighting rods – not very exciting, but you do walk through it.

Guests park in the lot just to the left of the entrance, by the Seward Johnson Center for the Arts building. You can go in the building to get hot drinks, use the restrooms, visit the indoor exhibits and the gift shop. Or you can just head straight out to Night Forms.

I think Night Forms: Infinite Waves would be fun for kids, as the lights are always changing and there’s a new discovery at every turn. You can still see some of the sculptures that aren’t officially included in the exhibit, as you wander around. Just keep an eye on the little ones, as there is a lake and there’s not a lot of light around it.

The exhibit above was #10 – and one of the interactive ones. There were 2 stations where you could play something like a xylophone and it would make music. Also to get out you walked through the middle, which was kind of fun.

Night forms: Infinite Wave is on view through April 2, 2023. You can get timed tickets Thursday through Sunday from sunset to 11 pm. Tickets are $28 for adults, $22 for students 6-17 and free for kids 5 and under. There are some member prices as well.

Take some time when you’re there to go through the indoor exhibits as well. The exhibit is stroller and wheelchair accessible, but it is not paved. It is a dirt path.

The Grounds for Sculpture is in Hamilton, NJ.