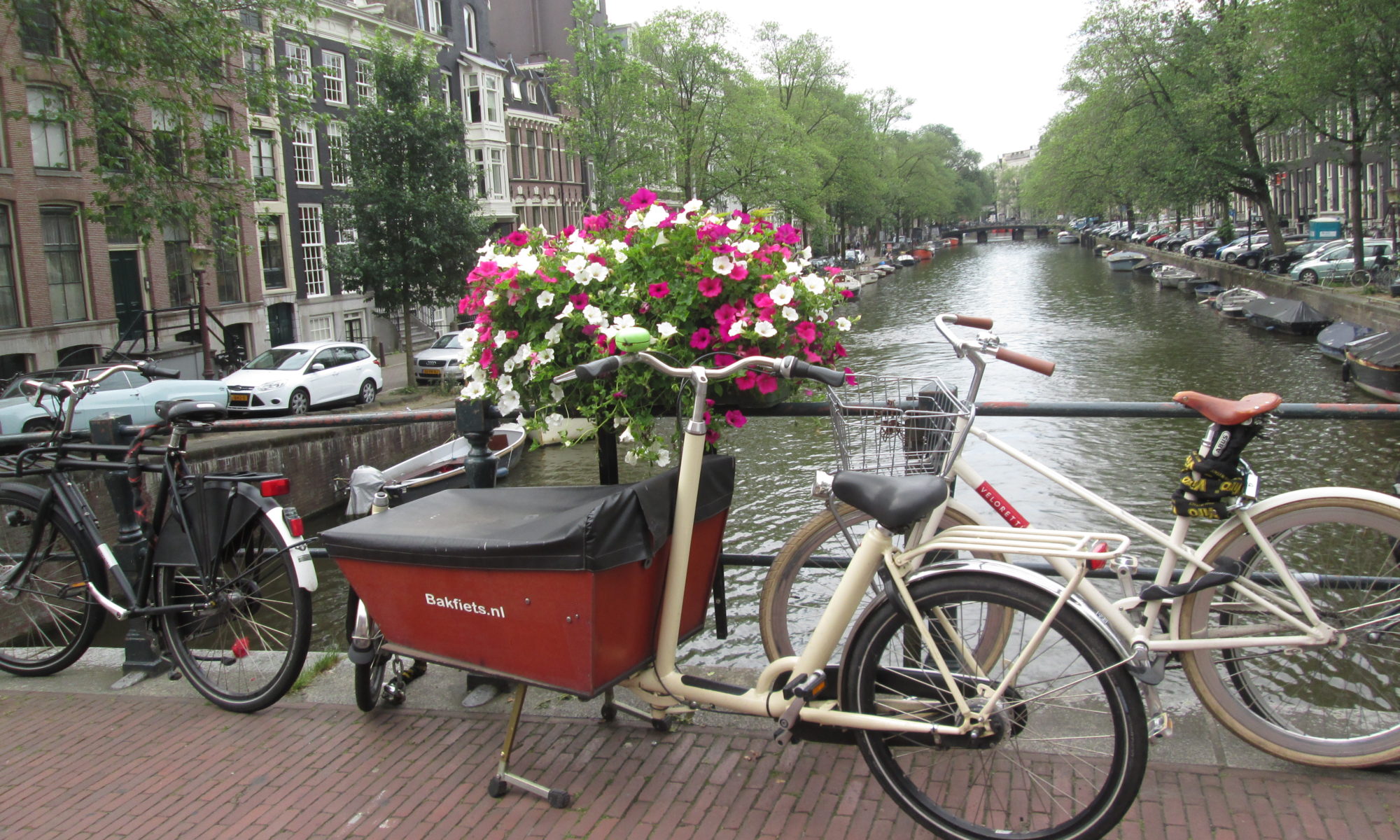 We recently transferred through Amsterdam on our way from Tanzania. It would be a shame to miss spending time in this wonderful city, so we planned 2+ days in Amsterdam. With so little time, we really had to maximize our hours. (Read 12 random observations about Amsterdam after this).

So here are our recommendations for what to do in Amsterdam with 2 (or 2.5) days, in no particular order.

The city is so fun to walk around, with canals, decorative old buildings, fun shops and lots to look at. We used a walking walking guide from our Rick Steve’s guidebook, which brought us around the central canal areas and even to a free viewpoint at Blue Amsterdam, a cafe that allows you to walk around its 3-4 story views without having to order anything.

We also followed the Steves walk through the Red Light district, something not all families will want to do. But we had teens and we felt this was Amsterdam, so they should see it. Granted, we went in the afternoon, before it got completely seedy. We saw a lot of tourists (I don’t think it’s a popular spot for locals), smelled a lot of weed and only saw a few women in windows (but lots of shops with window displays that you may not want to explain to young kids). Amazingly, my son didn’t even spot the window ladies, though my husband certainly did.

There are a lot of canal tour companies in Amsterdam. We went on the Lovers canal cruise.  We thought it was hilarious to take one called Lovers when we went with the kids, but it turns out Lovers is a family name. The cruise company gave us review tickets for a one hour cruise. We weren’t able to compare this cruise against the others (which were similarly priced for a one hour tour), but we definitely enjoyed the cruise and learned a lot from it. The cruise took us first to the north side of Amsterdam, one we wouldn’t have had time to see on our own.  Then we headed into the scenic canals. I couldn’t follow exactly where we went, but the guide and audio tour sometimes told us the canal names.

Canal tours leave every 20 minutes in summer (check hours before you go – they have day and evening hours) and you don’t need reservations. Just go to the dock and get in line. We were there in high season (July) and waited about 20 minutes for a boat in the morning. Each boat holds 80 people. The captain gives some information, but they also give you ear buds and you choose which language you want to listen to the tour in. We learned a lot about the city and the canals, and when we were walking and biking around later, we definitely felt more informed. It’s a good introduction to the city.

Bikes are EVERYWHERE in Amsterdam. You seriously have to look out for the bikers as they will run you over. They have the right of way. We originally planned to take a bike tour in central Amsterdam. But having walked around for our first day in Amsterdam, the idea of spending a few hours biking around Amsterdam didn’t seem as interesting. We had seen a lot of the city by foot, and we saw how crazy it was to bike there.

We researched tour companies at home, and decided to book a last minute countryside tour with Mike’s Bike Tours. It’s recommended for ages 13+ and the tour is about four hours. I’m not an avid biker but thought the amount of biking was quite reasonable. One woman in our group was having issues – even though the terrain was flat and we stopped frequently to hear stories or look at things. So if you’re really out of shape, don’t do a four hour bike tour. But even if you’re not on a Tour de France team, you should be fine. The bikes did have gears, which we used when going up and over the bridges, over canals.

We biked along the Amstel River out to a cute town named Ouderkerk (though we unfortunately didn’t explore the town). We saw two different windmills and some old (and new) houses, along with cows and sheep. We stopped for a quirky tour of a cheese making farm where they also make traditional wooden shoes. Apparently there are only three traditional wooden shoemakers (making a profit) in Holland, and I’m assuming this was one of them. We brought lunches and ate there.

While there were a lot of people at the bike shop for the tour, they divided us up into groups of 10-12. Our guide was Sam and we all loved him. The kids really enjoyed the tour – and Sam’s quirky humor. It was great to get into the countryside, and we still had the experience of riding our bikes through the city to get there.

Amsterdam has 250 museums! Given that it’s not a huge city, that’s a lot of museums. We chose to visit the Van Gogh Museum. For us, it was either that or the Rijksmuseum, the quintessential Dutch museum. But we thought our kids would be bored at the Rijksmuseum, so we took them to Van Gogh (which I wanted to see anyway).

Here are a few tips. If you don’t want to wait in long lines to get tickets, get them ahead of time. Unfortunately, that means you have to pick a time and date, as they are timed tickets. But we planned our visit for a time when there was a 100% chance of rain, so that worked out. The other bummer is that we bought our tickets through a Tours & Tickets office – you’ll see them everywhere. They sold us the tickets at no additional mark-up, however when we asked for four tickets (with the kids standing there) the seller didn’t tell us that Van Gogh Museum tickets are free for kids 18 and under. So we bought them 17 euro tickets each – which cost us almost $40 US unnecessarily. We were pissed, to say the least (Update: Tours and Tickets graciously refunded the kids’ tickets on our return, after we contacted them about the mistake; the apologized for the error). So know that Van Gogh Museum tickets are free for kids 18 and under and don’t buy them tickets. Lesson learned. You can also buy tickets on the museum website. (You can buy Rijksmuseum tickets ahead of time without having to choose a date/time, and those are also free for kids 18 and under).

About the Van Gogh Museum – we really enjoyed the art and the way it was displayed (to tell the story of his life and work), but it was SOOO crowded that it was hard to really relax there. Angling in to see a painting, especially if it was featured on the audio guide, was stressful. Too many people and that spoiled the visit for me.

You can’t go to Amsterdam and not visit the Anne Frank house. You need to get advanced tickets, or you’ll be waiting hours in line like all the backpackers, with no guaranteed entrance. I would only take the kids there if they know about the Holocaust, and preferably if they’ve already read her diary and know the story. It was not a morbid place, but it’s obviously a heavy subject.

When you enter the museum you’ll get an audio device. The rooms (except the actual rooms which hid the families) have audio commentary. The rooms don’t have furniture in them, but there are some pictures on the wall, showing what it looked like furnished, and you can see photos of the people who worked there and were hidden there. They have some diary reconstructions to view. At the end, they have some additional photos and an 8 minute video with people talking about how Anne Frank’s legacy and diary impacted them.

Tickets are available two months before the date you want to go. Again, you pick a time and you must arrive within 15 minutes of that time.  They don’t have baggage storage and there are a few staircases (I didn’t see an elevator). I don’t think strollers or wheelchairs would work there. It’s a very quiet environment, so keep that in mind depending on your kids.

Vondelpark is Amsterdan’s large park, busy with all types of people. Of course there were bikers, but there were also picnickers, walkers, runners, other exercisers and eaters (there are some restaurants). Spend as much or as little time as you want here. It’s in the Leidseplein district (where we happened to be staying) but it’s in walking distance of the major museums and the central area. Rent a bike, walk through or go in to get a meal.

Airport
Schipol Amsterdam Airport was awesome. We had a few hours there on the way to Tanzania and again on the way home. This is an airport you won’t mind coming to early, especially with young kids. While they have many gate areas, there’s just one terminal.

They have an airplane climbing structure near the food court at one end.

The kids’ science museum, NEMO, has some hands-on exhibits.

Right next door to that, the Rijksmuseum has a small exhibit (though it was closed for restoration when we were there).

A multi-use resting area contains various chair types (including recliners), plus a library with books and grand piano to play.

This restaurant with oversize Delftware was a lot of fun. Inside the tea pot, you can watch videos. You can also sit and eat in the teacups.

The clock was fun to watch.

Good stores! Lots of cheese tasting and stroopwaffel tasting. If you buy cheese and other items on your way out of Amsterdam (like going home), you save on VAT. You have to show them your airline tickets, so don’t buy stuff on the way in. Wait til you’re going home.

(Read 12 random observations about Amsterdam after this).

There’s plenty more to do in Amsterdam. What are your favorites?

One Reply to “48 Hours in Amsterdam with Kids”