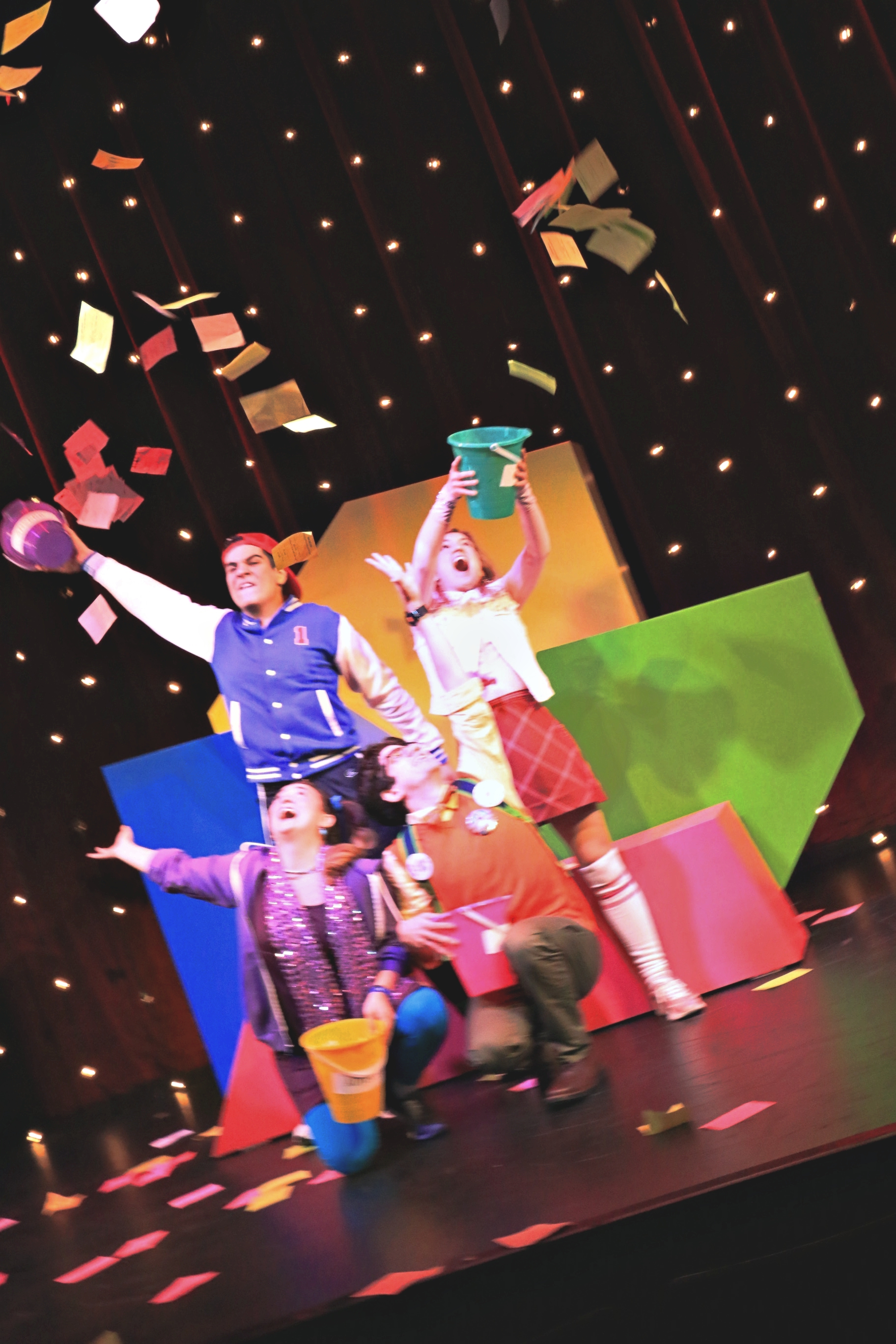 Our family is a big fan of Mad Libs. We play them a lot – on car trips, on plane trips, on line at the amusement park…But a Mad Libs Live show off-Broadway? How would that work? Well, we got to find out. Here’s our review of Mad Libs Live with kids!

Mad Libs Live features four stereotypical high school students: the jock, the popular (or wanna-be popular) girl, the geek and the shy type who doesn’t believe in herself. They come together to compete for the title of Teen Superstar of their high school, and a recording contract (you’ll have to suspend disbelief that the winner of a talent show featuring students from only one high school will win a recording contract – especially since the school isn’t Julliard). We appreciated the humor thrown in there, like the competing group’s name: No Direction, the jock trying to win back his ex-girlfriend (an audience member), and the very, very geekiness of castmate Geyser.

How do they incorporate Mad Libs?

The premise is that the girl who doesn’t believe in herself wrote the lyrics for the songs they’ll perform on the live TV show. But she didn’t have time to finish it and the songs are missing some words. The audience (you) filled in the words for the various sentence parts (noun, verb, adverb and adjective) before the show, and they’ve been sorted into appropriate buckets. Likely the buckets are also stocked with additional words, since they go through a lot of sheets during the show, and our audience size was rather small. During these songs, the actors pull the words from the bucket for the appropriate sentence part, adding them in without any notice.

Okay, but does it work?

Surprisingly, it works really well. Usually the bucket holder looks quickly at the word before handing it to the singer. Presumably it’s to make sure the word is appropriate and the right type of word. We did see a few words either get quickly tossed out on stage, or buried back in the bucket. Often the results are very funny, and the actors sometimes improvise based on the word. They did a great job with that and we give them props for the massive belly flop (my daughter’s word!) performed so masterfully on stage. You also fill out your name with the word, but you don’t have to use your real name. It’s almost funnier if you don’t (though there was a mix – and only a few names are used throughout the show).

The songs are all new for the show and are definitely geared toward a younger age. But they were catchy.

This show is aimed at a younger audience. After watching the trailer on the website before the show, I told my husband, tween and teen that if they hated it, that it would only be one hour of their lives and I apologized in advance. Fortunately the show in person was much better than the quick trailer I watched. The family enjoyed it, even though it really is better for a younger crowd. Most of the audience was filled with parents/grandparents and elementary school age kids.

How long is Mad Libs Live?

The show runs about an hour and is in an intimate theater, so younger kids should be able to sit through it.

When: now through January 3.

Who: the play is geared to families, and especially younger audiences

Where: New World Stages (50th Street between 8th and 9th).

Tickets: $49.50 here, group rates and VIP tickets available too; shows are matinees on Saturdays and Sundays, with 2 each day

Discount Mad Libs Live tickets: use code MLBLANK915 when ordering your tickets to save $5.

Disclosure: We received press tickets to review the show. All opinions are my own.