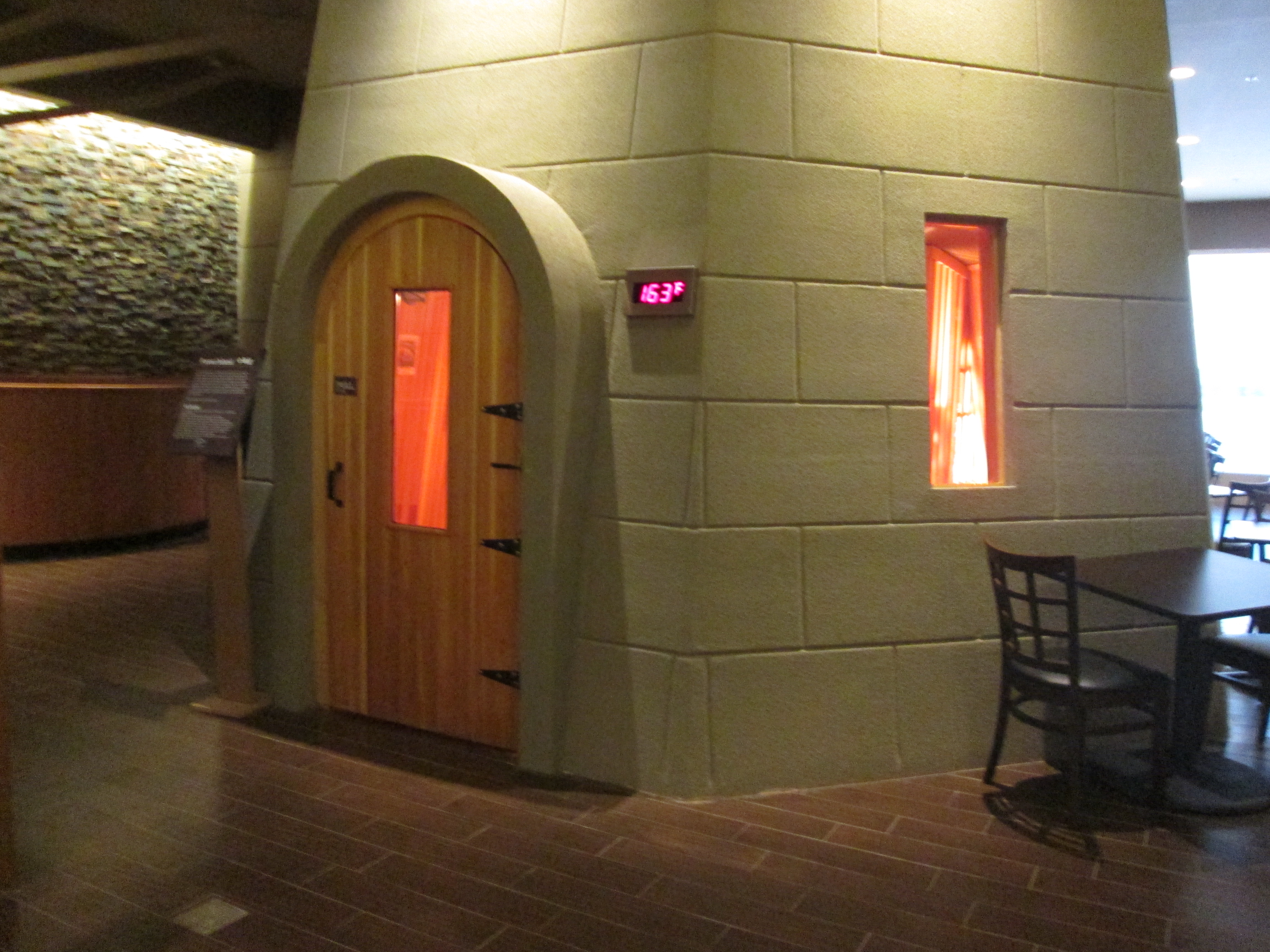 The last two summers I spent a day at King Spa Fitness in Palisades Park, NJ. It’s a huge Korean spa, and one for which non-Koreans like me need a culture lesson before going. I was thinking of going back this summer, when a friend told me that Island Spa in Edison just opened up this summer, in July. In the name of research, I went there instead.

Island Spa and Sauna is on Route 27 in a new strip mall center with other Korean stores (including an H-Mart, which I’ll write about next!). Weekday (Monday-Thursday) rates, at least at the time of this writing, are quite cheap at $19 for a day pass. Weekend rates are $31.50, and include use of all facilities.

When you enter and check in, you’re given a locker key and bracelet with a bar code so you can charge any services and food. They also have small lockers in the lobby area for your shoes (using your key). The spa is a no-shoe zone, though you’ll see staff members sometimes walking around with slippers or flip flops.

The staff was super nice. I’m not sure if they were just nice because I was obviously not Korean and a bit out of place, or because they’re just friendly. No complaints! They took me back to the ladies’ locker room, showing me my locker and signing me up for a requested body scrub. They took me out to see the rest of the facilities as well. Unlike King Spa, you will NOT get lost here. Even though it’s 29,000 square feet, it’s very easy to navigate.

They give you an incredibly ugly “uniform” to wear, which is unisex. It’s mustard yellow with brown sleeves, stamped with “Island Spa” on the front, though I could never imagine anyone taking that home with them. It was hideous. The main area has five “islands” which look like igloos and are headed to various temperatures. The woman showing me around suggested I start at the lowest temperature and move to the higher ones.

Each island has its own explanation as to the healing properties within. I’m not sure I buy that, but some did have different smells/feels than the others. For example, the air in the clay island felt heavier and smelled different than the forest island, even though they were nearly the same temperature. The forest one did smell good, as did Treasure Island, which has slabs of polished geodes glued on the wall. More importantly, the room smelled like menthol, which was surprisingly pleasant.

They have several places you can rest in between, and even a sleeping section (mats on the floor), that part separated by gender. The main area is unisex, though. They also had two television rooms with different kinds of chairs. The shows were in Korean. It was not crowded at all when I went on a Tuesday, and only once did I share space in one of the islands with someone else. Hopefully word will spread so they won’t go out of business, because they had a lot of staff there!

I thought the place was kept very clean. The only complaint was that there weren’t enough water dispensers around. There is one in the dining area, and one in the locker room. I suggest you bring you own water bottle and either leave it outside the island, or keep it in your locker and go back frequently to fill up. You’ll sweat a lot here and you really need to stay hydrated. They should add more water dispensers in the main area.

You can bring kids here with you, as long as they are over 12. If between 12-16, they must be accompanied by a guardian of the same gender (presumably for the locker room and wet areas, which are single sex). I did see a mother and her two daughters there – and one daughter was definitely younger than 12, probably 8. Your kids will have to be comfortable with being nude in the locker room and wet area.

The spa has a number of different services. If you look on their website, you’ll see a lot of spa service stock photos that do not portray their facility, nor the people who go there. Lest you think that the sauna in the wet area looks like that, you’re wrong. They had some rudimentary benches in the single sex dry sauna, not built in.

They offer various skin care services, and massages – either in a private room or in the public (but gender segregated) wet room. I opted for a body scrub, which I’ve had twice at King Spa. To prepare for the scrub, they recommend you spend 15 minutes in a hot tub and steam room to get your body ready. The wet room was really nice. They have four different pools (max depth 2 feet, 8 inches). One is cold, and has a big shower head raining down water in the pool. One is mild, one is medium hot, and the last is hot with an herbal smell. The last three have their own waterfalls in them and bubbling in the middle. The tiles were really pretty in the tubs, sort of irridescent/pearly, and they put bamboo box covers over the drains on the side.

There’s also a steam room and dry sauna there, both of which worked well and were good.

The scrub is a different kind of experience, with a woman dressed in a bra and granny panties rubbing you down with mitts on each hand. You’re completely naked on a table, and if they have other customers, they’re a few feet away with no barriers. It’s not private (though there’s somewhat of a wall separating the hot tubs). The attendant didn’t speak much English, other than saying to turn over or on my side. The service lasts 40 minutes (mine was 50), and they scrub you down until you have peeling layers of grey skin on the table (and then you turn on your side, and then over and it gets all over you). They do use a bucket of warm water to rinse you off several times, so it’s not like you’re covered in the stuff.

If it’s that time of the month, I recommend you skip the scrub. They really do scrub ever centimeter of you, including areas no human has ever touched. And while on your side, they’re moving your legs over so they can get the mitts into your private region. And as for my mosquito bites (actual mosquito bites, not a euphemism for my chest)? The scrubbing felt awesome. It’s almost worth getting bitten up before you go just to have those rough mitts on your mosquito bites. At the end she lathered me up with body wash and had me flip to the other side of the table. I almost slid off. She then washed my hair and conditioned it, and sent me on my way. Next time I might add the massage portion to the end of the scrub. The women’s scrub is $65 for 40 minutes, including tip. The men’s scrub is 10 minutes (and $10) less.

The wet room has several shower areas, and a seated bathing area. You can borrow a pink long scrubbing tower (you have to pay for those at King Spa). They have soap, shampoo and conditioner, as well as toothbrushes to use as well. The locker facilities had hair dryers, lotion, combs, brushes, hair spray, Q-tips etc. A warning that the hair brushes/combs are in a basket and not in cleansing solution, so I’d advise you to bring your own. Also they have nice size body towels and hand towels as well.

They don’t allow you to bring your own food, but eating their food is half the fun. I read something about a food court buffet where you pay by the ounce, but they didn’t have that when I went. I ordered the stir fried glass noodles with vegetables (I had them hold the meat) – this small size was $6 and hugely filling. They served it with a bowl of rice (more carbs!), kimchi and pickled celery and bean sprouts. They had more than a dozen items to choose from – most had meat or shellfish. A few were vegetarian. And they had French fries, the only western item on the menu. I didn’t look at the juice bar menu, but saw signs for a $12 sundae with shaved ice, red beans and some other things.

I easily spent five hours at the spa and wouldn’t have minded some more hang out time, but I had to get home. I will be back. Island Spa sells discounted packages of day passes if you’ll be going more frequently, as well as monthly passes.