**This is part of a series on Philadelphia with kids. Please see all the posts in the Philadelphia series here, or check the bottom for individual links.** 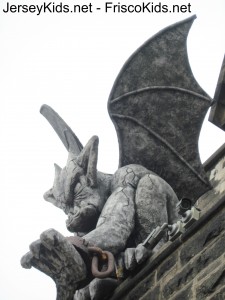 The Eastern State Penitentiary was one of the places at the top of the list for my husband on our trip to Philadelphia with the kids. I went to college in Philadelphia and hadn’t heard of it when in school there. Turns out, there’s a good reason. It only opened to the public in the years since then.

In fact, the penitentiary started making its renewal with fundraising efforts you’ve probably heard of: the Terror Behind the Walls, one of the most haunted, spooky type Halloween experiences in the country.

More on that later.

You’ll learn about the penitentiary through an audio guide included in the admission price. It’s narrated by Steve Buscemi. There’s more audio than you’ll likely make it through with your kids (unless your kids are transfixed). It’s a big place with a lot to learn about.

The Eastern State Penitentiary was the most influential prison ever built, and it inspired more than 300 prisons world-wide. It was the largest, most ambitious prison in the world, built around 1829. The concept was that the jailers believed in the good in all people and crime was a moral issue. The planners (from the Society for Alleviation of Misery in Public prisons, with Franklin as a founder) met at Ben Franklin’s house (you hear his name a lot in Philadelphia!), and they decided to give the prisoners time alone, in silence, to reflect and become penitent. It was a Quaker concept. Read a great Smithsonian article about the prison here.

This prison had running water and central heat, though at the time there was no running water most places, even in the White House. It was a more popular tourist attraction than Independence Hall.

You’ll notice that the prison looks like a castle or fortress. It’s a great exterior, using the concept of looking foreboding, with punishment taking place inside. When built, the facility was isolated on a hill, in farmland 1.5 miles outside of Philadelphia. It was 10.5 acres with a one-half mile wall. The style was Gothic revival. They have some faux arrow slit windows outside (they don’t go through).

The prisoners each had an 8 x 12 foot cell with a bed, toilet flushed with water once a day, and possibly a work bench, depending on their job. The cell had a sky light, wooden floors, and small door to their own private exercise yard. They did not have a door between the cell and the corridor, however. Those were added later, in the 1850s. Instead they had a “feed hole” used to push the food trays through. The cells were heated by furnace, and there was shed in back for that. You can see the feed holes in the picture below.

The Haviland design isolated the prisoners, which helped them avoid typhus. The initial prisoners were typically there for two to eight years, for crimes like robbery, forgery and murder. Typically they did not have a life sentence. If they were to die, they were sent elsewhere.

This is a typical room, with the door leading outside. Prisoners made chairs, wove fabric, dyed cloth and made shoes. Most of the prisoners couldn’t read.  They would be by themselves for 23 hours a day. Guards had to wear coverings over their shoes so they couldn’t be heard walking down the corridor, to keep everything quiet.

They did not track prisoners after their release, so they don’t know how successful this model of prison reform was. Charles Dickens wrote that the isolation here would drive men crazy. Later the prison system was changed in 1913, allowing more prisoner interaction.

The prison was structured like a hub and spokes, with the center for a guard, who could see to all corridors at once. There were seven one-story cell blocks. It was built originally for 256 inmates. Later they made some two-story cell blocks (see below).

As part of the tour you could visit a room with a view from the guard tower, using video monitors. The rookies were given tower duty – no one wanted to work there. It was boring and isolated.

Al Capone was there for about a year. In 1929, he was admitted for carrying a concealed weapon. He got a special extra large cell, decorated nicely, and with music and furniture (see below). He liked to play waltzes. It was on the “good side” of the prison, closer to the guards and away from the locked-up part of the prisoners.

Movies were made here, including the Mad Max video with Tina Turner, and 12 monkeys with Brad Pitt.

As for the kids, I thought they’d really love the penitentiary. My 10 year old son got a little bored after 30 minutes or so. There’s a ton of interesting information and rooms to explore, but I don’t think he appreciated it as much as we thought he would.

In addition to the audio tours (which are good because kids can listen to what they want and go at their own pace), the site has a lot of short live tours called Hands-on History, like at the bocce court, the dining hall, the front gate, or opening a cell, where you can actually DO something instead of just listening.

We missed out on these, but tried to find the tour for the bocce court. It was further than we thought so we missed it, but there was someone stationed there. He didn’t give us a tour, but gave us some information and explained how to play (and he played with us in one of the games, when my son requested). The bocce games were the highlight of the visit for my son, and one of his favorite moments of the trip. Turns out bocce was really popular among the older prisoners, who weren’t as active and didn’t play other sports like baseball. Surprisingly, the heavy ball wasn’t used in fights against the other prisoners or guards.

Speaking of fights, there were 100 escape attempts from the penitentiary, but only one successful one (the tunneling). You can see the area where they carved a tunnel and escaped in 1945. They dug into the wall, and then 15 feet down. They dug 97 feet under the courtyard, equipping the tunnel with lights and wood bracing. Ten inmates escaped, though they were all caught.  The tunnel was supposedly filled with concrete, but there’s been some investigation since then (you can see the movie about it in the cell at issue) where they sent a camera down there, and it’s not completely filled in.

As mentioned earlier, the penitentiary believed in isolation. In the early years, the prisoners were not allowed visits from others. Instead, volunteer ministers and priests would come. Some Jews were concerned that the ministers would convert the Jewish prisoners, and in 1868, one prisoner did convert. In 1913 the strict isolation ended, and the first Rosh Hashana service was conducted there. In 1917, they had the first Shabbat service. By 1924 there were 30 Jewish prisoners out of 1,398. In 1927 there were 42. The largest number of Jews incarcerated there was 80, in 1940. You can visit the synagogue built there, with an ark constructed in 1924. It was likely built by inmates, and designed by a Philadelphia architect. The synagogue has been renovated to its original state, and you can see what it looked like below.

The Catholic chapel office has murals that need restoring. They’re raising funds to do this. We could peek into the chapel office, but not enter it – it was blocked off.

Before opening the prison to the public they entertained other options about what to do with the building. Some suggestions were to convert it to a condo complex or shopping center. Now the city owns the prison. Though it was originally 1.5 miles from the city center (with nothing around it), neighbors began moving in during the 1860s and 70s.

If you’re hungry before or after your visit, Jack’s Firehouse is across the street from the entrance. We didn’t eat there, but I got a recommendation from a local friend that it’s good. They have outdoor seating in good weather.

Of note – If you’ll be seeing a lot of things in Philadelphia, I recommend you look into CityPASS, which provides a discounted package price for five attractions/museums. They include the Franklin Institute, Big Bus Company and Trolley Works, Adventure Aquarium, Philadelphia Zoo or National Constitution Center, and the Eastern State Penitentiary or the Please Touch Museum.

Terror Behind the Walls

We heard about Terror Behind the Walls before going, and briefly considered getting tickets. It’s a haunted house around Halloween time (one of the top 10 scariest in the country) with more than 200 actors, plus special effects. It takes place inside the prison. In 2013, they had six “attractions” where creatures will jump out at you in the dark, even grabbing you and taking you away from your group (you have a choice whether to just watch, or be part of the interactive experience).

We talked to someone working there about bringing the kids, and he recommended not doing so until they were at least 14. They do offer a family night, when they say kids 7-12 should come (yes, different from what the other guide told us), and the difference is that kids can say “monster be good” and the creatures will back off. Kids ages 7-12 get in half-price during the Family Night show (Fridays before 7:30), and otherwise are full price.

Even if you go at other times, you can leave at any time if you’re scared. The journey through takes about 45 minutes, with a possible 30 minute wait to get in (you have timed tickets but need to be ready and there).

Proceeds from Terror Behind the Walls helps to restore the building, and was key in getting it open to the public.

Disclosure: We received media tickets. All opinions are my own.