It seems each year we make a summer trek to the New York Aquarium. This year was different. We made the trek a week or so after it reopened from Superstorm Sandy. Though normally open year-round, the Aquarium suffered flooding to its lower levels (and even a few week on the upper levels), power outages and equipment damage, forcing it to shut down for an estimated $65 million in total repairs ($7 million spent so far). It partially reopened  Memorial Day weekend. 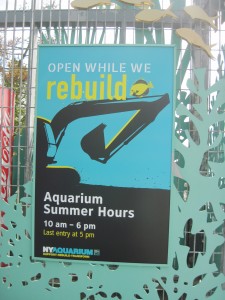 The Aquarium fully reopens in 2016, with a new shark building (Ocean Wonders). Read more about the Aquarium damage from Sandy here (NY Daily News) and also here (NYT) Fees will be reduced while the exhibits aren’t fully opened.

-the underground viewing area of the outdoor walrus, harbor seal and penguin tanks

The Aquatheater is renovated, and the show is similar to ones you’ve seen in the past

An adorable baby harbor seal named Rio was born around Memorial Day and was on view for the first time last weekend. The seal (they haven’t determined the gender) was born to parents Coral and Bernie. According to the education director, the seal seemed quite at ease with the crowds. When the baby came to the surface, it would rub noses with Mom to check in. It was very sweet!

The Aquarium director said that Coney Island brings $58 million into the Brooklyn economy each year, and the Aquarium is the only area venue open 365 days a year (aside from the Sandy disruption of course). The aquarium gets 750,000 visitors a year, while Coney Island got 15 million visitors last year.

While we’ve been to the Aquarium several times, we’d not actually ventured into the amusement parks. The boardwalk and beach looked great, by the way. The boardwalk was not damaged in the storm.

Deno’s Wonder Wheel park is third-generation family-owned/run. Of the 22 Deno’s rides, 17 are for young kids. My daughter is too old for those rides, so we rode the Wonder Wheel ($7 – you get two rotations) and had a great time checking out the views. You can opt for one of eight stationary white cars (our choice) or 16 swinging blue or red cars.

At 150 feet high, they claim it’s the highest in the world. Fortunately since it opened in 1920, there have been no accidents. Though there is a bathroom at the base – for other kinds of accidents (note: you need a quarter to use their bathroom – there are free ones on the boardwalk).

We spent the next three rides on the 24 car bumper cars ($7/ride). And for two of those sessions, we were the only ones there. Woo hoo! Crash central.

Luna Park was built in 2010, the first new amusement park built on Coney Island in 40 years, on the site of a previous park. There was a Luna Park from 1903-1944, so this is the second version of it. One of their thrill rides, the Cyclone roller coaster, is 86 years old. Luna Park is open from Palm Sunday to Halloween each year.

We got the four hour wristbands, but those don’t include thrill rides like the Cyclone ($9/ride), nor some of the other rides you wouldn’t dare catch me on (see photo below). The Steeplechase (start watching 35 seconds in) was fun – and something I hadn’t seen before. You sit on a horse, and ride a sort of roller coaster while wedged into it. It starts really fast (after having you sit there waiting for what seems like forever). The ending is a little too abrupt for my liking, and the pressure from the way you’re seated and pushed on to keep you in place wasn’t so great after eating my Nathan’s lunch (see below).

Outside of the amusement park there are other fun things in the summer. They have Friday night fireworks and Monday night Flicks on the Beach.

The Brooklyn Cyclones stadium is there as well, and their season starts on June 18. Tickets range from $9-17, and on Wednesday nights all seats are $10. They have promotions for most games, including fireworks on Saturday nights, Sunday family fun days (kids can run the bases), and free jerseys for the first 3,000 who enter on Thursdays.

And of course there’s Nathan’s Famous hot dogs. Actually there are two Nathan’s not far apart – one on the boardwalk and one very close to the subway station. Unfortunately they list the calories on the menu, so I know just how much weight I gained from those cheese fries and corn dog.

And then it was back to the subway for the one hour ride to midtown! Next time we’re hanging out on the beach.

Thank you to the New York Aquarium, Luna Park and Deno’s who hosted us. All opinions are my own.