I haven’t seen Whip It, the roller derby movie with Drew Barrymore, but now I want to. We’ve been to our first roller derby match, and it was awesome!

This indoor track sport has a set of rules that is easy to understand on a basic level. What’s harder is to figure out what’s legal and what’s not legal.

Basically, there are two teams. Each team starts with four blockers (or rather, three blockers and a pivot), and one jammer. The jammers start skating behind the blockers, and try to pass them. For each blocker from the other team that the jammer passes, the jammer’s team gets a point. The match consists of two 30 minute rounds, and within each round is a series of two minute (or less) “jams.” The lead jammer (the one who gets out first) can end the jam by flapping her arms like a chicken.

While they are skating around, the blockers do their thing by hip checking, elbowing, holding hands, and doing what they can to prevent the other team’s jammer from passing. 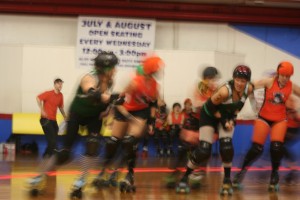 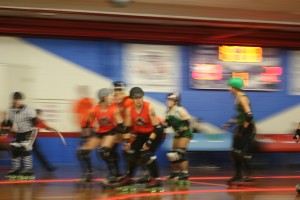 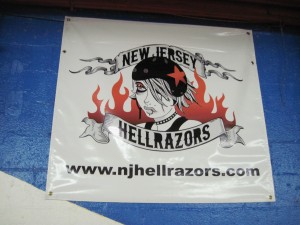