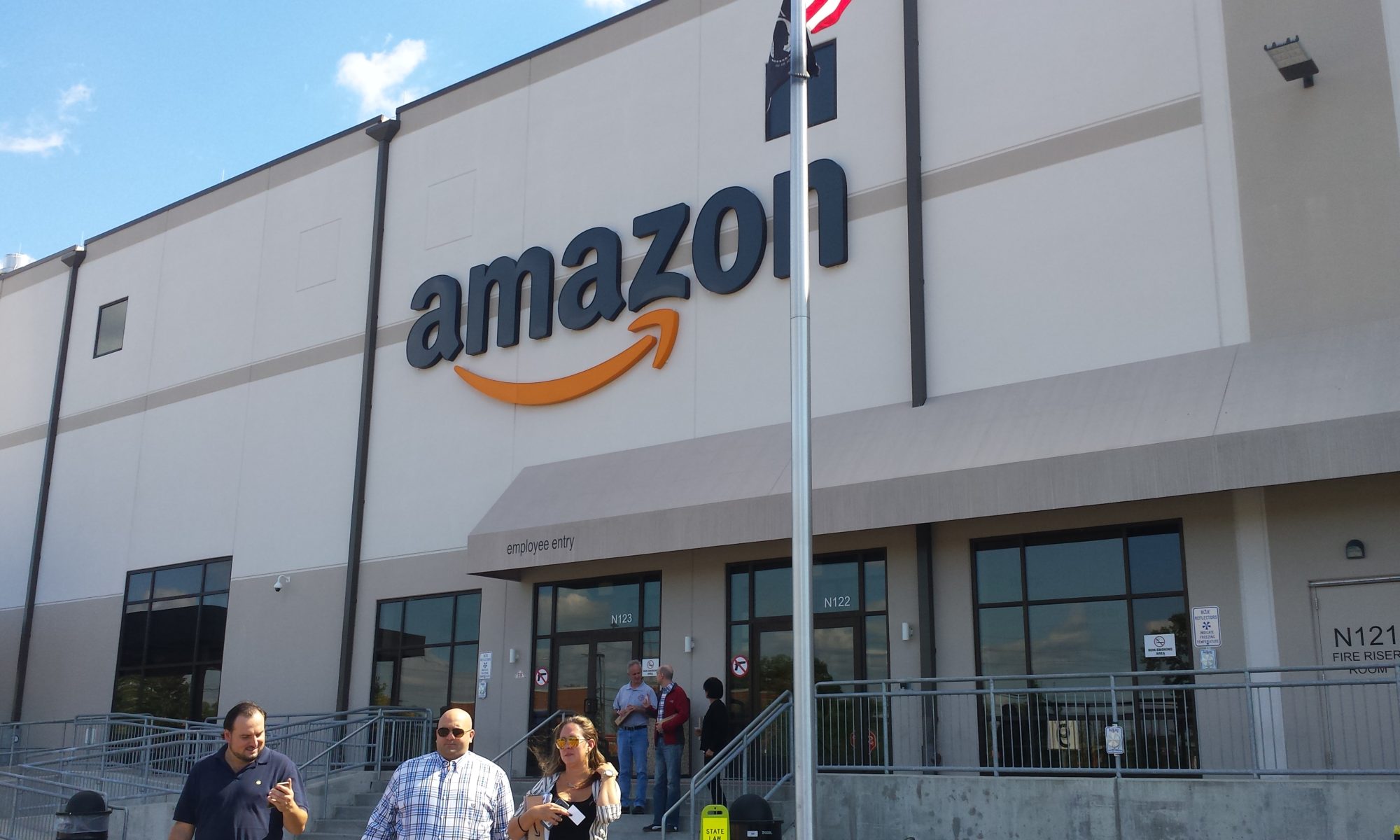 I write about supply chain management (logistics, operations, transportation etc.) so touring an Amazon fulfillment center (FC) seems like more than a fun thing to do – it seemed necessary for work! There are currently 23 warehouses/fulfillment centers in the U.S. that give tours, including 3 in New Jersey. You can take an Amazon tour with kids, but most tours are on the weekday, which can make it difficult unless you’re home schooling. Here’s what I learned on my Amazon tour.

By the way, you can’t take photos inside the warehouse, so these photos are screenshots from a virtual tour last week, run by Amazon for FIRST Robotics – an international STEM robotics program I’m involved with. You can watch the virtual Amazon tour here which was meant as an Amazon tour with kids, or at least for kids.

All Amazon fulfillment centers are named after a nearby airport. I visited the Edison, NJ one, which ironically is named LGA9, as in LaGuardia. That’s because there are 10 warehouses in the Garden State, with many named after EWR already.

The LGA9 building handles packages up to 18”. This center has been open since October, 2017, and is a robotic sorting facility. After an introduction to the facility, we received headsets to wear in the building, connected to our guide’s radio. I heard that in other centers, they let you keep the Amazon headsets, but we did not get to keep ours.

My review here will not be in the same order as the tour.

We visited the stowing area, where humans opened boxes and placed the items to sell into the pods. There are thousands of these pods at LGA9, and items are “randomly stowed,” meaning that there’s no order to the stowing. The pods have a bar code, and each inventory spot has a bar code. Items stowed have a bar code. These bar codes differentiate between an Amazon-sold product versus a vendor-sold product that is stored and fulfilled at Amazon. (Fulfillment is the process of storing, picking, packing and shipping a product to the end customer).

Most items arrive bar coded, and products may make a stop at another facility to get barcoded before going to Amazon (they didn’t tell us this on the tour, though). LGA9 has more than one million units in the warehouse – individual product types.

There’s a stationary bar code scanner at the station, and the employee scans the item and puts it into an open spot on the pod, based on space. If the machines shine a purple light on a pod section, the employee will not put the item there. The light shines if there are similar items already there (like purple socks when you’re stowing blue socks), so they don’t overstuff a slot, or if it’s the wrong size/shape for the opening. Once the item is in the bin, you can purchase it.

Items are also moved between fulfillment centers, in larger totes that get stacked up by a robot, at the “palletizer.” We didn’t see this on our tour, only on the virtual tour.

This Amazon FC uses a semi-automatic process. It has robotics, but also has human pickers and packers. “Pickers” have stations with computer monitors and yellow “totes” or bins. The robots line up with pods by the picker, since they’ve already gotten instructions (thank you computer programming) of what item are needed and where. It’s prioritized by what pods are closest to the picker. The picker sees a photo of the item to pick from the pod, and a white line will shine on the pod storage area. The picker takes the item and scan it, checking the photo. A light will light up in front of the tote to put the item into (5 totes at a time for the picker).

When the totes have the needed items, they go into a tote elevator, bringing them up to a conveyor belt. The belt takes them to the packing area. There are 40,000 yellow totes at LGA9, and thousands of the big pods.

We also saw grey bins, which are for sending multiple items. The guide would not tell us how items get put together – “that’s the secret sauce,” she said. But the grey bins were moving so much faster than the yellow ones on the conveyor belts and I was surprised more things didn’t fly off. We did walk by the area where employees were putting items in the grey bins.

The most amazing thing to watch at the fulfillment center is the robots and pods moving. They are in a fenced-off area. The FC has hundreds of robots, all made by Amazon Robotics. They zip around and pick up pods that weigh 750 to more than 1,000 pounds, according to the virtual tour or 1,500 pounds according to our guide (it depends on the robot I guess). The donut shape on top balances the pods perfectly, while moving them to and from pickers and stowers.

The robots weigh about 300 pounds, and can run for 10 hours without charging. When they’re getting low on charge, they can finish their task before going to a charging station to charge for a few hours. They can get a short charge (less than an hour) or a longer one for a few hours for a full reboot.

The system may send in three robots to retrieve one pod, as other pods must be moved out of the way. The robots move autonomously and turn at 90 degrees, even while under the pod – the pod stays in one place, and the orange part of the robot (and whatever is underneath) rotates.

LGA9 has three fenced in robotics areas. Employees wearing radio vests can go on the robotics floors, and the robots go slower (or stop) when there’s a human there, depending on their location. The robots can judge how far away the person is, when wearing the vest. A person may go in when something falls off the pod, which happens sometimes.

Boxes don’t have your name on them or shipping information on them until they go to the label machine. They have a “spoo sticker” which is a barcode, like a license plate. The information is encoded in that.

Amazon has more than 20 box sizes, which you’ll see stacked up on the floor (unfolded). The computer tells the packer what box to use, and dispenses the exact amount of tape. Some items are “SIOC” or ship in own container, like a sturdy box of detergent or diapers. There’s a machine to fill plastic pockets with air (Airplus Storopack – a big plastic roll) that are fun to pop later, and the Venom tape (the black flat paper-like tape) is water-activated (also automatically dispensed).

After the item is packed, it goes on the conveyor belt to the SLAM line. That stands for “Scan, Label, Apply, Manifest.” The machine scans the item with a red light and weighs it, with the information going to the cloud and back, to the label machine six feet down the line. That machine prints all label information, differentiating for shipping service (like UPS, FedEx or USPS), and applying the label with a puff of air. If there’s a problem, the package gets get kicked down to a person, a “problem solver.”

The packages continue on the conveyor belt to a big overhead scanner using a red light, telling the conveyor belt what lane will get the package. There are smaller conveyor belts as part of the larger ones, that run the opposite direction. That’s apparently what causes packages to get shot into differing shipping lanes automatically.

The conveyor belts for each shipping lane go into trucking areas, so the packages can be loaded into the right trucks. The conveyor belt extends into the trailer to where employee is manually loading trucks.

At the end of our tour, they answered some additional questions, and then gave us Amazon FC tour water bottles, which were nice!

If you go – Amazon tour with kids

You make Amazon tour reservations online. Most reservations are during the work day. When I checked today, Edison has no openings, but Robbinsville has a bunch.

How long? An Amazon tour with kids or with adults last about an hour.

Walking distance: You’ll cover 1 kilometer on the tour. If you can’t climb stairs, you can use the elevator. They are ADA compliant.

What to wear/bring: You need to wear closed toe/closed heel shoes, less than a one inch heel. One woman in our tour group was wearing a heel higher than that, and they made her change into sneakers they had in the tour room. Don’t be that person. You need to pull back long hair to shoulder/above shoulder length. No loose fitting clothes (scarves, long jewelry, ties) – I did tie a sweatshirt around my waist, and they said nothing.

Who can go: Want to take an Amazon tour with kids? You must be at least 6, and minors must be accompanied by an adult.

Group tours: They will schedule group tours for 10+ people – just email them at tours@amazon.com.