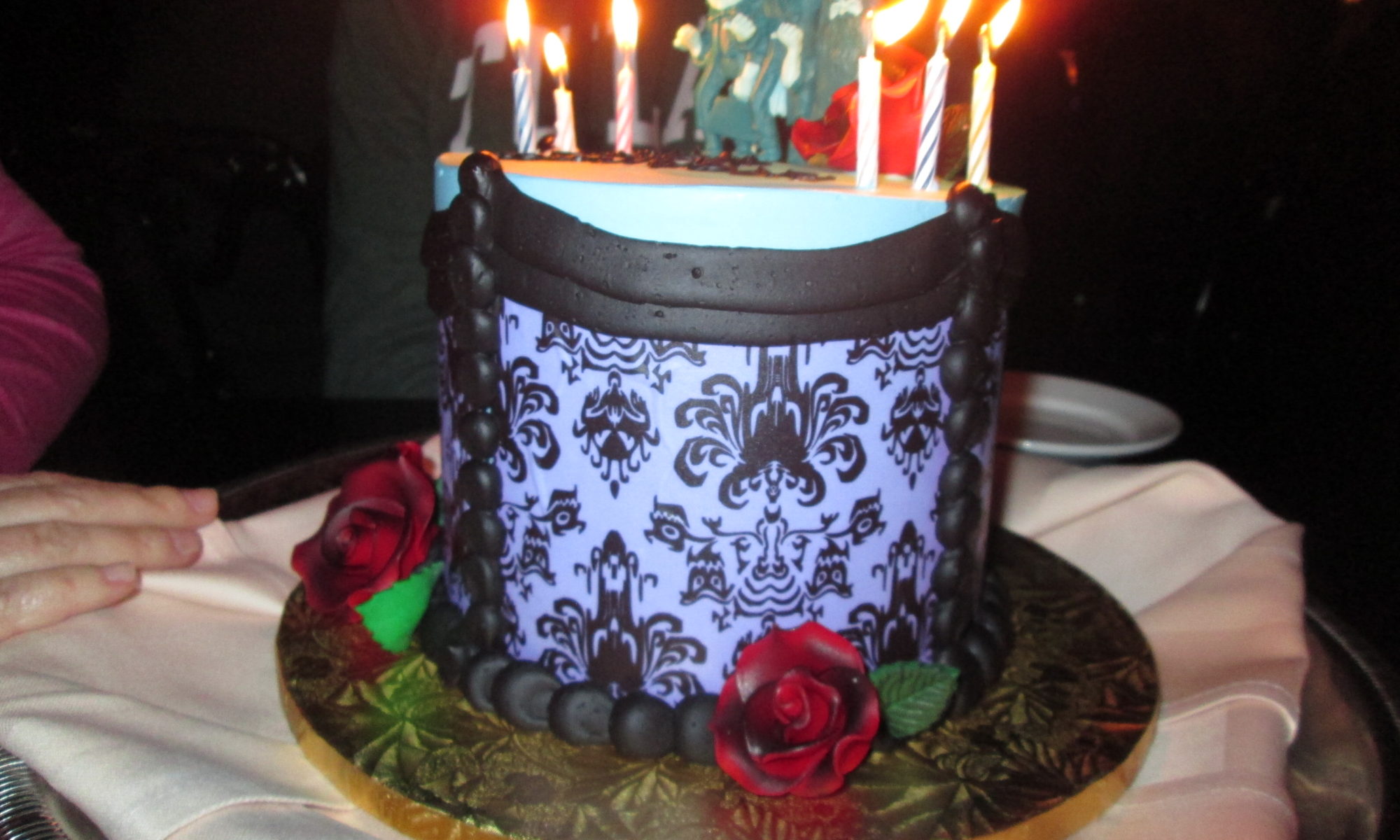 For the first time in many years, we visited Disneyland when it wasn’t Passover, and we could actually eat whatever we wanted. The plan was to get churros, as we always talk about that but aren’t able to eat them during the holiday. This year when my sister said “let’s get a churro” late afternoon, I told her to wait until after dinner. I had another plan. An official Disney cake.

Our trip to Disneyland was right in between my daughter and my sister’s birthday, though this was not top of mind when we made reservations for the Blue Bayou, where we always wanted to eat, but didn’t bother, given holiday restrictions.

I decided to surprise them with an official Disney cake. You can’t order or find official Disneyland cakes online. They said it’s because of quality assurance, but I think they don’t want anyone to steal their designs. You have to call to order it – I called and waited 20 minutes online for someone to answer.

They have several options for an official Disney cakes to choose from including Mickey, Minnie, Princess, Cars, Frozen, Star Wars, and Haunted Mansion. I was so excited to hear them say Haunted Mansion. Of course they couldn’t point me to a picture online, but I did find one blog post that had one posted – it wasn’t exactly like the one we got, but it was pretty close. When the Disney woman described the fillings, I really got excited. In addition to what I assume are the traditional chocolate and vanilla (I don’t even remember her mentioning standard flavors), she said there was Dole Whip or churro options. CHURRO!!!! The cake is cinnamon/sugar and the buttercream frosting inside has churros mixed in. I was sold.

The smallest official Disney cake is a 6″ round cake, which sounds small, but she said it serves 8-10 people, for $60. We only had 5 in our group, so I was hoping they’d have a cake box. I gave her our reservation number and she said the cake would be brought out after dinner, with a candle. You don’t pay for it ahead of time – it’s added to the bill. Given that it’s Disney, they have their logistics in order. When I checked in for dinner, the hostess said “I see there’s a birthday!” which was not good for her to say aloud, since no one but me knew we were celebrating the birthdays. Fortunately no one in our group heard.

We had fun going through the dessert menu and deciding what we’d order, since our group was under the illusion we might actually order dessert.

Sure enough, after dinner our waitress appeared, and started lighting candles. I had to point to an empty spot between my daughter and sister – my sister assumed it was for my daughter, and my daughter was just confused.

The official Disney cake blew away all expectations. It was gorgeous. The top was a light blue color, and the sides were dark purple with black decorations, the wallpaper you’d see in the Haunted Mansion. During several trips through the Haunted Mansion, my family thought it was odd that I pointed out the wallpaper to show them how much I liked it. Ahhhh….now it made sense. I wanted them to recognize it. There was black draping on the bottom and top of the cake, and red roses that were sprayed with black, to show they were dying. And on the top, the 3 hitchhikers.

I was told on the phone that the hitchhikers were made of white chocolate. And that’s possible. It looked like wax, but we did bite off a thumb and it eventually melted in my mouth. So it’s edible, but didn’t really taste good. The roses weren’t that good either, but they were dramatic.

The official Disney cake and the rest of the frosting was delicious, with thick buttercream frosting. We ate less than half of it at dinner. As for the cake box, unfortunately they had none. But they brought a few takeout containers, so we cut up the masterpiece and shoved it in there, so it did not look very pretty when we took the rest home.  I regret I didn’t take a picture of the inside of the cake.

After dinner we went straight for the Matterhorn. While the kids thought the cake would be fine at our feet, there was no way I was taking that on a bobsled ride. We asked the ride guy if we could put the bag by the exit gate, and after some hesitation, he let us. I was prepared to ride in 2 shifts if needed!

Needless to say, the cake made for a great breakfast the next day, and lunch, and dinner.