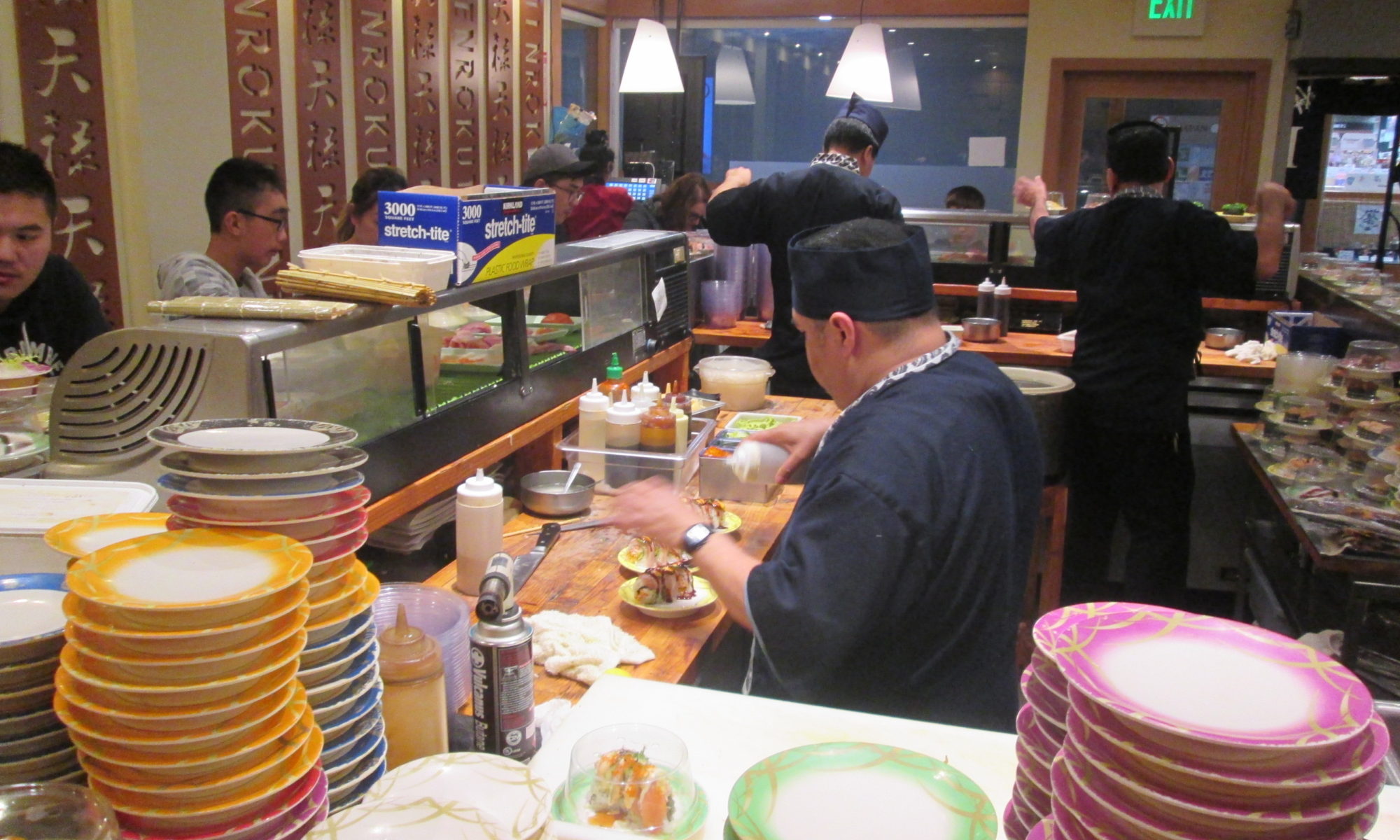 *This is part of our series this week on San Francisco.*  Japantown San Francisco is one of my favorite places. And my teen son loves it too, so when we were spending our spring break in San Francisco, that was first on his list to see. Japantown is basically the Japantown Center, an indoor mall, though there are some stores outside there as well.

Here were some of the highlights:

We found out the Isobune Sushi, the restaurant where the sushi goes around a moat on boats, closed last fall. Fortunately there is a sushi conveyor belt restaurant – not quite as charming, but it did the trick. It’s Tenroku Sushi. If you haven’t tried this before, you sit around the outside of an island, with the sushi chefs inside. They prepare various sushi items and put them on different color dishes. They put them on a conveyor belt and you pick the dishes that you want, when you want them, and eat them. Each color plate has a price, and the waitress adds up the prices at the end. It’s fun to try a few pieces at a time, and it’s easy to share.

We were intrigued by all the liquid nitrogen smoke emanating out of the Chocolate Chair ice cream store. They also make liquid nitrogen ice cream. Dragon’s breath is basically sweet cereal balls (like giant Trix), served with liquid nitrogen. So when you eat them, you blow out smoke. It’s novel. We got one cup for $5 to share, and we didn’t eat the whole thing. It’s kind of gross to eat, but fun. A warning: my friend who is a pediatrician treated a kid who injured his throat after eating these. I looked it up – and it’s a thing. So be careful.

My son and his friend spent way too much time in the manga and Japanese anime store. Actually there is a big bookstore, Kinokuniya, there as well, and he bought some new books. If you’re a manga fan, you’ll love the Japantown Center. Plus they had lots of stores with cute and weird things.

Benkyodo is known for their mochi. Buy it by the piece, or by the box – choosing your own flavors. They’re closed Sundays and Mondays.

If you like origami or paper in general, go to the Paper Tree, right next to Benkyodo. They have beautiful papers and lots of origami. They even have an origami dragon created out of a six foot uncut piece of paper. It’s amazing.

Here are a few fun photos of what else you can see in Japantown.

Smitten Ice Cream (there’s one in walking distance of Japantown)