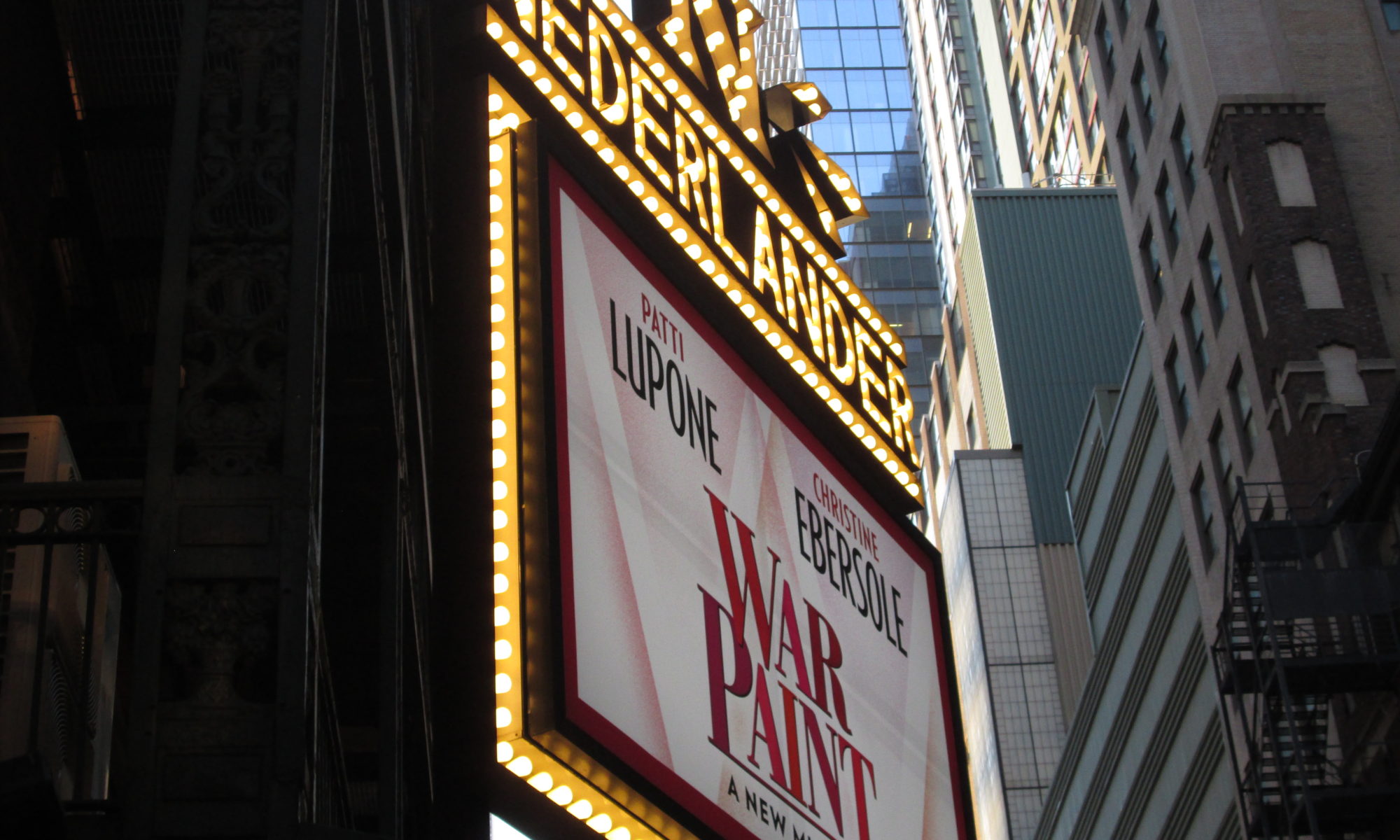 How can you not want to see a musical featuring Patty LuPone and Christine Ebersole, two giants of the Broadway stage? I was shocked to see these tickets discounted, relatively early in the run (admittedly this review is from late July). War Paint is closing on November 5, earlier than expected as Patti LuPone is getting hip replacement surgery. So get your tickets now!

The show is about two smart business women who changed the world, through beauty, Helena Rubenstein and Elizabeth Arden. Before them, make-up was not worn by classy women. These two bitter rivals started their own woman-owned companies, using product design, packaging design and marketing to make beauty products (creams, makeup and spa services) must-have and high-end items. In spite of hating each other, they had similar businesses and fed off the competition with each other. They stole each others’ staff members, reported each other to the FDA (which later required product labeling that caused a lot of problems for them) and pushed each others’ companies to differentiate themselves to earn more. It wasn’t all the most ethical, but there’s a reason why the FDA regulates these things, and why marketing claims need to be backed up!

While they looked quite different, both women were immigrants – Rubenstein a European Jew, and Arden a Canadian WASP – that immigrant history tying them together even though they wouldn’t admit it.

The set is amazing. Beautiful and large-scale visuals of the Red Door Salon with its pink products, and Helena Rubenstein’s more clinical black/white theme. Rubenstein was an art collector and very interested in portraits of herself. There’s a stunning scene toward the end where her art work is hung from the ceiling, showing her money, power and yes, her self-interest.

The singing is gorgeous and powerful. The lyrics and songs didn’t stick with me, but I enjoyed them.

Is War Paint appropriate for kids?

I did not take my teens (they were out of town) but I wouldn’t hesitate to. I was sitting next to two teen boys who looked to be around my kids’ ages. They didn’t seem like they’d been to a lot of Broadway shows. I asked them what they thought of it, and they said they were enjoying it and they thought it was appropriate for them. Granted they didn’t know me, so maybe they were just being polite. But they seemed to enjoy it. I’m not sure younger kids would appreciate the plot.

One thing I loved about the show was seeing powerful women on stage as the leads. Not just the actresses, but two business women who really did change an industry and make a ton of money. While their story was scrunched together for the sake of fitting it into a 2.5 hour musical (with intermission), it prompted me to do some more reading about their fascinating history. And it wasn’t until I got back to our room that night that I realized I had used an Elizabeth Arden compact that I keep in my travel bag. It wasn’t the usual pink!

We were in the last row of the orchestra section. While the balcony did overhang a bit, cutting off the top of the curtain during intermission and at the beginning, the view was just fine for the show.