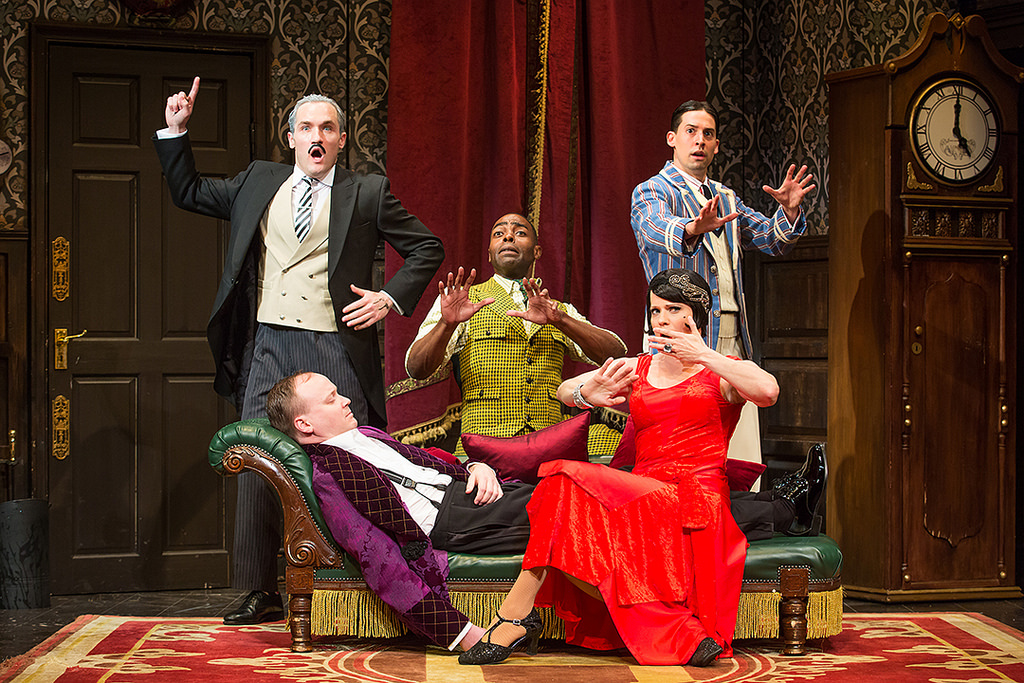 If you find yourself looking for a play that both you and the kids will enjoy – that is not a Disney-type show aimed at kids – The Play That Goes Wrong is a great option. I took my teen daughter and realized that my younger nieces would have loved it as well.

The show starts even before the curtain time.

You’ll be looking at the set when you come in – not at a curtain. It may take you a bit of time to realize that the stage hands adjusting things on the stage (or perhaps the person in the audience leading everyone in a Happy Birthday song) actually are part of the cast. The show starts before the show starts!

The Play That Goes Wrong is very much a physical comedy, in addition to a verbal comedy. They do stupid things and it’s funny. Things fall down. People trip. They bang into things. They drink poison instead of liquor. I still can’t believe that set has held together with as much movement as there is in the props and walls. It won a Tony for best scenic design of a play this year, so that says something!

This is a play within a play. The cast is performing the show The Murder at Haversham Manor as part of a campus theater group. You watch them perform the show. This cast is much bigger than some of the casts in the past theater group, so much so that they had to change the past show names to “Cat,” and “The Lion and the Wardrobe” to accommodate the smaller cast size. The Playbill actually has an additional cast Playbill inside, one for the Murder at Haversham Manor, and one for The Play That Goes Wrong. It’s very meta.

So yes, the show is a murder mystery set in England. It’s not that complicated a plot.

Is The Play That Goes Wrong appropriate for kids?

I always get in trouble for this with readers, as I’ll say I didn’t hear any bad words and then inevitably someone comments that they don’t know how I missed hearing 35 F words and their children are scarred for life. So at the risk of getting told that I’m wrong by readers, I don’t recall hearing bad language.

The only sexual content was some skimpy clothing worn by one of the female characters, and the notion that one was cheating on her man – though all we saw was an attempted kiss a few times. And you could see the woman’s underwear more than once, but it was part of the physical humor and nothing revealing.

We found ourselves sitting in the mezzanine (which isn’t a surprise, since I purchased my tickets). I think it was even the last row. We could see just fine (and we were close to the bathroom)! While we were in the middle section, it didn’t seem like those on the sides would miss much (unlike when we went to see Oh, Hello! And we were on the sides in the mezzanine and did miss a little bit). We bought tickets that day, and while unable to get the discount Broadway tickets I usually score, we still paid only $47 or so each, for the last row – seats I won’t complain about at all!

What: The Play That Goes Wrong

The play runs about two hours, with one intermission.