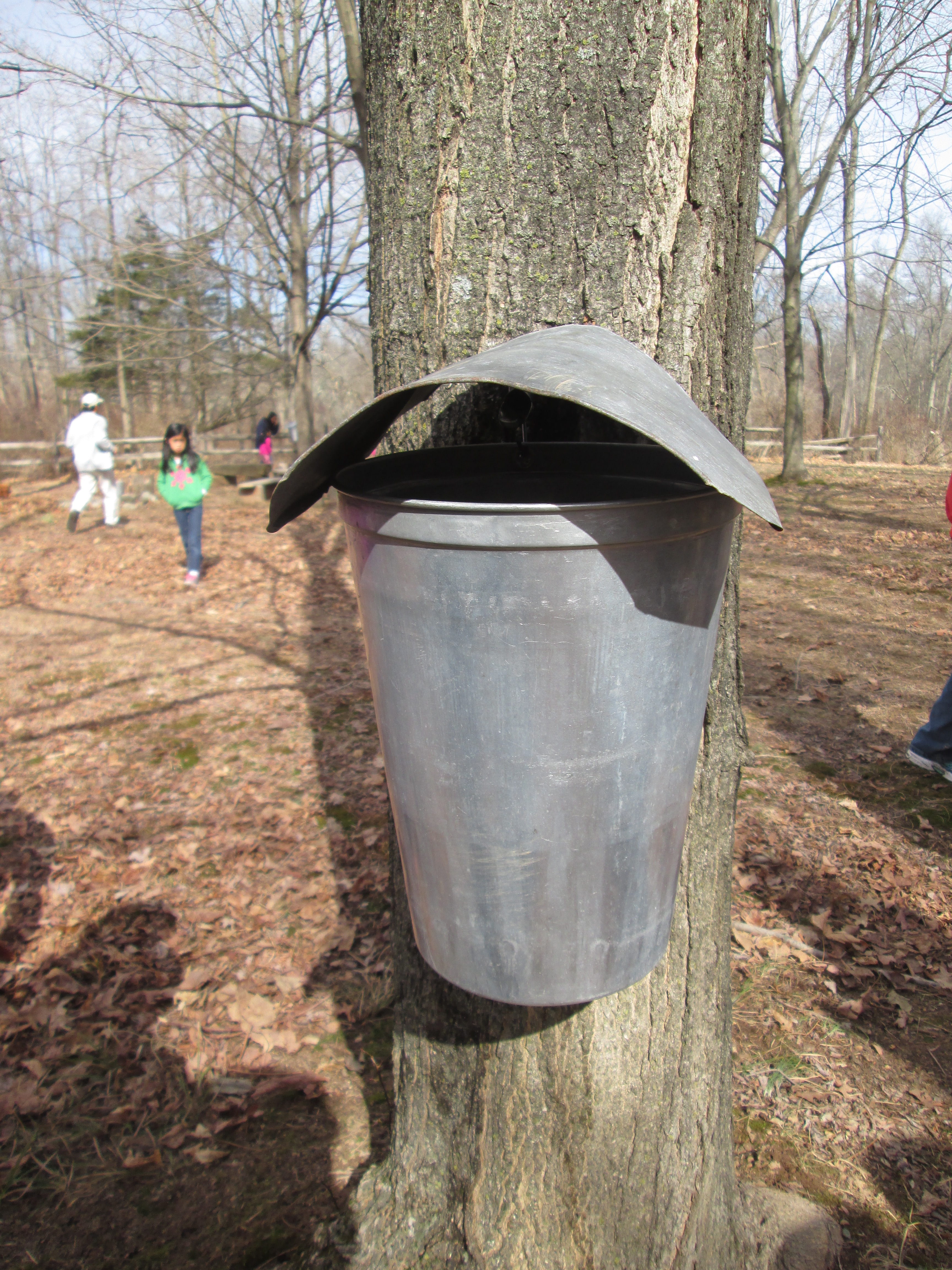 We went to the Great Swamp in New Jersey for our education. They were offering two sessions on a weekend afternoon – for $3/person (though no one asked for or collected money – and we checked in at the outdoor education center desk).

While there’s no way to know for sure who discovered maple sugar, our naturalist shared a fable with the group. I won’t get into details, but the kids were paying close attention. Let’s just say that the Native Americans were using the maple sap long before the colonial settlers were. Here we focused on the Lenape tribe, who lived in the Great Swamp area 500 years ago.

The key take-home lesson for me for the maple sugaring tour was that the sap that comes out of the tree, dripping like water, tastes like water (I know, because we got to try it straight out of the tree). There’s no hint of sugar, no dark coloring.

That’s because maple sap is 98% water. After the Lenape tribe discovered that by boiling down the sap, it turns to sugary syrup, or just sugar, they made bricks of the sugar. They used hollowed out logs, placing hot rocks inside, to boil off the water.

While the maple taps have changed in look and materials over the years, to get the sap out you need to make a hole in the tree. By hanging a bucket on the spigot (drilled in several inches, to hold the weight) and putting a cover on the bucket, you can avoid most bugs and dirt from getting into it, and to prevent the animals from drinking it. The spiles (the name for the peg that goes into the tree) in the past were made from iron (which rusts), lead (uh, lead poisoning?), stainless steel and now plastic.

Those making maple syrup batch the sap, boiling it down in batches using big pans and later small pans. The colonists developed their own “lazy man’s balance,” which looked like a large scale with a bucket of sap hanging over the fire. When it was heavy with water content, it would be right over the fire. As the sap lost weight, it would rise, which meant it needed less heat and wouldn’t burn. That let the colonists do other things, and not be trapped watching the sap all day.

The naturalist told us that a tree must be 10 inches in diameter (about 40 years old) to tap the sap, and that 10 inch diameter tree would only support one spile. A 15 inch tree would support two spiles, while a 20 inch tree can take 3, and a 25 inch in diameter tree can use 4. While the sap is close to the bark, the spile is driven in two to three inches (angled up a bit) in order to hold the bucket’s weight.

If you wonder why it costs so much to buy maple syrup, consider that it takes 40 gallons of sap to make 1 gallon of syrup. The naturalist said that in Vermont, where they manufacture a lot of maple syrup, they hook the spiles up to plastic tubing, which runs downhill into drums. Then the sap goes through an evaporator tray.

As for grading, the grade depends on the time of year the sap is pulled. The first run of sap is the most pure – called “golden delicate” and is light in color.  You won’t find this in the stores, the naturalist said. Grade A is amber in color. You can also find maple syrup described as dark, robust and with a smoky flavor. You can boil down sap from other trees, but it won’t taste the same.

The sugar shack at the Great Swamp is able to boil down the sap to make maple syrup, but it’s a time-consuming process, so they don’t do it frequently. At the end of the tour, they pour out some maple sugar samples (from Costco, I think, not home-made), so you can taste what you’ve been learning about (granted, if you’re like us, you know very well what maple sugar tastes like).

The tour was definitely geared to the young kids, with a lot of participation and language aimed at them. Yet it was still interesting to adults.

Before or after your tour, head downstairs in the education center, to see their newly opened exhibit of the wildlife and habitat of the Great Swamp. Definitely kid-friendly, with lots of hands-on activities. It was free.

Great Swamp Outdoor Education Center: they are unfortunately done with demos for the season, but put this on your calendar for next year.

They ask you to get there 15 minutes early, which is a good idea, because you have to hike over to the sugar shack. When we went it was very muddy, so think about the recent weather if you go, and wear the appropriate footwear (we did not). Some of the walk is covered in planks, but not much, there was a lot of mud. The walk was not difficult, but can be if you have any physical limitations.

Other places to go for maple sugaring:

Red Tricycle has a list of maple sugaring demonstrations in New Jersey and New York.