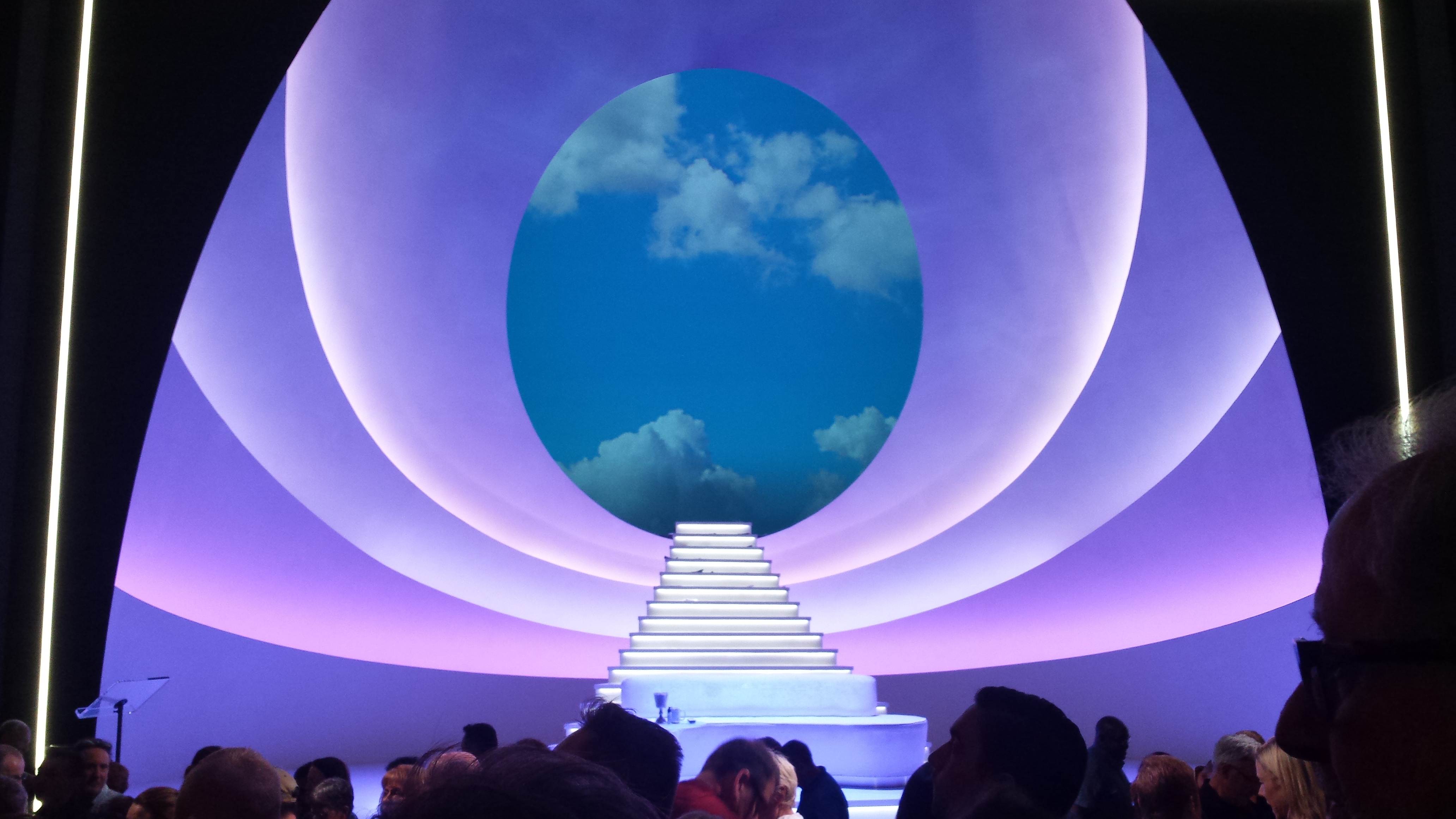 If you’re not familiar with the premise of An Act of God, the show is basically a monologue with God coming to you through the physical body of an actor (in this case Sean Hayes). God riffs on a whole lot of things, including misconceptions about God and the 10 Commandments. And then he introduces a new set of 10 Commandments because he’s pretty sick of the old ones and never intended those to be his greatest hits.

God is accompanied by two archangels, Gabriel and Michael. Gabriel is the serious one who reads verses from the Bible when asked, as well as reading off the new commandments. Michael is the questioner, asking his own questions as well as going to the audience to pick on those in the “expensive” seats up front. There’s definitely some audience participation and stand-up type humor, but no, the audience doesn’t actually get to ask questions.

The show is very funny and extremely irreverent. Ultra-religious right wingers may not enjoy the show much, but then again, they probably wouldn’t buy tickets in the first place.

God makes fun of all types of people in the show, but makes it clear that he’s not anti-LGBTQ, showing that in the beginning, he made Adam and his helpmate Steve (with a great vocal impression of Steve). Steve was later turned into Eve (and can use both bathrooms – the show is definitely updated based on current events).

Some of the (spoiler alert!) revelations in the show:

-God admits the oddity that the Booth Theater is named after the famous assassin’s brother, and the irony that the assassin shot the president in another theater.

-God admits that it’s not us, it’s him. God makes mistakes, after all we’re created in his image. He’s not perfect. “I made humans in my image – I’m an asshole.”

-Don’t put your faith in God or the New York Jets. “Faith is not rewarded.”

-In 6,000 years, God has not reached out to the most populous people country on Earth, the Chinese. That is bad from a recruiting perspective.

-God doesn’t want a personal relationship with you, though sometimes he messes with politicians’ heads, like Ted Cruz.

-There are no “God-given rights to bear arms.” It’s not in the Bible – have you seen guns in the Bible?

-About the heavy question “why are you here?” The answer is obvious. You couldn’t get tickets for Hamilton. (But Hamilton is only on the $10 bill, whereas God is on all U.S. currency).

-Which came first, the chicken or the egg? “The rooster came first.” Yes, it’s a sexual joke.

-Humans don’t always understand what God meant in the Bible. When God says not to lie with men the same way he lies with women, he literally meant you should tell untruths in a different way to men than women.

-There are some liberties in the Bible stories. There’s no way God actually said to bring two animals of every species on the ark, as that would be physically impossible. God could easily replicate the animals after the flood, after all, God can do anything. What he really said was to bring two puppies, because they’re cute and so Noah’s family wouldn’t get bored on the ark during the flood.

-You don’t need to tell God why you’re asking for everything, because God already knows. His favorite word is “amen” because that means you’re done with your incessant requests.

-God does not care who wins the sports game and doesn’t want you to cheapen his brand by giving him credit for a win (or for Kanye to give God credit for his talent). He may, however, affect the sports spread.

-When talking with Abraham about circumcision at 8 days, Abraham argues instead that the covenant should be breast augmentation for women at age 18. God considered it, but decided to go with circumcision.

I didn’t expect the set to be much, other than the white couch I saw in promotional photos. But the set was awesome. As you can see from my photo, there’s the couch (barely visible in the photo) and staircase behind it (that lights up various ways depending on the need), and the curved white walls (not sure what to call them) on the side of the staircase that also light up. At the top of the stairs, the tablets holding the 10 Commandments comes down (and it’s actually a digital display, much like on Family Feud – that was fun). Also, the background has computer graphics, including clouds going by for most of the show, but some other backgrounds as well. And I won’t spoil it, but the very boring beginning of the set, with a plain black curtain? Watch that curtain when the show begins. It’s a great opening.

Is An Act of God appropriate for kids?

It depends how old your kids are. I probably wouldn’t bring anyone younger than a teen, given the sexual humor. There were a few curse words in there too. The other thing to consider is how your kids think about God. While this is by no means a drama or serious questioning of theological issues, at times, the show does bring up some of those serious questions, like why is there human suffering, why did the Holocaust happen, why people shouldn’t use God’s name during sex…It depends how mature your child is and how much you want them to hear that God is watching you when you masterbate. Well, maybe you do want them to hear that.

An Act of God is said to be 90 minutes, but our show was slightly less than 75 minutes. There’s no intermission. The Booth Theater is pretty small, so it seemed that the seats were all good, including balcony seats. The bathrooms in the basement weren’t too crowded 20 minutes before the show.

Discount tickets to An Act of God: You should be able to find discounted An Act of God tickets at the usual spots. Check out our Broadway web page for discount ideas at the bottom of the page.