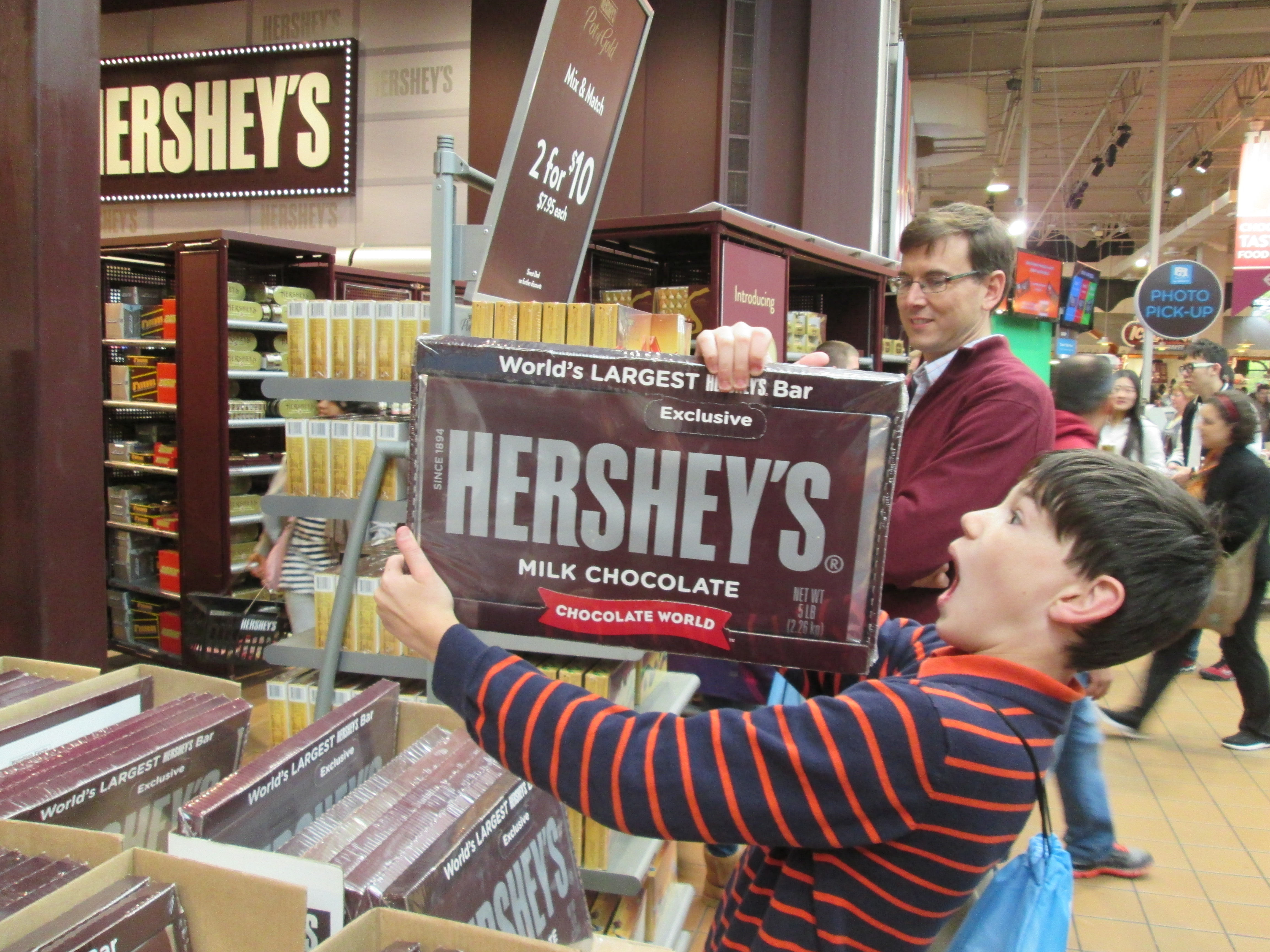 While I’m not giving up on the treat any time soon, she had a point. And being immersed in Hershey land for 27 hours does make you a little jaded and longing for a salad.

One of the draws to Chocolate World is the free tour, which is a ride as well. Try to go earlier in the day, because the lines get longer as the day goes on. The ride is about 10 minutes long and at the end you’ll be singing their happy cow song. It’s catchy!

Here are some fun chocolate facts:

-It takes 270 beans to make one pound of chocolate

-The beans get mixed together because each production region has its own chocolate bean flavor.

-Hershey’s stores 90 million pounds of chocolate beans in its silos.

On the ride, you’ll learn all about how chocolate is made, from sorting the beans, to wrapping the bars. It’s all plastic and shiny stuff you’ll see, but it’s entertaining and we thought it was cute that when going through the roasting area, they actually had heat lamps warming us up, and the smell of chocolate (albeit a fake smell) when the bars were being made.

At the end they take your picture, because doesn’t everyone want a picture of themselves in a ride cart going through a free “faketory” ride? Beware that you’re not allowed to take a picture of your picture. The teen selling photos (who had the worst body odor I’ve smelled in a long time) scolded me for doing so. After that making it through the smelly guy picture area, we got a fun-size Kit Kat bar. We had time to kill and there was no line so we dragged the kids on the ride again.

Chocolate World can be overwhelming, as a huge space with stuff and people everywhere. If you hate crowds, you might hate Chocolate World. They have some unique products, like the 5 pound Hershey bar and the one pound Hershey’s Kiss. And giant Reese’s cups and York peppermint patties (granted, I saw these at Target last December too). But I hadn’t seen macadamia nut Hershey Kisses (which I would have purchased for my mom if they came in dark chocolate) or hazelnut filled Kisses, twice the size of a normal Kiss (uh, saw them at ShopRite a week later). And there was a big selection of white chocolate Kit Kats and Reese’s too.

But a lot of their chocolates are just what you’d find in the grocery store or Costco, but they cost more at the Hershey store. The adorable “fill your bag” with different minis? It’s awesome to get what you want, but it’s $10 a pound, at least double what you’d pay for the bagged variety at this company store.

What I would pay bigger bucks for is to try flavors they don’t have in the U.S., like Kit Kats with these flavors: wasabi, grilled potato, azuki bean, French salt, mango, brandy and orange  or green tea. THAT would sell really well.

They had some fun audcasinos stuff , like getting your picture on a Hershey bar (2 bars for $20) or on a Hershey’s syrup bottle bank (that was tempting).

They also have a food court where you can get regular food, Hershey’s hot chocolate, baked goods and milkshakes. The milkshakes were delicious (but be warned that they’re smaller than in the advertised picture). Look for the photo area in the back by the milkshakes, where you can get your photo with the candy bar mascots at various times (no schedule was posted). The photographer (who happened to be the same smelly teen as on the ride) is happy to take pictures with your camera as well as with theirs. Throughout the store, you’ll find plenty of merchandise, edible and not.

Hersheypark in the Dark with families review

Make your own candy bar experience

Hershey Half Marathon tips for runners and spectators

One Reply to “Hershey Chocolate World with Families Review”