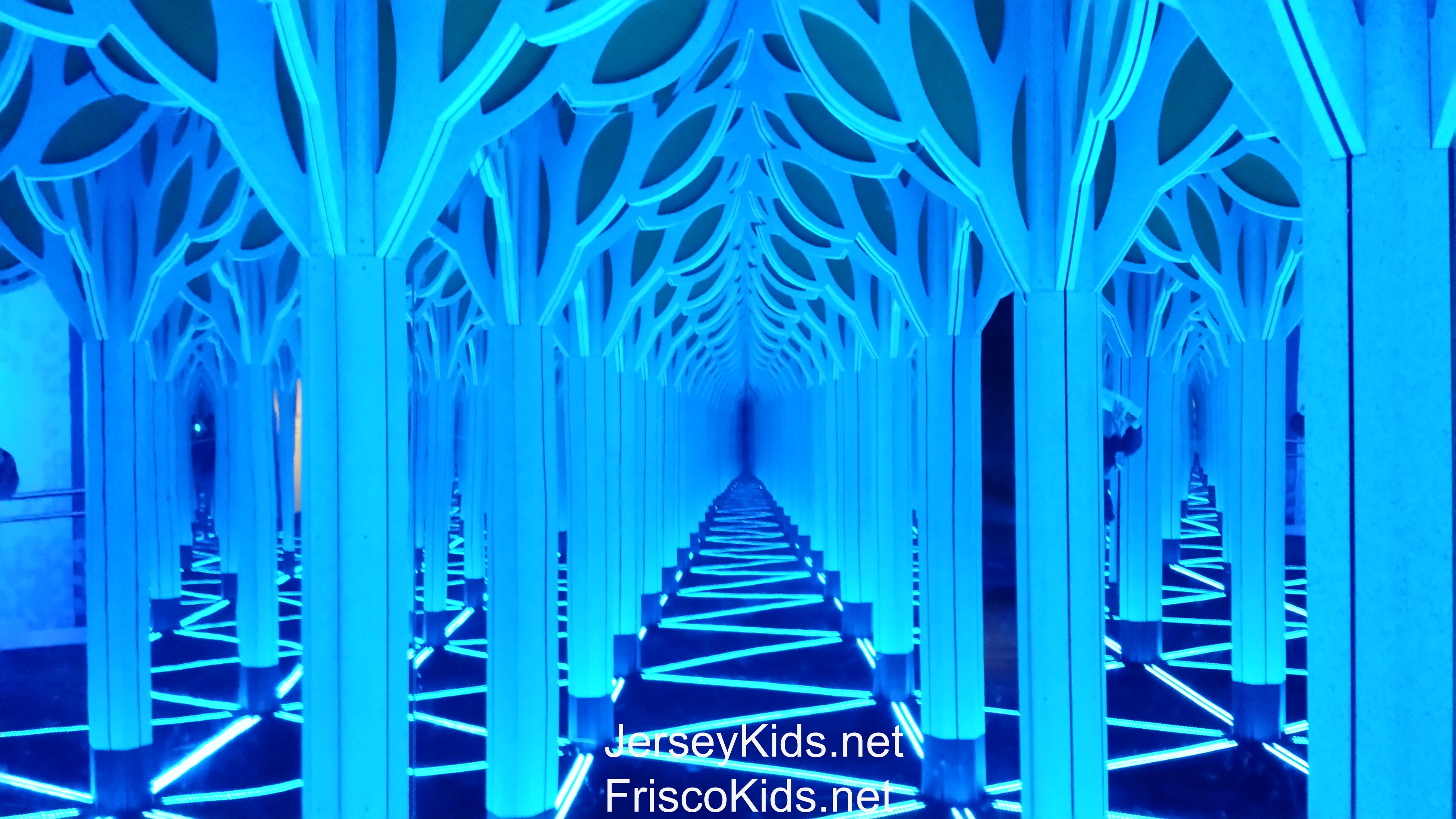 **This is part of our series on Chicago. Also in the series: the Shedd Aquarium, the Willis/Sears Tower, and a review of the downtown Embassy Suites**

We flew into Chicago early morning, and took a taxi straight to the Museum of Science and Industry (as for luggage – we sent that ahead with my husband who had other plans for the day). We planned to spend the day there but I didn’t realize we would spend the ENTIRE day there. So much to see and do. And we still missed out on some of the exhibits. My kids are tween/teen age, and they loved it as much as I did. Plenty for the younger set too.

Some planes “flew” over the miniature set with trains below. 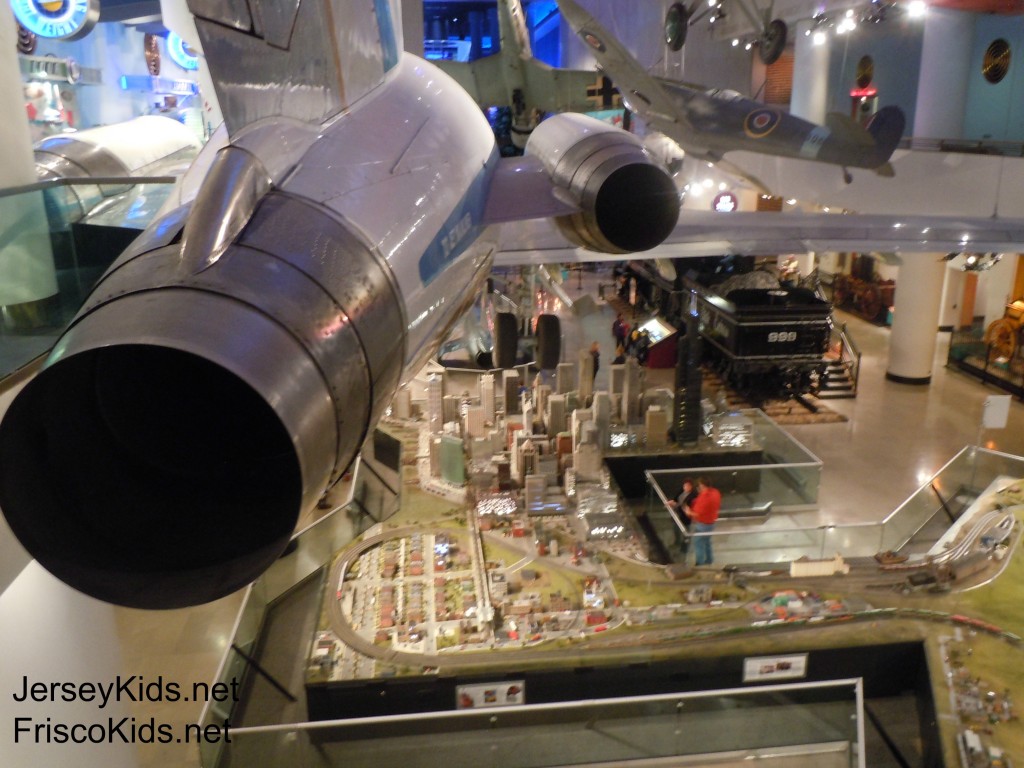 Given that United is based in Chicago, it’s not surprising that it had a big presence in the aviation area of the museum. We even got a plane tour from a retired United captain. I found it fascinating though the kids were ready to move on and found it boring. We learned that when animals are aboard the plane (not just dogs and cats, but zoo animals too – along with the mail), that they ride below the human seating area. And we learned that the same air we’re breathing is circulated below into that area three minutes later. This prompted my daughter to say, “So if you fart, your animal gets to smell it three minutes later.” Yeah. That.

One thing I liked (see photo below) is that they made a window on the floor for you to see how the wheels go down when landing the plane. The operate it from inside the plane so you can see, and again from outside.

We saw the area in the back of the plane that contains the black box, which in reality is orange. The color helps them find it (“Orange is the new black?” said my son). In the cockpit we saw that the captain sits on the left (facing the windshield), the cocaptain on the right, the engineer further back (controlling the mechanical parts). The flight engineer is a pilot too.

We learned that United was the first airline (you can read the history/claims here), and you can see a plane hanging from the ceiling that’s an original United plane used to carry passengers. Their first route was San Francisco/Chicago – onto New York. The plane, which mostly carried mail, could take 2 passengers, and charged $400 a ticket. 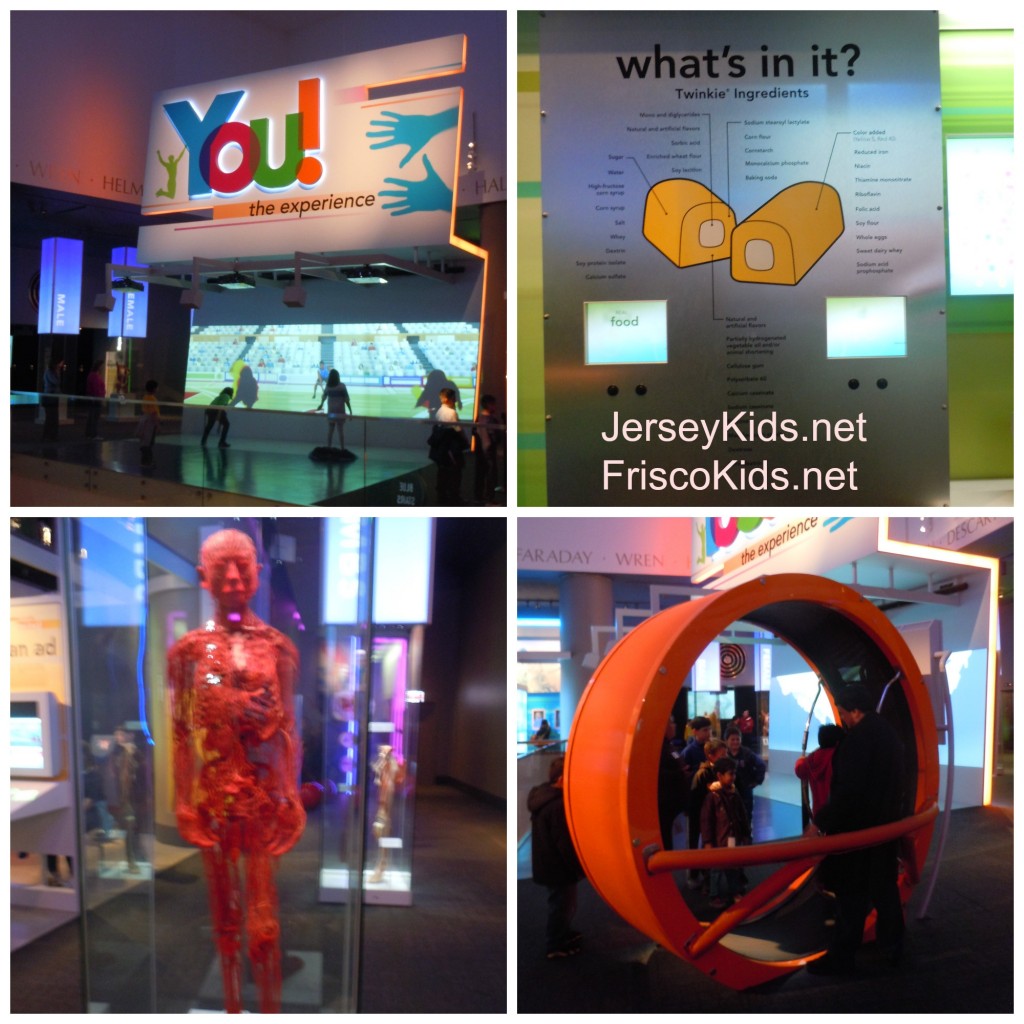 We spent a lot of time in the You! area, as there were a lot of hands-on activities, some of which you can see in the photo above. They had a relaxation game we’ve seen at other museums, where two people compete to see who is more relaxed, with the ball between them moving further for the relaxed person. There were sections on sleep, laughter, eating, how the body works, emotion, expression, eye tracking and other Body Works pieces which show the skin, bones, muscles etc. There’s a separate area with Body Works fetuses in various stages of development. That may freak some kids out. My son skipped it.

We found the Twinkie exhibit fascination, with its trivia. We learned that Twinkies have ferrous sulfate in it, also found in weed killer, and calcium sulfate, found in sheet rock. It uses soy lecithin, found in make-up. And thiamine mononitrate, made from coal tar. And one more – cellulose gum, used in rocket fuel.

The Science Storms section was a lot of fun. You can see from the photos above, there’s a sand flow apparatus where sand flows like liquid. Forces like gravity act on the sand (as well as friction) to create patterns. Not pictured is a projectile motion thing, which tosses a ball across the hall to the other side (there’s a net below). You can play with angle and speed to see what happens. There’s a wind tunnel machine, and some other large science experiments that are fun. 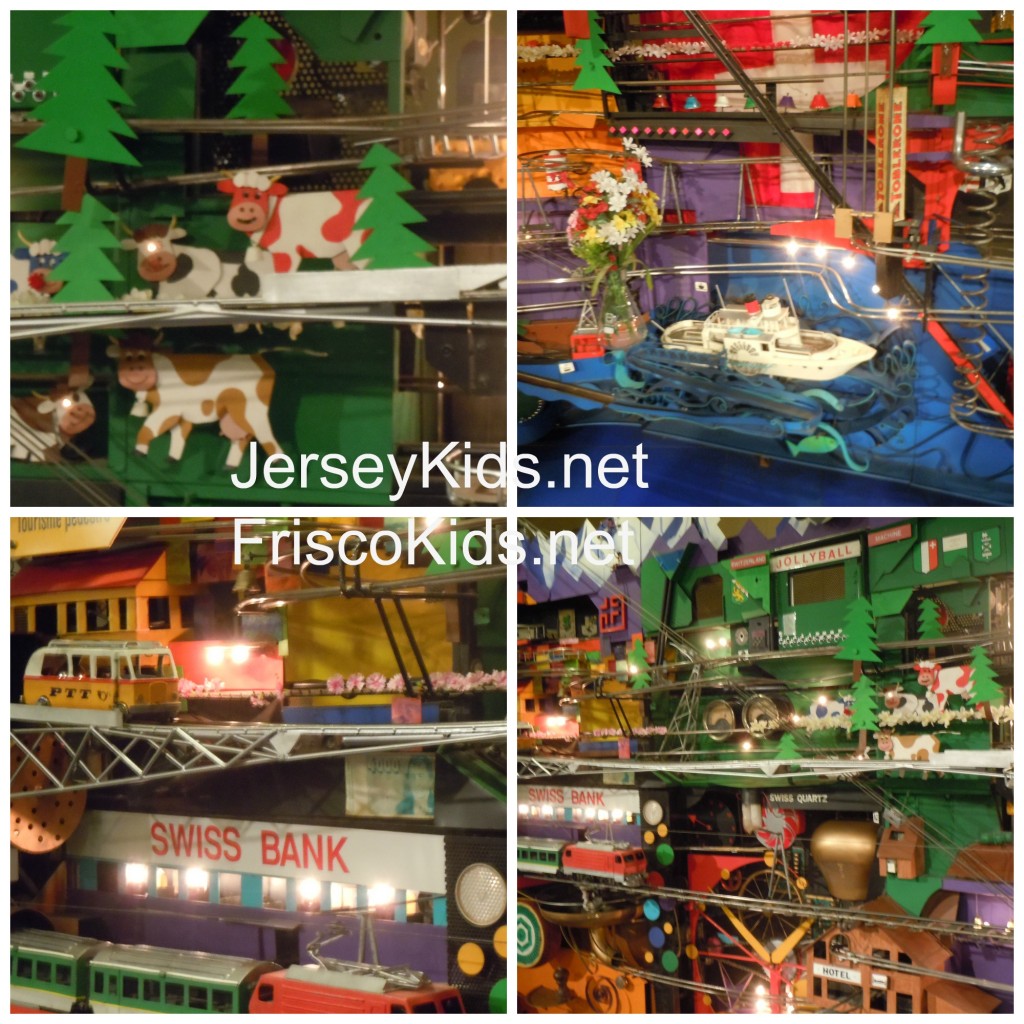 We spent a lot of time watching the Swiss Jolly Ball, that they say is a giant pinball machine. There’s no controls to press and the ball takes its own route, but it was fun to watch and we stayed there through several courses. It’s outside the cafe. 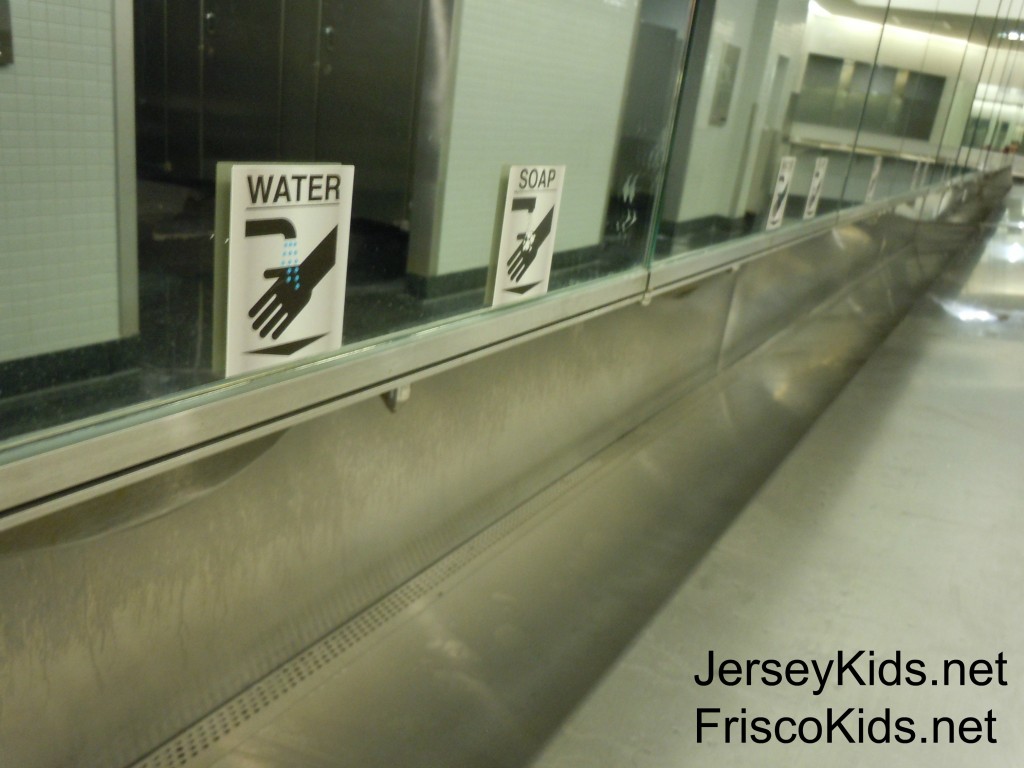 For some reason, we really liked the bathroom sinks on that lower level too. It was like a trough, and a bit of a mystery at first  to figure out where to put your hands!

You are in the midwest, so it’s only appropriate that they have a farm science exhibit. We learned about milking cows (the rotating milking machine that turns the cows on a lazy Susan), manure amounts produced, how the farm equipment works, and all about the uses of soy beans. Turns out there are 600 kernals on every corn cob. The John Deere combine, seen in the lower right corner, cost $240,000 in 2000 and is only used for three weeks a year for harvesting. Farming is expensive! 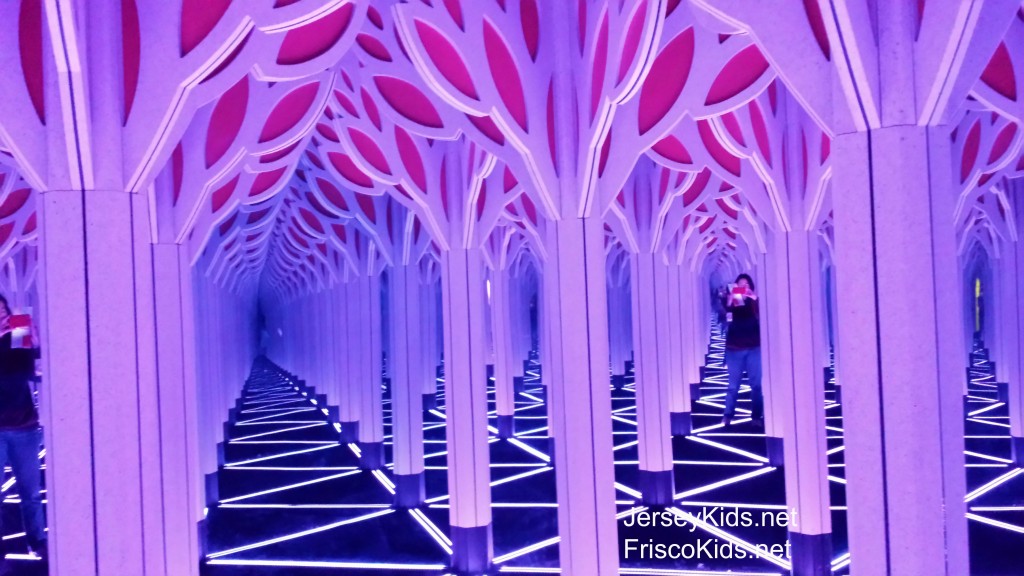 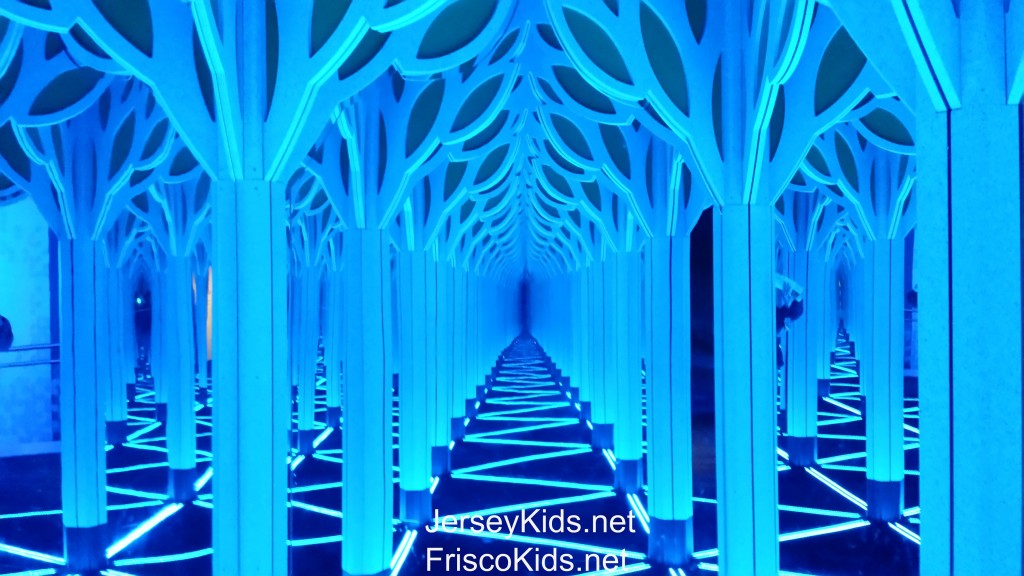 We loved the mirror maze, which you need time tickets for. My kids figured out how to go through much faster than I did, and they enjoyed racing me (and winning). There are some tricks about what you look for in the mirrors to help you determine which way to go. My kids are smart. It’s a fun place to take pictures too, since the maze changes colors and has interesting columns!

As someone who had a dollhouse growing up (one with miniatures, not toys), I would have liked spending more time at Colleen Moore’s Fairy Castle. It was built for a silent movie star in 1935 and came to the museum in 1949. Objects include a painting by Walt Disney, the smallest bible ever written (from 1840), ancient statues that are 3,000 years old, a chair encrusted with diamonds and emeralds, a Royal Dalton set of dishes (one of two sets using the queen’s insignia – the queen has the other set), running water in one bathroom, gold plates/knives/forks in the dining room which has petit point of the Knights at the Round Table, and a tiny pistol that can shoot.

The castle cost $500,000 to build in 1935, with 100 people working on it. The rooms are all modular units that can be taken apart, helpful when you need to move or restore it! It was sent on tour at one point to raise money for children’s charities. They have customized containers for each section. 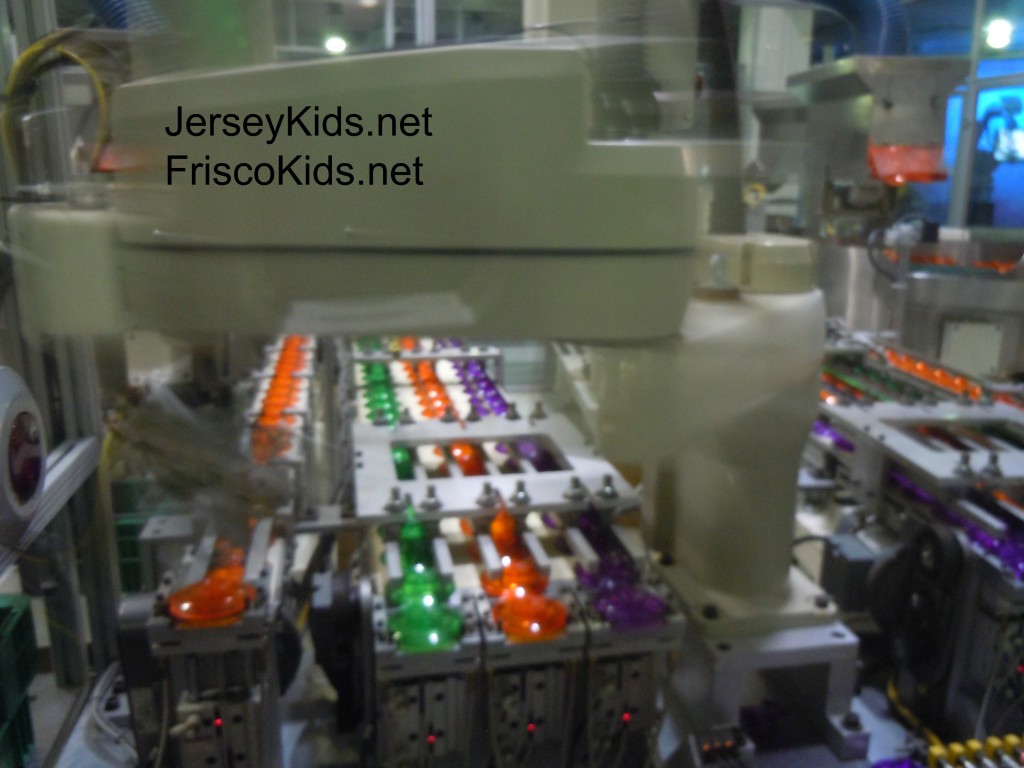 We had a great time watching the small factory that produces spinning tops. You can order one from the machine there, and watch it get made – the whole area is glassed off for observation. 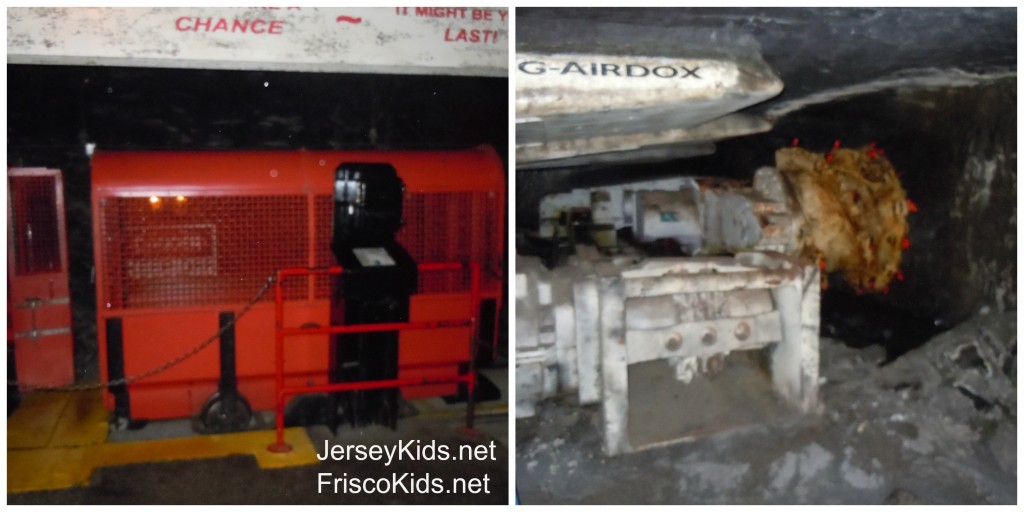 We signed up for the last coal mine tour of the day and were the only participants, so we had a private tour. It was quite interesting and the kids loved it. We descended a coal elevator (after walking up several flights of stairs). The original elevator would descend for 45-60 minutes into a 600 foot mine – in darkness. Coal miners held onto chains hanging from the ceiling. This is where the term “get shafted” comes from.

We learned about how they got paid (per ton of coal removed, and in company script), the dangers to miners, mine fires, the purpose of the canary in the coal mine, how many men lost their hearing in the mines, how mining machines were assembled in the mine itself, how trees make coal, how 40% of US energy comes from coal and how many products have coal contributions, like artificial sweeteners, 6 coal byproducts in Twinkies, make-up, water purifiers…It was an eye opening experience. 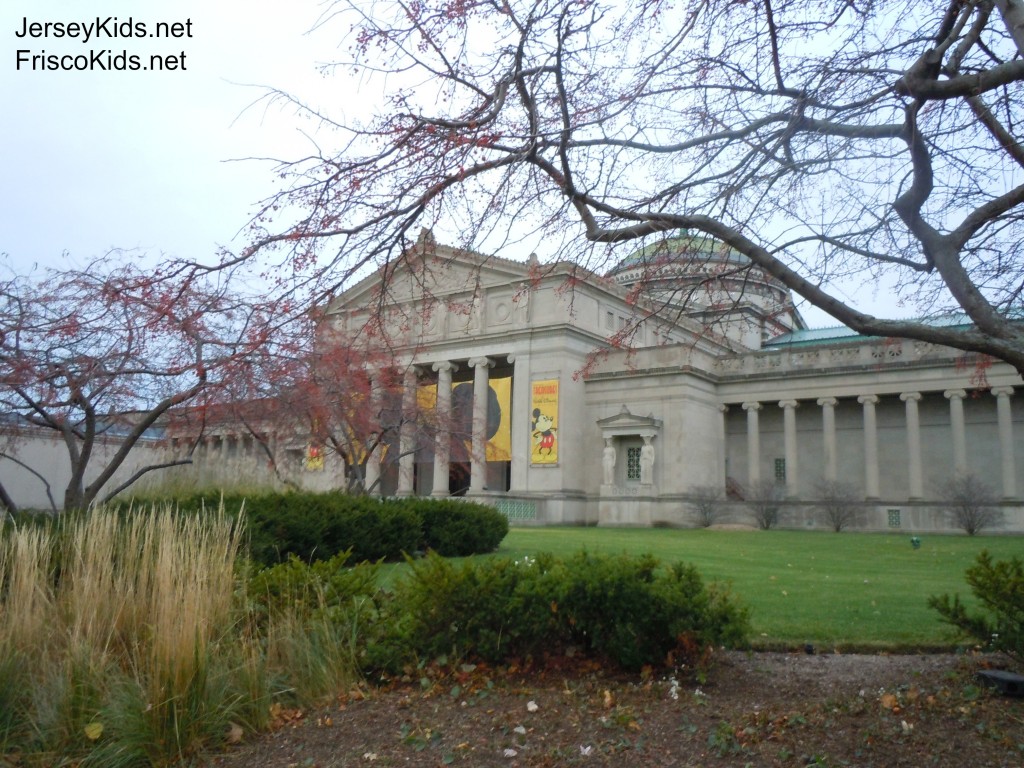 How to plan your trip to the Museum of Science and Industry:

Tickets: Like at the Shedd Aquarium, there are lots of add-on options for the museum, some you pay for, some you just need free but timed tickets. If it’s your first time there, I’d recommend not getting the paid add-ons unless it’s something you really want to do. We waited to get the coal mine tickets until late in the day, as we were interested in going but also had seen much of the museum. The ticket machine and entrance was across from the mirror maze, so that was convenient.

If there are things you want to see that require free timed tickets (like the mirror maze) make sure to get those early on, so they don’t run out on a crowded day.

Basic museum entry is $18/adults, $11/kids 3-11. The top ‘Explorer’ package is $36/adults and includes some of the other experiences like the coal mine tour, submarine tour, movie and others.

You can use a CityPASS at the Museum of Science and Industry. We had 2 CityPASSes for press review, and purchased an additional museum admission. You get one special experience included with this pass – and a simulator ride (which we did first, because the kids were so excited).

Getting there: The museum is very far south in Chicago, but we took the bus back to the Loop where we were staying. The bus was pretty easy to find, though it left us off further from the hotel than we were hoping. Not an issue. They have a parking garage (fee) and you can get a taxi too.

2 Replies to “Chicago: Museum of Science and Industry with Kids”