While I did a more comprehensive review of taking the kids to the Liberty Science Center for a previous post,  I was there recently and wanted to fill you in on some of the changes and new exhibits. The most exciting is the new Infinity Climber, which finished installation a few weeks ago. This “multi-story play space” is suspended 35 feet above the ground. It has 64 petal platforms (they look like lily pads), to climb on, taking you higher and lower. It’s surrounded by a net, which is stiff enough to keep you in, but not so stiff that it hurts. 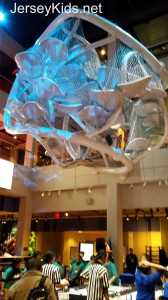 The Infinity Climber is the world’s first suspended climbing space of its kind, and can fit 50 adults and children in there at one time. You have to be 42 inches or higher to go in. It’s great for groups to go in together. 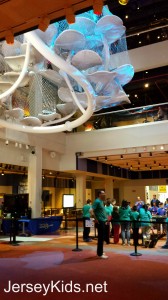 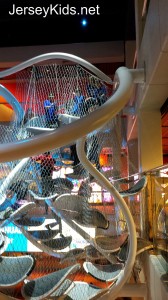 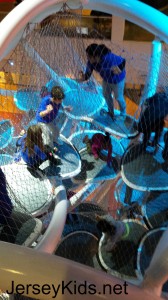 The Beyond Rubik’s Cube exhibit has 7,000 square feet of space all about the Rubik’s Cube. Here, you’ll see some drawings and prototypes for the original cube, and see some of the early prototypes. There are work stations where you can invent your own 3D puzzle, and play with others. 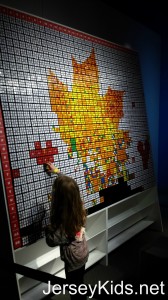 For younger kids, there’s a large color matching cube to play with. Our favorites:

-the mural above, made with Rubik’s Cubes. You can change the mural!

-Below, there’s a robot that will solve the Rubik’s Cube. You can see a short video of it on my Instagram page. 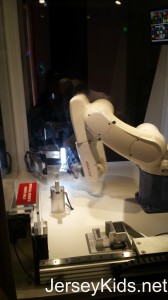 We also really like the giant Rubik’s Cube that you can move  by moving the smaller one in front of it. It’s 10 feet tall and weighs 2,367 pounds. 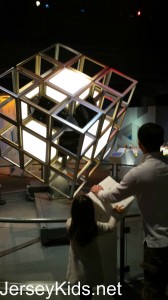 The other new exhibit is the Guitar exhibit. It’s closing January 5, 2015, so if you’re interested, head over soon! While you’ll see a lot of guitars in cases – the rare instrument exhibit – (not so interesting to someone like me, though it looked pretty), there’s also some interactive elements. 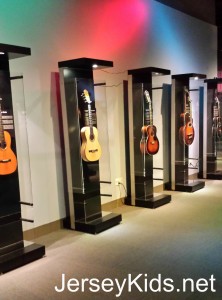 In the hands-on gallery, you can:

The kids I was there with had fun playing different instruments (including guitars) on a stage set up for just that. 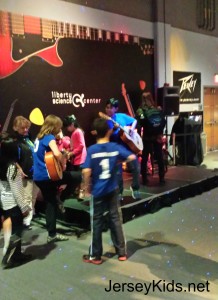 You can also see a guitar design studio, and the types of instruments you might need. Not pictured is a section that has a guitar laid out in pieces, so you can what one looks like when taken apart. 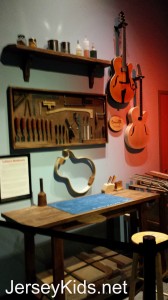