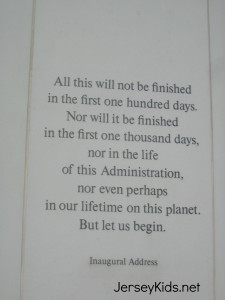 Today is the 50th anniversary of John F. Kennedy’s assassination. I thought I’d commemorate the date with a look at his legacy, or at least his library. I visited the JFK Presidential Library and Museum last summer on my Boston trip. 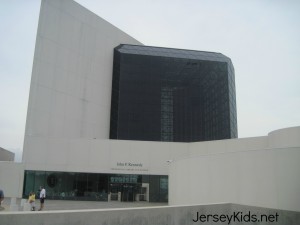 The library opened in 1979, in Boston’s Dorchester neighborhood. If it’s not on the University of Massachusetts Boston campus, it’s in the same area, and the bus takes you through the campus to get there. Originally it was supposed to be on the Harvard campus, but for a variety of reasons (including Cambridge residents not wanting in there!) they changed the location. The library was in planning from when JFK was president. At that time there were only 4 other presidential libraries.

The area had been used as a landfill for appliances, and they needed to add 15 feet of top soil and dirt because of all the garbage. More than 30 million people contributed funds to build it. The location is beautiful, with a view of Boston. You can see Kennedy’s personal sailboat Victura, which is on display May through October. 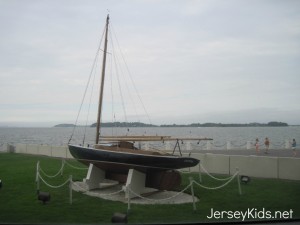 You start off inside watching a 17 minute video about his life and presidency (it was good). After exiting the movie, a docent was giving tours, which I listened to part of the time (it was very crowded). The floor plan takes you through the 1960 campaign trail, and you can watch part of the Kennedy- Nixon debate (below), seeing some of the original cameras and the sound mixing console used in the debate. This was the first live presidential debates. You probably have heard about how Nixon came off poorly, with no make-up and sweating on camera. The museum goes into depth analyzing how the debates went down, how Nixon was sick at the time and refused any assistance and didn’t really prepare. Obviously that was a hard lesson to learn, and you know the debate outcome. 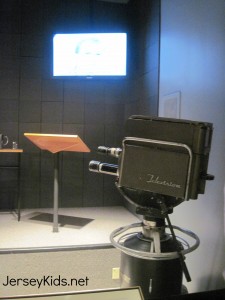 Kennedy was elected by less than a majority of voters – 49.7% of the popular vote. Nixon got 49.5%. But the electoral college vote was 303 to 219. The explanation of the voting system was a good one, especially for those visitors from other countries. In a big display, you can see which states voted for which candidates, and watch election coverage on TV monitors. There was also some campaign advertisements on display. 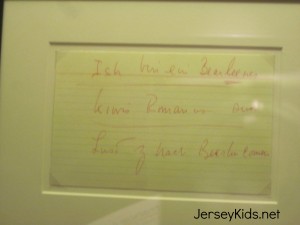 The exhibits walk you through parts of JFK’s administration and what he dealt with in office. As you can see in the picture above, mementos, like the actual card used in Berlin Germany, when JFK said in German “I am a citizen of Berlin…” The notes have his phonetic pronunciation.

JFK won an Emmy (on display) for participating in the election debate, and he was a darling of the press for his televised press conferences, which he held often. You can see some of them on television in the museum, with him joking around with members of the press. 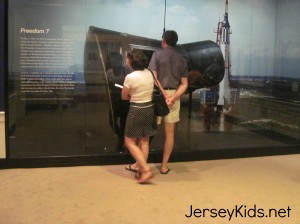 The museum looks at the space race and JFK’s prime role in it. Here you see the Mercury Freedom 7 capsule Alan Shepard Jr. went to space in, in 1961. Shepard was the first American in space. If you want to read more about the Mercury astronauts and their personal lives, I highly recommend the book, The Astronaut Wives Club. 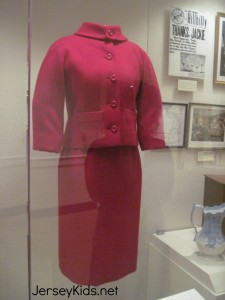 Not pictured, there’s an exhibit section on the Cuban Missile Crisis, and you can see some engraved calendar paper weights that JFK made for his wife and staff, to commemorate the end of that. In the White House corridor, which you walk through on the way to some of the exhibits, you’ll see gifts heads of state gave to the Kennedys. A section on Jackie Kennedy talks about her role in the presidential life, and you can see two of her outfits, as well as some video about her, and featuring her. The museum has recreations of the Oval Office as well as brother Robert Kennedy’s attorney general office. They talk about his role in the government, the controversy about a president hiring his brother, and his relationship with JFK. 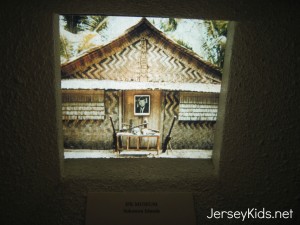 Toward the end of the museum section, you see snippets of the news of JFK’s assassination, and a room is dedicated to showing international memorials to JFK, like the one above. 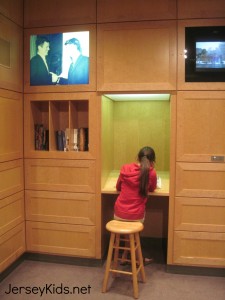 There’s a small, public library that’s kid-friendly. You can look through some of his books and public papers, and there are some computers as well. 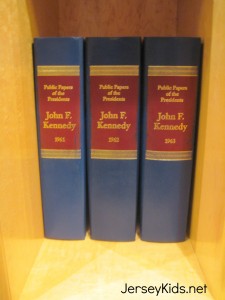 They have a section of the Berlin Wall in the library as well. 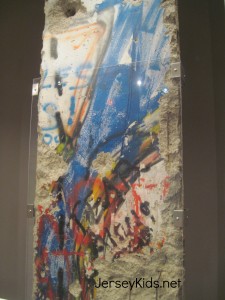 The library was designed by I.M. Pei, whose work you will see all over Boston. He was not well known at the time. The high glass area in the pavilion is striking, as is the staircase, that leads up to the library (not for the public). 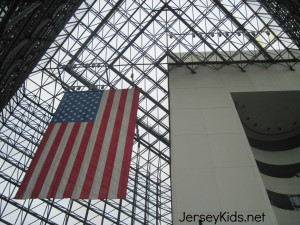 The picture below is looking up into the non-accessible part of the library, and the ceiling. 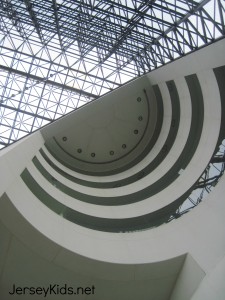 Getting there: take the red line to the JFK/UMass stop. From there, there’s a free connecting bus that takes you directly to the museum. Signs are well marked at the subway stop.

Good for Kids?: If your kids like learning about history, this is a good museum for them. I happened to be in Boston without mine, so I actually had time to read, listen and pay attention to a lot more than I’d be able to if I was with my kids. The museum is not geared to kids, but there are a lot of videos so it won’t be the boring museum experience it could be. That said, if I was with my kids, we’d have to leave a lot sooner.

Cost: I’ll add in details soon – the JFK Library and Museum website is having issues today (perhaps because of the anniversary). I recall that entrance was about $12 for an adult.

Other: They have a gift shop with some nice things, as well as a cafe.