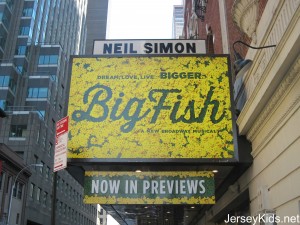 When my parents were coming in town, we wanted to find a Broadway show that they would like (my parents don’t always like the same theater), along with my 10 and 12 year old  kids. It was a tough thing to find something that would appeal to everyone. Fortunately for us, Big Fish the musical was beginning its previews, and we went to its second show not knowing virtually anything about it aside from the synopsis we read online (we hadn’t seen the Tim Burton movie).  The show officially opens October 5. 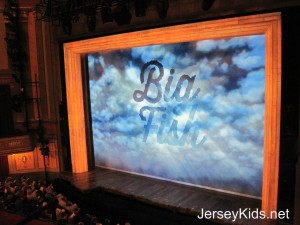 The plot: The Broadway musical stars Norbert Leo Butz as Edward Bloom (who I last saw in Catch Me if You Can), a father whose big stories border on fantasy and frustrate his son, a realist who wants to understand who his father is. Bobby Steggert stars as his adult son Will Bloom, and Kate Baldwin stars as Edward’s wife Sandra. The show focuses on Edward, and bounces back and forth between his aging self (dying of cancer), and his life leading up to it. He was a big-man-on-campus (or rather a big fish in a small pond – to go with the Big Fish title) growing up in small town Alabama. Everything he did was grand, though not always successful. He made a life for himself, befriending giants, hunting witches, working for the circus, luring fish from the rivers, and living larger than life.

It was a plot we could all understand, with the father/son conflict, a love story and the race against time.

The music: Music and lyrics are by Andrew Lippa, who we just heard all about on our summer vacation, when we listened to Kristin Chenoweth’s book on CD, A Little Bit Wicked (a fun listen – the kids loved it). Lippa’s music was catchy and enjoyable – my favorite song was “Be the Hero” – about being the hero of your life. It was a great message for the kids.

The staging: The Big Fish staging was a delight. I wondered where the orchestra was, when seeing the front of the stage, which had waves coming out of it (it was clever). Add the mermaid who appeared there periodically, and fish jumping out of the water, and I wasn’t sure where they were. Turns out they’re on stage, behind a screen, stacked on three floors. There’s a reveal at two points, and it’s impressive. There were several set/staging moments that delighted the audience (and my kids especially), like Bloom getting shot out of a cannon, the wide field of daffodils on stage (not a shocker – just look at the show logo in the picture above), the witch costumes/choreography, and the elephant dance. My dad especially loved the dancing, which reminded him of the dancing from his youth.

Is Big Fish appropriate for kids? In a word, yes. There were no squirmy moments for me as a parent, worrying about a sex scene or language that would make me cringe. The show was chaste and I can’t even recall if there were any bad words (probably a few – nothing stands out). My kids (ages 10 and 12) understood the bulk of the play, and many parts made them laugh and smile.

Was it good? We really enjoyed the show. Was it the best Broadway show I’ve ever seen? No. But it was solid and I think it’s a good choice for those looking into tickets.

My only criticism is that a few times it was confusing whether we were in a fantasy scene or a real scene, but I guess that was part of the point of it. Edward lived in both worlds. Was the giant real? Was the witch real? How about that mermaid? Even if they weren’t as described by Edward, what did their stories tell us about Edward’s life and what message did they convey? I’m still unclear about some of the story’s messages in Big Fish, and what they added to Edward’s life, aside from his vision of himself.

A slight spoiler for the ending (don’t read this if you want to be surprised). Will learns a secret his father kept from everyone – a secret that makes Will proud of him. While the reason for the secret makes sense, it’s very odd that this real version of him doing something so great, is completely selfless and hidden, unlike his persona. I felt a little cheated (as did Will, I’m sure) that this version of a complex man did not come out during his life.

Will comes around at the very, very end, buying into his father’s stories, providing the reconciliation that makes for a good ending. Just before Edward dies, Will takes his dad to the river (presumably in story-telling mode, though it’s possible he really did wheel him out of the hospital), where he’s met by all the characters from his story. It’s a little pat, a little too clean, and wasn’t satisfying to anyone in our group. Will takes Edward back to his room where he dies peacefully, having confronted everyone of importance in his life, and gaining his son’s understanding. What I did like was the second-to-last scene, the funeral, where Will learns more about the characters from his dad’s life. It was a tear-jerker.

My kids were a little confused about what Big Fish meant. There are several interpretations. The first is the big fish story – the story of the giant one caught, told over and over again, the type that Edward Bloom is always telling. But he was also a big fish in a small pond for his Alabama life.

The movie: I haven’t seen Big Fish on the big screen (or even the small screen) but in reading up on it online, it sounds like the show is similar, albeit with the Broadway show featuring fewer adventures. Screenwriter John August adapted the book for the movie, and again for Broadway. 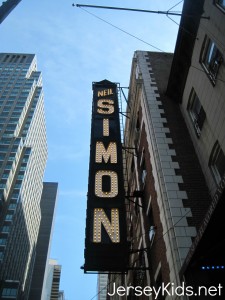 Show time: the show ran about 2.5 hours, including intermission.

An interesting aside, the New York Times ran an article about how director Susan Stroman was heavily involved in fundraising for the show. It provides a peek into Broadway financing now.