We’ve been the New York Aquarium a couple of times now, and we really like it. It’s on the Coney Island boardwalk, so you can go from the aquarium to the beach to the rides with no effort. They have the usual exhibits, like jellyfish, seahorses, sharks, fur seals, sea lions, walruses, sea otters, penguins, turtles, sting rays, a reef and shore area.  They have 4-D movies (extra) and a sea lion show, plus special exhibits.

President Theodore Roosevelt was the person who demonized the piranha, whose sharp teeth are legendary. He wrote about a school of piranhas attacking a bleeding cow while visiting the Amazon. In reality, the tour guide threw the cow in the water to make the trip seem more exciting, and the fish were starving and trapped.

Every six months in the Amazon, a forest the size of Florida floods 40 feet, and the fish go searching for new food.

Tetras, the colorful small fish you find in the pet store, come from the Brazil flood plain – 20 million per year.

We went to the sea lion show, and then paid extra ($20) for a smaller sea lion encounter show with opportunity to get a sea lion kiss. (note – you can go for free with a paying person, and you’ll sit higher up in another area. You can take pictures, but they won’t be as good as the professional photos because you won’t get a good angle). 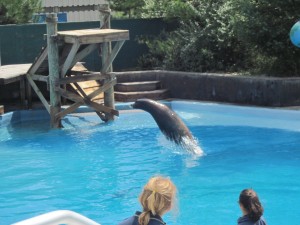 During the shows, we saw Duke and Diego, large (around 450 pound) California sea lions. A little about sea lions: They recognize each other by smelling each other’s breath. Their primary predators are the great white shark. They don’t chew their food, but grasp fish with their teeth. They eat squid for fluid, but don’t actually drink – the water is salty, of course. They also eat fish like herring and capan. They molt once a year. They have five digits on their fin. They have tails but don’t need them – they’re ancestral. They have belly buttons!

In terms of working with the sea lions, they make it educational, which is fun for the animals. They feed them with tricks – making them jump for it, etc.  They take blood samples to test for illnesses, since the sea lion can’t tell them when they’re sick. They do the finning (like a shark) in the water to warm them selves up with the sun.

During the free show, you’ll see lots of sea lion tricks, where they dance around on their fins, leap in the air, and dive off a platform. They’re very cute. If you sit in the front row, you can get close to them when they make their way out of the area. You’ll notice some boxes by the fence – stay there and you may get a surprise.

During the sea lion encounter, they also do some tricks, and you can choose to get a kiss (see below) or just pose next to them. The $20 extra was worth it – and the money goes to support the nonprofit aquarium and its mission of helping animals.

My favorite was the walrus area. They have two big walruses and I liked seeing them swim from the glassed in area below. They made dramatic swoops towards the window and they’re such massive creatures, yet graceful. 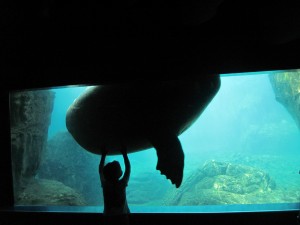 Walruses, like the one above, can dive down 200 feet to look for food. Adults eat 85 pounds of food a day. They can squirt water from their mouths to blast shellfish from the mud at the bottom of the ocean. Males have inflatable air sacs in their necks, which they use to stay afloat when sleeping in the water. They can eat 200 pounds of clams a day (granted, most of the weight there is probably shells). You can stay for a walrus feeding, where they’ll explain more about the walrus (and they do a few tricks as well!).

Wildlife Conservation Society’s New York Aquarium opens every day of the year at 10 am, and closing times vary seasonally.

Cost: $14.95 for adults, $10.95 for children ages 3-12 and $11.95 for senior citizens (65 and older); children under 3 years of age are admitted free.Fridays after 3pm, admission is by suggested donation. If you join the Wildlife Conservation Society, you’ll get in free to any of their facilities including the Bronx Zoo, Central Park Zoo, Prospect Park Zoo and Queens Zoo.

Where: Surf Avenue at West 8th Street in Coney Island. They have a parking lot, and it’s easily accessible via subway (F or Q train to West 8th Street Station in Brooklyn)