In its day (1832-1935), the Lower East Side (LES) was the largest Jewish community in North America. The Lower East Side is defined as from the East River to South Street Seaport, from Broadway to Lafayette to 14th Street. This was in an era where there was no Tribeca, no SOHO. The LES has always been an immigrant neighborhood, and is also associated with the Irish, Chinese, Poles, Ukranians, and many others.

The Tenement Museum is a unique place where you’ll learn about the lives of actual families who lived (and sometimes worked) here. I’ve been to the Tenement Museum twice, once with and once without my kids, who are 8 and 10. I’ll share a lot of information here, and give you the thumbs up or down for the kids at the end. And if you disagree with any of the history I mentioned, feel free to leave a comment. The information came from my tour guide.

In 1988, Ruth Abram and Anita Jacobsen wanted to create a testament to immigration. They couldn’t find a worthwhile place, while looking for something that had deteriorated naturally and hadn’t turned into a crack house. The finally found this, where they also found 9,000 artifacts from some of the 7,000 people (from 20 countries) who lived here over 100 years. They later bought the buildings next to the museum and are converting those now as well. Read more about this history here. This is the first tenement to be individually listed on the National Register of Historic Places. 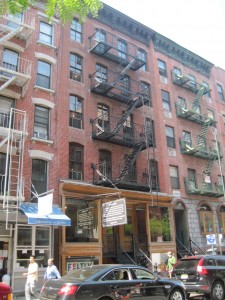 WHAT IS A TENEMENT?

The Latin word for tenement is tenere, to keep or to hold. Any building inhabited by 3 or more unrelated families is a tenement.

The Orchard Street area was heavily German, called Klein Deutchland (little Germany). Part was heavily Irish, with the Irish fleeing from economic problems. In the 1860s, one quarter of the Irish lived here. The Chinese community is the only one that had large presence then, and still does today.

Later, the Germans moved to Yorkville, in the 70-90th Avenues, gradually replaced by Eastern European Jews and Slavic people. The Irish assimilated and moved to the East Side, Hell’s Kitchen and the Bronx. The Italians took their place, forming Little Italy. The lower east side is now home to immigrants from Asia, Latin American and Dominican Republic.

The tenement building now open for tours was built by Louis Glockner, who tore down a church to build English townhouses. He later divided them to make spaces to rent. Then he tore that down and replaced it with tenements in 1863. Tenements are usually 4-5 story buildings, with borders at the top, maybe an arch under the window, an Italianate border. They usually have a stoop outside (stoop is a Dutch word – Dutch used to be the language spoken in the U.S.). The Tenement Museum has eight stairs leading up the door, and is five stories high with four apartments on each floor. There are also four stores on first level, one of which was a bar in the day.

At that time, the Lower East Side housed 1,000 people per acre, one of the most densely populated area in the world. The tenements arethe ancestral home of 25% of all Americans.

We enter the tenement building. There are no lights in the hall. It’s almost pitch black. Back then, five to 11 people lived in each apartment, which consisted of a living room, a kitchen and one small bedroom, 325 square feet for the whole family. Women wore big full skirts, and used a lamp or candle until electricity was installed. They got their water from the well outside. They’d bring water up to the apartment to wash their clothes, or do it outside. The privy (bathroom) was outside too, until later when plumbing was installed. There were three to four outhouses, which were shared with the bar patrons.

In 1901 the tenement law stated that every apartment needed cold running water and ventilation. They added one hallway toilet inside per two families. These were railroad flats, with one room leading to another. They had to install one or two interior windows for ventilation at this time because it was so stifling. New York was the first to enact building codes mandating a fire escape above the first floor. The most expensive apartment faced the street, with the fire escape providing air. They had coin operated electricity machines, for a quarter.

In 1924, electricity was installed in LES, 10 years after the rest of the city.

The building was closed in 1935 because it was going to be too expensive to do additional required code upgrades (changing the banisters to metal). At that time, seven of the 20 apartments were occupied, so the owner couldn’t afford it. The residents were kicked out and the building was closed, except for Mrs. Rogarshevsky (one of the women featured in a tour) who stayed on as a janitor in an otherwise empty building.

The Lower East Side was home to the U.S. garment industry. During the Civil War, all uniforms for both sides were made here. You’ll learn about the garment industry during your tour. Before the sweatshops opened up, many of the apartments were their own stitching shops, with several employees working in the living area, with kids underfoot. There might be an errand boy who brought the cloth to the shop, a young girl who sewed on the finishing pieces, a presser (typically an older man – paid $12/week), and someone who did other sewing. The owner was paid 75 cents a piece for the work, and from this paid rent, labor and material costs. This block of Orchard Street had 23 tenement sweat shops.

In 1901-1911, 800 loft-style factories were built, and electric sewing machines were invented. The home-based sweat shops were out of business, and the tenements were then just homes.

When you take a tour of the Tenement Museum, you learn about a few families who lived in the building at one time. The museum staff has researched and even interviewed some of the surviving family members, using census records, recorded interviews and other research. They also found 9,000 artifacts, which help tell the story. One apartment had at least 20 layers of wallpaper and paint onteh walls.

Here’s a bit about two families who lived there:

On one tour we learned about the Gumperts (Natalie and Julius), who were Germans living there in 1870. The Gumperts were a shoemaker and homemaker. They had three  girls and a boy. In 1873 was the Great Panic, a depression where 25,000 people lost jobs. You had to be “worthy poor” to get aid (meaning you were so disabled you had to crawl). Roosevelt Island was then called Welfare Island. They had poor houses which were kept in terrible shape to discourage people from wanting to live there. Kids who were two or older were put into orphanages rather than Welfare Island. During this time, Julius Gumpert disappeared, and no one knows what happened to him. She had to figure out how to raise the kids on her own.

In 1882, Julius’ father died, leaving him $600. Natalie got a death certificate and was able to inherit the money. She moved uptown to 3rd Avenue and 14th Street with the German Jews. Even though a small portion of the Germans were Jews, they all saw themselves as one ethnic community. The German Jews started the Emmanuel Synagogue at 66th Street and 5th Avenue, now the largest synagogue in world.

In 1922, Rodolfo and Rosario Baldizzi, an Italian couple, moved in. They were “without papers” or “without passports” aka “wops.” Rodolfo was a cabinet maker, with that profession being considered artists. They used no glue or nails, but carved. In 1929, the depression hit, and Rodolfo did odd jobs to make money. Rosario worked in sweatshop and was paid in “mils” – 1/10 cents per sleeve or collar. She got a ticket for each item and swapped her tickets for cash later.

The Levin family lived there in 1893-1904. They lived and worked in the shop, with Mr. Levin employing 3-5 workers in the home  daily. The Levins had 5 kids there as well.

Also called Rogarshevsky, Abraham and Fanny lived in the tenement with six kids. They had four incomes in the house, and could afford nicer things. Kids as young as 14 could work at a factory. Abraham died of TB in 1918, and Fanny was hired as the building’s janitor. Even though  the building was closed in 1935, she stayed on until 1941 as the janitor.

Even being in these apartments, it’s hard to imagine living there with a whole family, without air conditioning, a private bathroom or space. 325 square feet was fine when I was living alone, but with kids? And many of the families also worked from home, with babies and kids in tow. Since the only bedroom was so small, it could only fit one bed. The kids or unlucky parents, would curl up on the floor, couch, or in the case of one family – heads on the couch, bodies on an ottoman, to sleep each night. Some would venture to the roof to sleep on hot nights. Like in the days when the tenements were occupied, there is no air conditioning in the building (there are sometimes electric fans). If it’s a really hot day, it will be really hot inside.

My kids were 8 and 10 when we went, and both were bored silly during the tour. It didn’t help that it was hot outside (and inside). Some more mature kids would appreciate the tour, though I think mine were too young. To prepare for the trip, it’s helpful to read some books, like the All of a Kind Family books.  They tell the story of growing up on the Lower East Side. I tried to get my daughter to read them but she refused. This would be a good tour to do if you also go to Ellis Island, as they share many similarities.

Who: officially kids 8+ and adults

TicketsReservations: Highly recommended. The tours aren’t large, and I’ve heard several stories (from family members) who were turned away because tours were full when they showed up. I went by to get on a Thursday in late April, and most tours were already full when I arrived. Do yourself a favor and reserve in advance.

Where:  The Tenement Museum is at 97 Orchard Street, though the museum store and ticket office is actually across the street at 108 Orchard. You’ll go there first. The store has a lot of great books and souvenirs, so you’ll want to spend some time there. They also have a short movie you can watch (and 2 bathrooms).

Food: Right next to the actual Tenement Museum is a tiny window where you can order Il Laboratorio gelato (95 Orchard Street), they just reopened after renovation. I got some during my first visit, but not the recent one. There’s a larger Il Laboratorio a few blocks away on Ludlow and Houston. Yummy! Across the street from the actual tenement is Vie de France, a crepe and sandwich restaurant. If you go on a Saturday, head to the Hester Street Market where you’ll find some food vendors and fun craft items.