When I saw the King Tut exhibit in San Francisco last year, I left the kids behind, not sure if they’d make it through without getting bored.  While I enjoyed going alone, I did feel the kids were missing out on a huge piece of history  – an experience not usually readily available in museums.

When the exhibit arrived in New York City’s Times Square Discovery Exhibition space, I knew I had to take them. Now they had 3-D movie as well!

The big deal about King Tut is not that he was Egypt’s greatest king. He wasn’t, though he did have some interesting challenges. By the time Tut’s tomb was discovered, it was the only tomb that was almost completely intact on discovery. It gave researchers an understanding of the burial process.

Tut’s tomb had been victim of two grave robberies – both soon after the burial. And this explains the ransacked condition of the storage rooms on discovery by Howard Carter (you’ll see photos of those rooms in the exhibit). In spite of the vast amounts of gold and jewelry, the robbers had very little room to get in and out, so they could only steal the smallest items like jewelry , costly unguents (leaving the containers behind), and small gold statuettes.  It’s amazing to see what they left behind.

By the time Howard Carter found the tomb in 1922, he was about to give up. His benefactor, Lord Carnarvon, reluctantly agreed to one last search season. Carter knew which tomb he was looking for, since the others had all been uncovered. Carter made the discovery within days of starting that season.

The first part focuses on Tut’s ancestors, which fills in some of the history and also gives examples of funerary items that you won’t see from Tut’s tomb. The second part is all Tut. As a bonus (and something I didn’t see at the San Francisco exhibit) was a replica of Tut’s mummy and videos about DNA testing of King Tut and the other kings.

Just before entering the exhibit, you see a brief film and then the doors open to reveal a statue of the Boy King. This dramatic beginning was impressive, especially to my 7 year old son, who talked about the exciting entrance as one of the highlights.

The first part of the exhibit focuses on Tut’s relatives, and gives additional background to what you might find in a tomb. They showed a stunning gold coffin of Tjuya, King Tut’s alleged great-grandmother.

Lots of interesting information provided in the exhibit – which I won’t repeat here. You’ll see artifacts in this part of the exhibit like a leather dog collar (pets were both hunters and guardians),  wooden cow’s head (the kids saw this photo in a book before we went – they were excited to see it in person), a model boat to transport the dead in the afterlife, models of fruit (so the dead could eat), hieroglyphs, photos of the Valley of the Kings (great to show the kids where/how the tombs were hidden), a gilded mask and golden coffin of Tjuya  (Tut’s great grandmother).

Before you enter Tut’s area, you can watch black and white movies of the opening of the tomb – complete with explorers dressed in full dress suits. And see a blow-up of the New York Times cover announcing the discovery.

In Tut’s area you’ll see one of four game boards in his tomb, a carved ivory ring box with metal hinges (one of the earliest examples of a box with hinges), a glass mirror case in the shape of an ankh (symbol of life), a chair used by Tut as a child (with lion paw legs, and armrests with inset gold), a golden shrine with scenes from his life, and a glass scarab from a meteorite (along with a great short film explaining how the meteorite fused the glass in the Sahara).

Highlights for the kids (and me): a canopic jar (jar holding mummified internal organ) shaped like a mummy, and made in gold with inlayed jewels. This coffinette held his liver and was one of four such jars in the tomb.

One of the last rooms showed the placement and size of the sarcophaguses and five nested coffins, along with an x-ray view of the mummy and placement of dagger and jewelry found on him. Five of those objects are also in the room, including a cobra headdress, pectorals (large necklaces) and the dagger.

-by the time King Tut was born, the Giza pyramids had been standing more than 1,000 years

-Tut was buried in his advisor’s small tomb, because Tut died so young they didn’t have a proper tomb ready for him

-Mummified bodies and organswere dried with salt, and later covered in resin. It took about 70 days.

-King Tut’s cause of death is still a mystery. A 2005 CT showed he was healthy and not diseased (aside from malaria – possibly a cause of death). He also had a leg fracture thought to have occurred 1-2 days before his death. Given the 130 walking sticks found in his tomb, he was thought to have some walking problems long before his death. That 2005 CT scan disproved theories about being bashed in the skull.

-All royal mummies were removed from the Valley of the Kings in 2008. King Tut was taken from his gold sarcophagus and put in nitrogen-filled climate-controlled case in a tomb. He will never leave Egypt.

-In Tut’s tomb, were two baby coffins – both girls. Both his. One was a stillborn baby, one was 5 months old.

Just when you think you’re done with the exhibit, exiting from the tomb room (and finishing the last of the 22 audio segments), you come to another room with a reproduction of his unwrapped body, and movies about the DNA analysis. This part wasn’t in the San Francisco exhibit and in fact was just published in the February, 2010 Journal of the American Medical Association. It covers a two year study of the genes of 11 royal mummies. There had been a question of Tut’s parents  (who’s your daddy?). It turns out that his father was indeed Akhenaten. Just so you know. The movies show how they extracted the DNA from these bones that were thousands of years old, and the excitement when they finally got it to work.

I would love to have stayed there and watched for much longer, but the rest of my group was ready to go, and the kids were definitely done.

The 3-D Movie – Secrets of the Pharaohs

This 3-D movie was about 15 minutes long (and you’ll find it after the gift shop and café). The kids liked the 3-D effect and watching the people dressed up as Egyptians. I thought the film was informative and interesting. You’ll learn how royal mummies were found and how they were mummified and buried. They talk about how there were 76 mummification ingredients – sacred oils from around the world, like beeswax, pine resin, golden honey (which are also antiseptics). The movie shows actors dressed as Egyptians in their time, which gives a lasting impression – especially for kids who haven’t seen the 10 Commandments.

The best part of the film for me was the history. In 1881, the Rosetta Stone was discovered, providing a way to translate the hieroglyphs. Charles Wilber was one of a few dozen people who could read them. He was searching for hidden tombs, but no mummies were found in them. In the 1800s, Egyptians were trading goods from the mummy tombs. Wilber knew that no mummies had been found, but saw objects in the market that had their names. The sellers couldn’t read the names, but Wilber could, and he bought objects and mummy wrappings. He asked to go to the tombs. In July, 1881 he was shown the Pharoahs’ tomb. Dozens of royal mummies were stacked in there, including Tutmosis 1 and 2, Hatshepsut’s husband, Ramses III, and Seti I (father of Ramses the Great). In the tomb were 40 mummies including 12 pharoahs.

What the kids liked:

Zack liked the dramatic entry with the movie. He also liked the benches, which allowed him to sit down as we went through. He liked that he and his sister didn’t fight inside (we liked that too).

Dori liked the coffin for the organs, Tut’s dagger and jewelry.

They both liked the movie and the gift shop.

The audio tour was difficult for them to understand. Omar Sharif narrates, and he has a strong accent. We spent a few hours in the exhibit – and that was probably too long for them.  The kids didn’t like the exhibit as much as I’d hoped, but they did continue to talk about it once in awhile at random times. Reading books ahead of time really helped.

While we were expecting long lines and crowded galleries, we had no wait and plenty of space. And we went on a summer Sunday morning. Organizers want you to know you might need to wait up to 30 minutes, even with timed tickets. We were also told ahead of time that no backpacks were allowed. We went to check ours and the coat check person didn’t seem to care if we checked them or brought them inside.

At the end of the exhibit, just outside the gift shop, is a café. The gift shop has the usual assortment of expensive stuff, but you can find some inexpensive trinkets as well, including Egyptian temporary tattoos for a quarter. They have some other trinkets around the register for a few dollars, and you can use a machine to get your cartouche on paper for a dollar. The movie is in this area also (along with the restrooms). 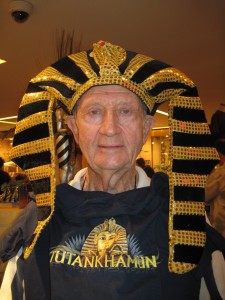 No strollers, food or drinks are allowed. Feed them before you go.

My 7 and 9 year old kids haven’t studied Egypt. Seeing a 3,000 mummy would not have much significance to them. So we did some research before going. We read the books on King Tut’s curse (a great way to get kids interested!). Here are a few to consider:

The Curse of King Tut’s Tomb by Michael Burgen

I highly recommend reading the book Discovering Tut-ankh-Amen’s Tomb, edited by Shirley Glubok and written by Howard Carter. It’s the children’s version of Howard Carter’s diaries. The entries condensed and Americanized and very easy to read (though a bit difficult for my kids). It gave me an excellent understanding of the discovery process and preservation of the artifacts. Have you wondered how they removed the sarcophaguses without breaking them? Did you wonder how long it took to catalogue, photograph and remove the artifacts from the tomb? Did you wonder how they prevented modern grave robbers from descending once the tomb was discovered? Any clue how you protect the items, sealed off below the desert, from new exposure to the air? It’s all explained in the book, and it gave me a new appreciation for the amount of boring, tedious labor involved with this type of archeology. And this from someone who spent three weeks volunteering on an archeology dig in Israel.

Tickets – Discounts: (even for St. Paul) For information on King Tut tickets, discounts and more, click on this Jersey Kids page

4 Replies to “King Tut in NYC – Review with Kids”