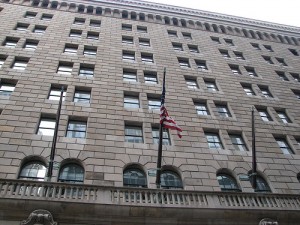 There’s something sexy about descending 50 feet to Manhattan bedrock to see the largest stash of foreign gold in the world. The reality, however is slightly underwhelming.

We started in the numismatic room (yes, that’s the coin room), with cases explaining the history of money. You’ll see lots of coins, including the famed 1933 Double Eagle. I’ll spare you the long (but interesting) story of theft and intrigue). But an anonymous purchaser got it for a cool $7.59 million at auction, and agreed to display it in the case that you’re not allowed to touch or lean on.

(Even if you don’t get into the gold tour, you can still get free access to the numismatic room during business hours).

From there you’ll learn about the Federal Reserve in a video. The New York branch is one of 12 regional reserve banks that act as the U.S. government’s bank. The Federal Reserve sets U.S. monetary policy, stores cash, shreds old bills, and is last resort for banks needing loans.

Unfortunately the New York branch doesn’t store cash on site, so you have to watch the video to see other branches moving money around via robot and putting it in huge stacks in a warehouse. The guide told us that the banks can only store a certain amount of cash in their own branch, and the rest goes to the Fed for storage. The Fed sorts through something like tens of millions of bills daily (they confiscated my notebook (see below), so I don’t have the exact number), and finds maybe 30-40 fraudulent bills in that stack. Those, of course, are shredded, and the banks get docked for them. I thought that number was surprisingly low.

We moved into the elevators to descend the 50 feet below sea level (80 feet below street level). The Federal Reserve Bank of New York is the size of a city block, built around the vault and the 90 ton steel cylinder that lets you in. Aside from routine maintenance, this cylinder has been operating there since 1924. This is the only entrance into the storage area and it’s not exactly a door, but a 10 foot long hallway that when sealed, is air-tight and water-tight. The cylinder is encased in a 140 ton steel and concrete frame. 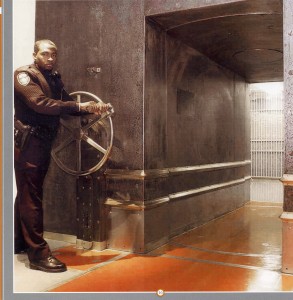 If you get any ideas about stealing things, know that all the federal officers are marksmen, tested twice a year at the Fed’s own shooting range. Plus, the security areas and bank exits can be sealed off in 25 seconds. And you’d have 72 hours of air if trapped inside the vault.

So now we’re standing inside the vault. It looks like a boring storage room from my apartment days. Each of the 122 vaults inside has bars running up and down, and its own lights. It mostly runs around the room’s perimeter (with some deviations). The only vault with its lights on is next to our standing area, and we can see gold bars stacked up. We can even put our pinkie finger in to touch them. It’s allowed, though I didn’t realize it at the time (I was thinking about those marksmen and closed circuit cameras).

Each vault uses a triple lock system, where three individuals from different departments must be present when a storage area is opened.

We could see two different types of gold bars – each weighing about 27 pounds.  The bars that are more rectangular are from after 1986 or are foreign. The ones that you typically think of as a gold bar (higher in height) are usually U.S. bars from before 1986. The rectangular ones are easier to stack and carry, apparently.

We could also see the scale in the middle of the room. It looked like a very crude scale, though it can weigh with accuracy 1/3 of a dollar bill in weight, up to more than 600 pounds. We didn’t actually see these peole weighing anything – the scale sat empty, as did the room. 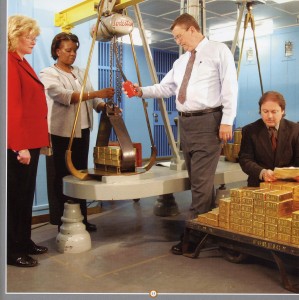 We were also shown magnesium shoe covers, at a cost of $500 a pair – in case the worker drops a 27 pound bar. We saw some indentations in the cement where bricks dropped, from a low height.

Surprisingly, most of the gold in this vault belongs to 60 depositors, mostly foreign countries and foreign organizations (no individuals). Our own country’s gold is mostly at Fort Knox. The gold here isn’t labeled with its owners names, but rather the gold is stamped with numbers. Those working at the vault don’t know what gold belongs to what bank, country or organization by looking at it.

My friend and I expressed disappointment to the guide that we couldn’t see more gold. We thought we’d see giant rooms filled with gold. The guide got defensive, saying something to the effect of “you just saw millions of dollars of gold in one vault – you should be grateful we let you see that.” And we were grateful, we just thought we’d see more.

This is what we thought we’d see: 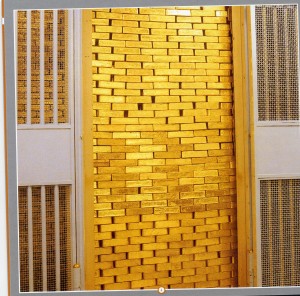 This is what we saw:

The entire tour (including the coins, film and vault) lasted less than 45 minutes, and at the end we got to take home small bags of shredded bills. My kids were thrilled.

Details: The Federal Reserve Gold Vault Tour is free, but it’s best to make reservations in advance. The website claims that kids under age 16 can’t take the tour, but a friend called and was told kids can go on the tour. You may want to call the Fed to find out about age limits. (212) 720-6130.

You need to bring your reservation print-out with you, and store everything (including notebooks, pens, cameras and water bottles) in a locker there. It’s tough for a journalist to be without a notebook and pen – I almost broke into a cold sweat.