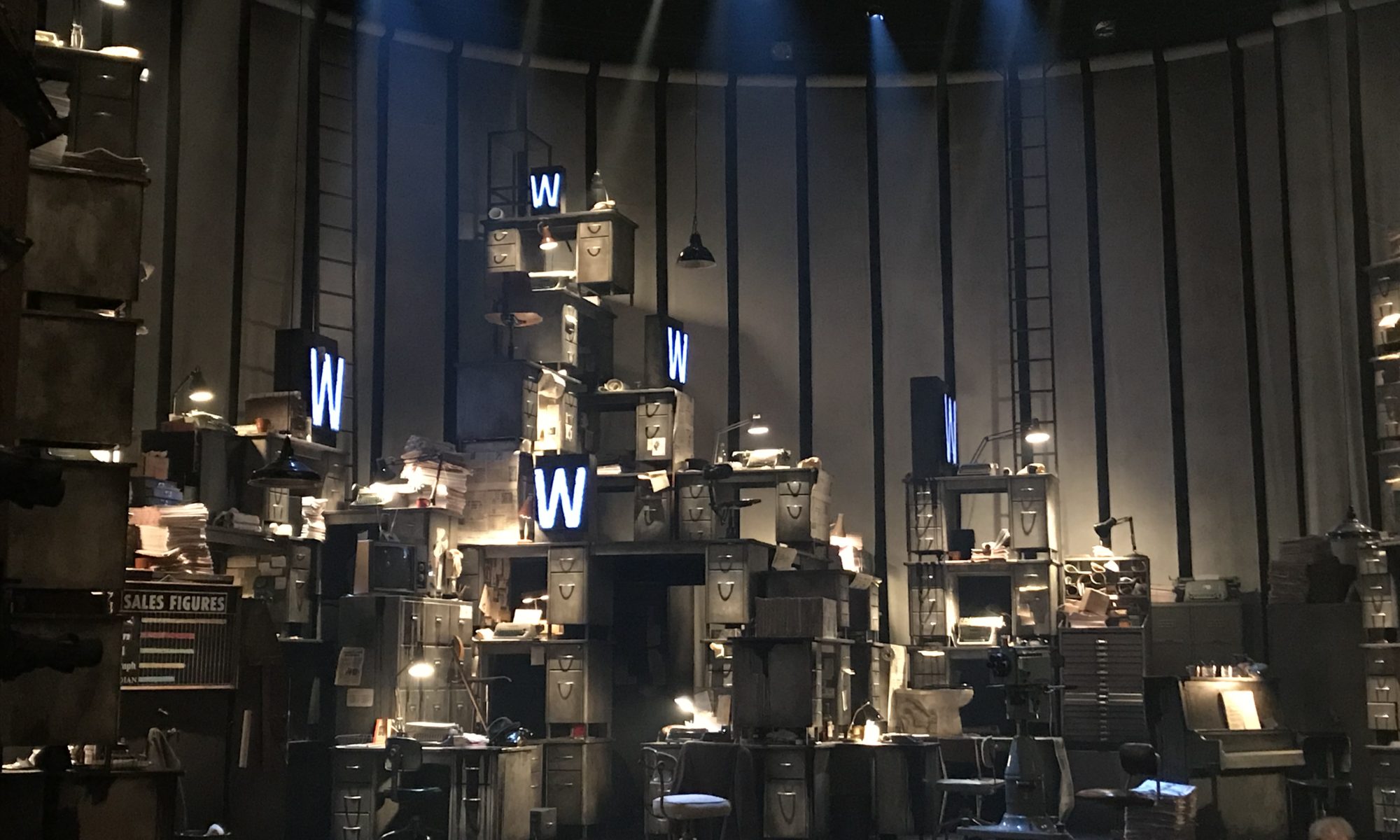 It seemed appropriate that when going into New York City for a journalism conference that the Broadway show my fellow journalists and I chose to see was Ink on Broadway. This show, brought over from London’s East End, tells the story of how Rupert Murdoch built the Sun from a failing paper, to a well-read staple. Is Ink appropriate for kids? I’ll fill you in later.

The plot of Ink on Broadway

The show follows a one year arc of Rupert Murdoch and editor Larry Lamb’s quest to buy and rebuild the Sun into a paper with high ratings. It’s all about the ratings. Does that sound familiar? There’s a lot about the story which rings true today – not surprising, as it’s a new play. Even though it’s set in 1969, the playwright weaves in relevant themes to today’s news environment:

• Give the people what they want
• When does truth matter in the news?
• What’s the line between appropriate and inappropriate?
• What role should women play in the newsroom, how they’re featured, and in what stories are covered?
• How do you get people to read the news?

The one year time period made for natural bookends for the show, and helped space out the drama, from the potential ridiculous nature of buying the paper in the first place, to the strategies to get readers (including the Page Six girl and various promotions like free underwear). It pitted the old guard against the new guard, and the disruption of traditional news.

In general, I really enjoyed the show, which kept my interest and was well written, well acted, and provocative.

The staging of Ink on Broadway

One might think that a show that takes place completely in the newsroom might have a boring set. That’s what I initially thought. However, the set was wonderful. Designers created a labyrinth of a newsroom, with desks precariously stacked on top of other furniture, with unseen stairways and hallways that looked unstable, but were not. They made good use of lighting on the set as well, and included some large video screens as a background which were used intermittently to good effect.

Quick stage changes were made via a mid-stage platform that would drop up below the stage.

The best scene from a staging point of view was the newspaper production and typesetting process, with metal plates set, pounded, and the pouring of hot molten metal.

There were a few things I didn’t like about Ink on Broadway. I thought the sound was too loud. The actors smoked throughout the production. While that may be typical for the time, the smoke carried out to the audience and it was bothersome to those of us with smoke sensitivities. Also, the thick accents were at times difficult to understand.

Is Ink appropriate for kids?

Is Ink appropriate for kids? No. That is unless your kids are teens and you’re okay with a lot of bad language. Even so, they may not be interested in this show, which had a few splashy stage theatrics, but in general isn’t the most scintillating topic for kids. And the accents were tough. That said, if your kid/s are interested in how the news is made and how it’s evolved, consider taking them.

A few random other things about Ink on Broadway:

The advertisements and Playbill cover show the two main actors playing Rupert Murdoch and Larry Lamb (the wonderful Bertie Carvell who I saw in Matilda on Broadway, and Jonny Lee Miller). Carvell looked so different in Ink than the advertisements that I actually had to confirm he was playing the role that night. I guess they wanted him to look recognizable in ads, but it was kind of odd.

There are plenty of women’s bathroom stalls in the theater – hooray! The line leading from the basement bathrooms may be long and go up the stairs, however. It moves pretty quickly.

The running time of Ink on Broadway is 2 hours 40 minutes, including one intermission.

While many Broadway shows sell posters, clothing and CDs, this one sold the script!