We recently had the chance to tour the new exhibit at the American Museum of Natural History. It’s called Beyond Planet Earth – the Future of Space Exploration, and it’s about…space exploration!

In it you’ll learn about the history of space travel (and see this Russian space capsule, the Vostok,  that had all of four switches and 35 indicators inside. It carried Yuri Gagarin among other Soviet astronauts in the 1960s).

The best way to describe the exhibit is to go through some interesting facts we learned:

–Does the moon have a smell? Yes, but astronauts can’t smell it because there’s no air on the moon. They could smell the lunar rocks on board the space craft – they smell like gunpowder (but the smell didn’t last until they landed back on Earth).

–Since October, 2000 there has always been a person living in space.

–The International Space Station has housed over 200 astronauts from 15 countries so far (6 astronauts at a time). They average six months each, and the station is expected to be used through 2020.

–The Hubble telescope has been refurbished 5 times while in space (we saw a recreation of the 2009 upgrade). For this last upgrade, the shuttle and astronaut moved within several feet of the telescope, while Hubble Operations Center workers on Earth then commanded the telescope to move toward the astronaut.

–Until 2005, Russia and the U.S. were the only countries with programs to send humans into space. China’s space program launched in 2005.

–Richard Branson’s company Virgin Galactic plans to take paying passengers into space in “spaceplanes” – taking them 62 miles above Earth for a brief trip. Cost: $200,000 a person. Once the plane is 62 miles up, and pilot will cut the engine for six minutes so riders can experience weightlessness.

–Moon dust is dangerous and sharp! And it causes lunar static cling.

–The next moon target is the Shackleton Crater at the south pole.  It has water-ice (from comet impacts) and full exposure of sunlight 240 days a year.

–The Japanese landed on an asteroid in 2005, which is really hard to do.

–Ever tried walking on an asteroid? Due to low gravity, astronauts can’t walk on the surface. Instead, they might tether themselves to a net bolted into the asteroid.

–Food not allowed on space missions: anything that has crumbs (bread, chips, cookies), carbonated drinks (the bubbles will expand in your stomach), smelly foods and powdered spices. Instead, good food sources include recycled urine (really!) and foods that crunch without crumbles.

–Should you exercise in space? YES! Without exercising, your body gets weak (no gravity to fight, and a floating body makes a person’s muscles go to pot).

–Space garbage is treated to remove all water, heated to kill germs, compressed to take up less space and sealed in plastic. Not so green, huh?

–Average temperature on Mars is -81 F.

–Mars has no ozone protection from the sun’s radiation.

–Living in almost no gravity can cause nausea, disorientation and extreme discomfort. Sign me up!

–My son was able to name the Mars Curiosity Rover without any signage. Thank you TFK (Time for Kids).

–The new spacesuits are tight and formfitting, but still give the proper pressurization. The pressurization mimics the atmospheric pressure. Without it, you die.

–Some scientists are devising ways to convert Mars into a warm, wet, fertile environment suitable for human life. It could take thousands of years, and is called terraforming.

The exhibition has a few hands-on computer “games” that help you deflect an asteroid, or help add heat to Mars. You can take your photo with a new pressurized suit. My  8 year old son loved it, my 10 year old daughter thought it was boring. We spent about 50 minutes in the exhibit. I thought it was interesting. If you have an iPhone, iPad or iTouch, you can download information about the exhibit while you’re there with a QR scanner (those of us with Droids are out of luck).

There is an additional charge to enter (though it’s free for members). For nonmembers, it’s $25 for adults (includes museum admission and adds $6 to the normal price) and $14.50 for kids (adds $4 to the normal kid price). For corporate members, you’ll pay $12.50 for adults, $8 for kids. 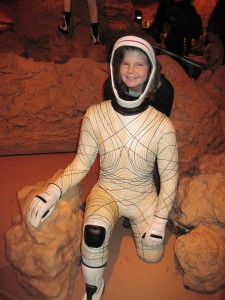