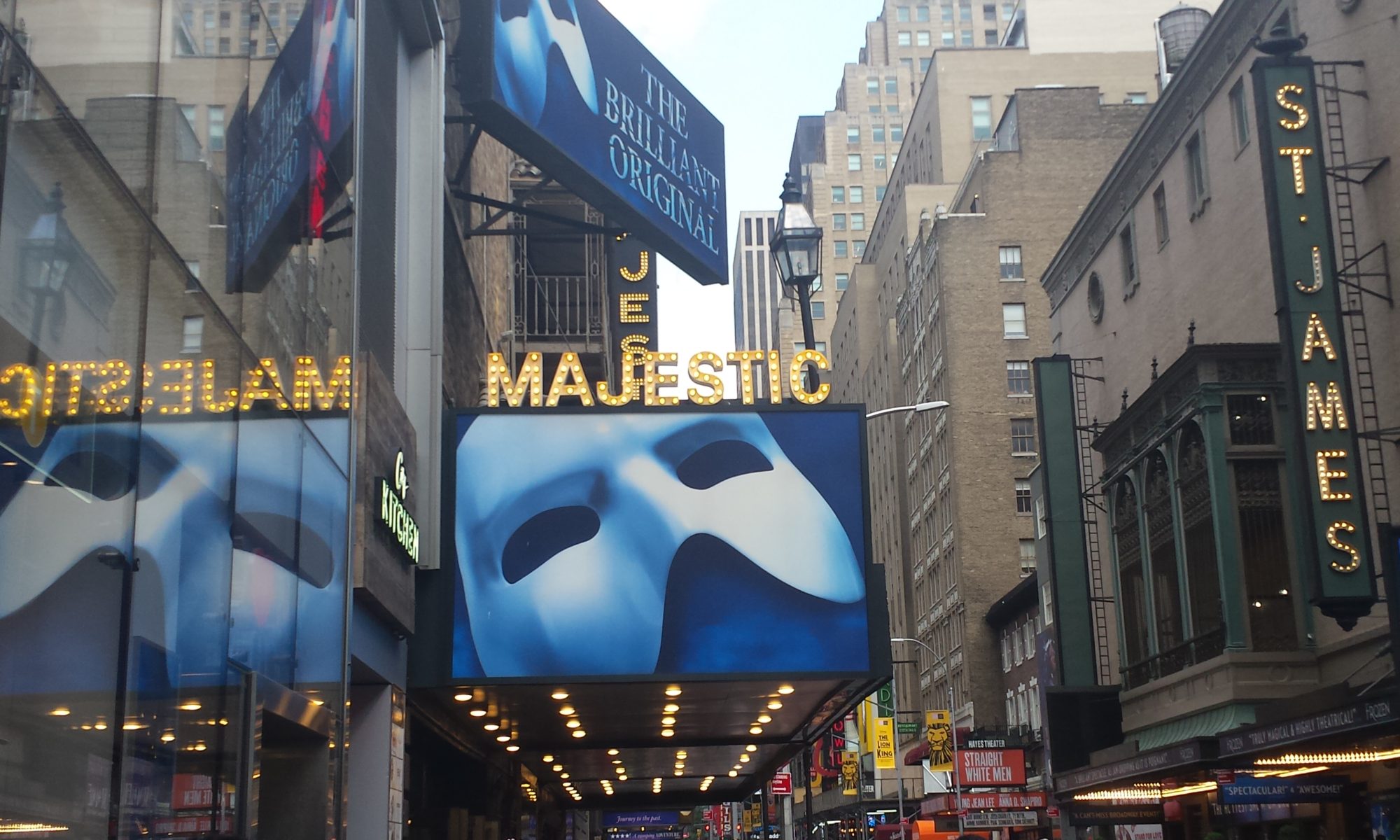 Is Phantom of the Opera appropriate for kids?

It’s a little crazy that this was the first time seeing Phantom of the Opera after living in New Jersey for nine years, and seeing multiple Broadway shows per year. I figured that since it has been on Broadway for 30 years, it would be here for a while longer (we’d get around to seeing it), and other shows are coming and going. Plus, after 30 years, wouldn’t it be dated? But my kids have been asking me to go for a few years, and the stars finally aligned between our schedule and ticket prices (thank you TDF membership).

What a spectacular show. The tourists behind us said this was their first Broadway show. And I was happy for them, because they were wowed and this would be an incredible first Broadway experience.

The leads were fabulous. Those playing Christine and the Phantom were in their first year in these Broadway roles, and it was Carlotta’s Broadway debut (granted, she’s had an illustrious career in opera, so it’s not like she’s new to the stage). Having listened to the music many many times over the years, the cast did more than justice to the roles. And reading through the Playbill, it’s amazing how many of the actors were in traveling versions of Phantom elsewhere.

I’ve grown up with the music, but there was no equivalent to hearing it performed live by an orchestra and hearing the vocal performances live too. I felt like a parent failure that my son hadn’t heard any of the music before this. I had no idea.

Phantom of the Opera staging

Assuming the staging is the same, after 30 years, the show MORE THAN holds up. The theatrics are incredible. I don’t want to spoil it for anyone, so I’ll just say the Phantom appears in places you don’t expect him, which amazes and delights. You probably know the chandelier moves – it’s a major plot point. It’s still incredible to see that happen (granted, it doesn’t actually come crashing down as I imagined it might, it was more like a slow descent – which makes sense for safety, but I did think it would go faster).

Several scenes wowed for their staging as well, like the river and boat scene with candles appearing from the floor and mist floating across the stage as the boat moved effortlessly. And the masquerade scene with ornate costumes, and a massive staircase. If only I hadn’t forgotten my glasses at home! Sitting in the mezzanine, some of the details were lost on me. The seats were fine, but my glasses would have enhanced the experience.

Given all that I’ve seen in the news in recent years, with kids and women kidnapped by controlling men, it was really uncomfortable to watch this happen on stage. Though I knew the music, I still didn’t know the details of the Phantom story, so I kept wanting the Phantom to show his good side, to reform. He’s vulnerable and wants love and physical attention. And doesn’t everyone deserve that? Yes, but not if he has to kill and control and kidnap to get it. So that aspect, in this #MeToo era, was hard to sit through.

Also there was a lot of choreography where Christine kept falling into Raoul’s arms. I know she had to do something during this time, but that seemed dated. And in spite of Christine and Raoul having a relationship earlier in their youth, they fell in love in what seemed like two days and then got engaged declaring their undying love. Yes, it moved the plot along, but how believable was that?

Is Phantom of the Opera appropriate for kids?

Is Phantom of the Opera appropriate for kids? It depends on your kid. There are no bad words, and a little kissing, but nothing embarrassing which would cause you to shield young eyes or ears. The issue for kids is the darkness and maturity of the material – and I think the staging and music might be a little scary for young kids at times.

Twice in the show you’ll see someone in a noose – once the person is hanging and dead, the second the person is alive and standing on the ground. Others are killed during the show (though not violently in front of you). Christine is kidnapped more than once by the phantom and threatened with marrying him or watching her boyfriend die by noose in front of her/you (sorry for the spoiler). She’s subjected to a man who wants to control her and is willing to kill to do so. That’s dark stuff. Granted, kids know dark fairy tales like Hansel and Gretel, and Little Red Riding Hood, so maybe I should give them more credit.

These scenes, and others involving the Phantom, involve changes in music and lighting, which are also foreboding and kind of scary. If kids are sensitive to that, maybe don’t take them. There are some pyrotechnics which are great to watch but might be jarring to kids.

My teens, who are veterans of attending Broadway show, walked out gushing about the show. During the opening number, my son’s jaw dropped. The drama, the music and the staging blew them away. They loved it.

The show is 2.5 hours long with one intermission. Bathrooms are in the basement and mezzanine. The mezzanine women’s bathroom has three stalls.

For discounted Phantom of the Opera tickets, see our Broadway for Kids page (the bottom).

One Reply to “Review: Is Phantom of the Opera Appropriate for Kids?”