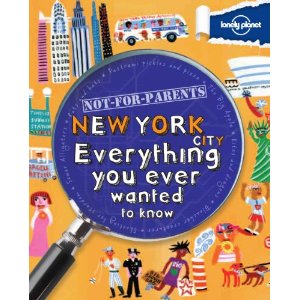 If there’s one way to get a kid to read a book, label it “Not for Parents.” That will attract their interest. As a travel writer, I collect guidebooks from the places we go, and try to get kid-friendly ones so my kids will take an interest. Usually they don’t. They were interested, however, in this Not For Parents: New York City – Everything You Ever Wanted to Know. But of course I had to sneak away and read it too.

Though it’s published by Lonely Planet, it’s not actually a guidebook, but a great way to get to know a city we visit often. As expected, it’s quite colorful with cute illustrations from a number of artists. Inside it tells the story of everything from street food, to the building of the Brooklyn Bridge, to wild animals in the city (yes, rats are included).

I asked my kids what they liked, and they said they liked the illustrations and most of the chapters (each “chapter” is 2 pages and covers one topic). The topics my daughter didn’t like had nothing to do with the actual content – she just doesn’t like those subjects at all (i.e. sports). The kids also thought the book was funny.

-the apple muffin is the state’s official muffin

-anyone who owns a building in Times Square is required by law to attach an illuminated sign to the outside.

-Central Park used to be a swamp

-Brooklyn Bridge workers sometimes sleep in hammocks on the cables. Some fell to their death in the East River.

-The Museum of Modern Art was started by three women, and it was considered “outrageous” when it opened.

-over half the people in NYC don’t own a car

They also have these Not for Parents books for Paris, London and Rome.