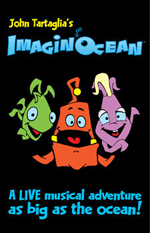 When my 9 year old daughter and I planned a girls’ day in New York City, we wanted to see a show. We’ve already seen Mary Poppins (we loved it), and do want to see Lion King and Wicked (still too expensive). I looked off-Broadway and found ImaginOcean, which just celebrated its 100th show.

ImaginOcean is created by John Tartaglia, best known as the creator (and Tony nominee) of Rod and Princeton in Avenue Q. I love, love, love that show (and the music), but it is NOT appropriate for kids. Like Avenue Q, ImaginOcean also uses puppets and is a musical (though you can’t actually see the puppeteers during the show). ImaginOcean started as a cruise ship show, and was expanded to the current off-Broadway production.

The show revolves around three fish friends, Tank, Dorsal and Bubbles (with an octopus, seahorse, and jellyfish thrown in as well). With the help of a treasure map, they’re trying to work together to find a treasure (spoiler: they’re rubber bracelets that you can buy in the gift shop after the show) and realize the value of friendship. Dorsal is a neurotic, fearful and annoying fish who is probably channeling children’s fear of failure and the unknown. The plot was a bit boring for adults, but the kids loved the whole thing.

What kept me interested was the puppets. It was really hard to see how they were doing the puppet work. The puppets are neon and the stage is black – and the light is ultraviolet (it’s a very helpful light when a reviewer is taking notes, because it lights the notebook right up!). The puppets moved so fast and with such a range that it was hard to believe they were controlled by people on stage. Only once in awhile could I tell that Dorsal had a stick controlling his fins, and finally I could see out that someone had black fabric on their arm and they were moving a puppet. The puppetry was amazing.

The show starts (and ends) with two stationary fish (Whipper and Snapper) in the top corners of the stage, talking to the audience and to each other. Best way to describe them are Statler and Waldorf of Muppets fame (the two old guys in the balcony). Only one of them is actually nice. They were funny and got the kids involved. 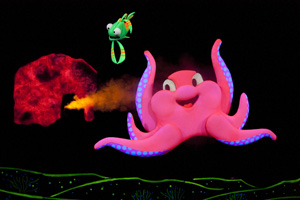 The other fun element is the bubbles at the beginning. While tons of bubbles float down on the audience, the ultraviolet light makes them iridescent and the kids went nuts.

The music, singing and story is prerecorded. John Tartaglia does the voices of five of the fish, but doesn’t actually perform live. The puppeteers have some amazing backgrounds – working for Sesame Street, the Muppets and more. Did you know you can earn a Bachelor’s degree (and even master’s degree) in puppetry from the University of Conneticut?

The theater is intimate and the show lasts 50 minutes, with no intermission.

ImaginOcean plays at New World Stages, along with several other off-Broadway shows (Avenue Q is now there too). There you’ll also find the family-friendly  Gazillion Bubbles Show there. We’ve heard good things about it, but we saw the show in New Jersey at the State Theater, it was so disappointing that the theater actually gave us credit toward another show – and we didn’t even have to ask. Apparently the show is better at New World Stages because the theater is small and it’s more interactive.

At the New World Stages, you’ll also find Naked Boys Singing – uh, probably not so family-friendly, but Dori didn’t seem to notice the signs. Plus we 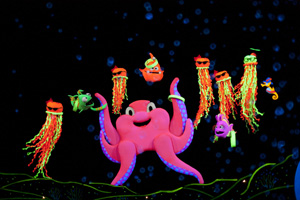 did a matinee, and there weren’t any bachelorettes or other parties whooping it up.

Tickets: Tickets are $39 (and $65 for premium seats – not sure what that would be since the theater is so small – just before the show they let us move to any open seat in the theater, though the seats were all good). You can get discounted tickets at Broadway Box for $29.50-$35 (use code SAVE18 for the $29.50 tickets). As of this posting, TKTS was offering 50% off tickets. The official ImaginOcean website lists their “Wednesday web special” as $29.50 a seat.