What Happens When a Disney Ride Breaks Down 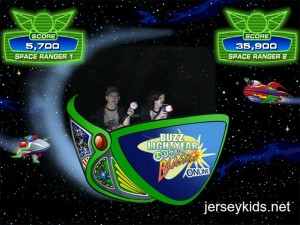 I totally beat my sister.

On the Pirates ride, we were surprised to play bumper boats as we approached the waterfall with Blackbeard talking. He talked, and talked and talked until we could repeat his conversation by heart. Fortunately after about 10 minutes, we moved on. 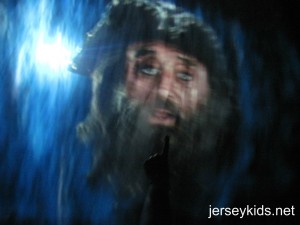 We wondered if we could sue (and recover) like the man awarded $8,000 for getting stuck (and not quickly evacuated) on It’s a Small World.

It’s pretty funny to hear the announcements made in the ride when you’re stuck, because they stay in character to the ride (mostly).

For the Grizzly River Run ride we used FastPasses to board, and made it most of the way through the ride before lining up (bumper boats again) to go down the final plunge. The boat ahead of us was empty (the seat belt wasn’t working) and it got stuck and wouldn’t move toward the doors that allow you down the plunge. The cast member at the little gate house above asked us to wiggle a bit to see if that would free the boat in front. It wouldn’t. 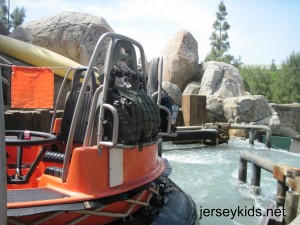 The boat in front is stuck. Notice how high the water is.

I offered to remove my seat belt so I could kick the raft – I’m sure that would have done the trick. She said no. “Remain in your boat with the seat belt attached,” is what I think she said in the microphone, but it came out like the Charlie Brown movies, “bwha bwha bwha bwha…” I wondered what they’d do to me if I did remove my seat belt and kick it (my lawyer brother-in-law reminded me that if I fell out of the boat or slipped, they’d be liable for a major lawsuit).

When we got on the ride there was a 90 minute wait. I’m sure it was more now that we were stuck. We wiggled the boat again – no progress. The maintenance guy was called. He looked at the boat and shook his head and left. I think he went to lunch. We thought they’d get a big pole out to push it along. Nope. We sat. And sat.

Finally they announced that the ride would be evacuated. They started draining the river. Turns out the Grizzly River Run shares water with the Pacific Wharf/Paradise Pier lake. When the lake is high, Grizzly River doesn’t run. When it’s low, it does. They said it would take about 30 minutes to drain and refill the ride, so we’d have to get off when the water got low enough to get us off the raft. We watched the waterfall next to us dry up, and the water sink below the rocks, exposing the mechanics. 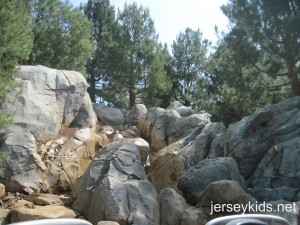 The waterfall drained faster than a California drought. 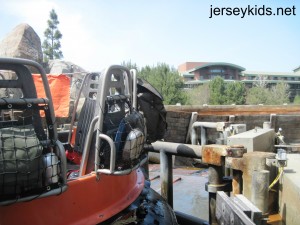 See how much water drained? Look at the previous picture like this.

The cast member, when asked how often this happens, was vague but finally admitted that this is not an uncommon occurrence, though it doesn’t happen daily. The boat could just as easily have gotten stuck with people in it, but they might be able to free the boat by wiggling. 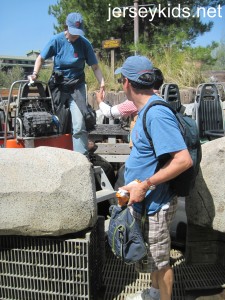 Our boat makes the leap.

So another cast member brought out a “ladder” which was really like a metal grate step stool, to help us out of the rafts (starting with the rafts at the back) when the water was low enough. We walked to a railing, and then down through a staircase behind the fake rocks. 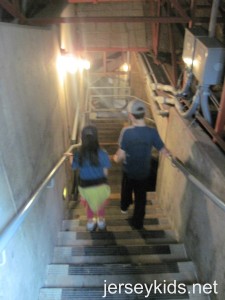 The hidden staircase out. 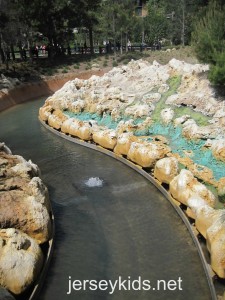 Look how low the water is!

The cast member gave us a “readmission pass” good for almost any ride in the park, except those in Cars Land or the World of Color show. And because we were so nice in our boat, she gave us an extra. 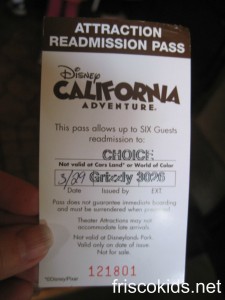 We got the Golden Ticket!

We planned to use it for Grizzly River Run later in the day, but the weather cooled down and we decided we no longer wanted to get wet.  Instead we used one of them for Toy Story, which doesn’t have a FastPass system (it does in Disney World,) but we were allowed to use it there anyway. For the record, we found a cast member at the exit who let us in that way. We didn’t have any line – just walked straight up to the ride. Kaching!

If you’re stuck in line when it closes down, you do not get anything if you leave. At Indiana Jones (which is similar but much better than the Dinosaur ride at Animal Kingdom) we used a FastPass and were in there for 30 minutes while the ride was broken. We asked a cast member about getting our FastPass back, and she said we’d only get it back if the ride was evacuated. Those in the standby line would be out of luck, but the FastPass riders would have a free pass to come back. We stuck it out and fortunately it reopened soon after.

Coming soon on this Disney series:

How to maximize your FastPasses