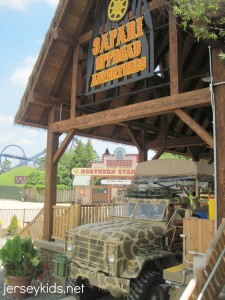 We went to Great Adventure’s safari a few years ago, when it was a stand-alone entrance or upgrade. Last year they closed it down to redo it, including it in the Great Adventure offerings as an attraction you don’t pay extra for. We heard about the three hour lines (and there’s even mention of that in the park. But we were smart – or so we thought – arriving at the park at opening bell (10:30 a.m.), hitting Kingda Ka first (10 minute wait!) and then the log ride right next to the safari entrance (10 minute wait) – figuring it was still really early and we’d have a relatively short wait. 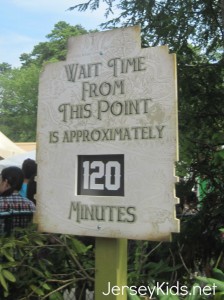 Apparently the rest of the park goers skipped Kingda Ka and the log ride to go STRAIGHT to the safari. Lesson learned.

Fortunately our wait was only 85 minutes, but that was plenty long at 11:30 a.m. in the heat.  You can see the tents below, which provided shade in most spots. Fans would have been nice too, but we definitely appreciated the shade! 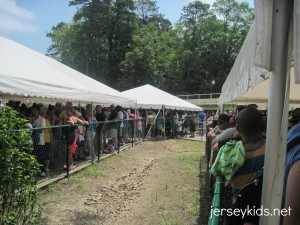 By the time we got up to the front, exhausting our stash of warm water, a vision appeared – the cart vendor with icy drinks. The popcorn (with its saltiness) didn’t go over too well, but the drinks sold quickly and gratefully. They’d be wise to always station someone there if they don’t already. 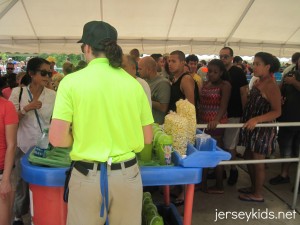 Before you get on the vehicle, you stop to get your picture taken by an official photographer in front of a safari vehicle backdrop. Don’t try to take a picture with your own camera, though. They’ll yell at you and shoo you away. Our guide Johnny was very good, and we made our way into the park. When I asked him a question that he didn’t know the answer to (how often ostriches lay eggs each year), he said to ask someone at the end and we’d get our answer.

They have a video screen in the front of the vehicle which is supposed to help tell the story of some family who owns this game reserve (that’s their story). If I didn’t read about that ahead of time, I wouldn’t realize that’s what was going on. There were a few short videos throughout the safari that talked about the animals – they didn’t add much to the experience, and they always started or ended with a radio station advertising, which was incredibly annoying. 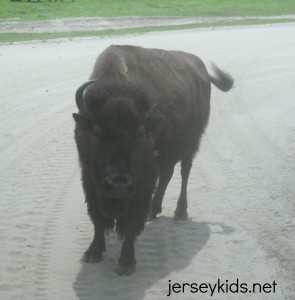 I just loved this bison that we encountered in our first section. He was indeed standing in the middle of the road (we went around him). Most of the animals roam free in their areas, and the vehicle drives around on bumpy unpaved roads, adding to the safari experience (the lions were separated from us by a large ditch, and the tigers were caged. Some of the bears had some barriers as well – no worries). 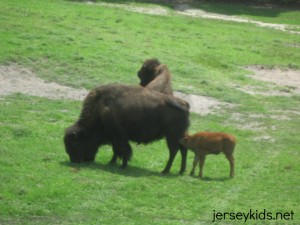 The bison were shedding their winter coats (it’s about time!) and we saw several adorable bison babies, including the one above that was nursing. These were once the most populous animals on earth – now there are only around 19,000 of them, which lead the guide to talking about how delicious bison burgers were, and they’re only 2% fat.

As we drove, we saw rheas, which are birds that look a bit like the emu and ostrich, and they’re from South america. We saw Roosevelt elk (yes, named after Teddy). We learned that what differentiates horns from antlers, is that horns don’t grow back if removed. 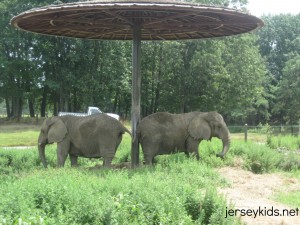 Elephants live in a matriarchal society. These happen to be all female at the park here. Did you know a group of rhinos is called a “crash?” We saw some dama gazelles – the guide said there are only around 200 in the world and one was born there that week. 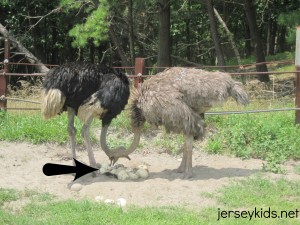 We saw many, many ostriches in the park, and were lucky enough to see this egg nest. One ostrich egg is large enough to hold a dozen chicken eggs inside. I couldn’t figure out what they were doing here with their beaks, but it looks like they were pecking them. Probably cleaning the area out – but that’s just my guess. The male is on the left (black) and females are grey. They are the largest bird on earth, standing upwards of eight feet tall. The eggs will hatch in 35-40 days. And ostriches are the second fastest running animal on earth, behind the cheetah. 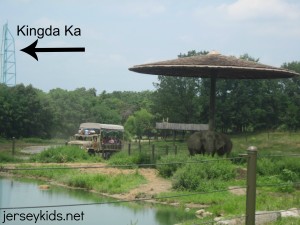 We saw some African elands, which have interesting white stripes down their sides, and also some oryx, a type of antelope, and adacs (that’s not the spelling, but I didn’t catch it), that are thought to be the inspiration for the unicorn. When they turn to the side, their twisted horns appear as one, and the bodies are white in appearance. 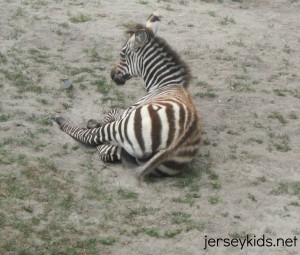 We loved seeing the zebras, including some babies. They had to keep the zebras away from some of the other animals because they’re aggressive toward other species. The guide said the stripes are not actually black or white, but brown – which you can see more easily on the babies and also on their manes. 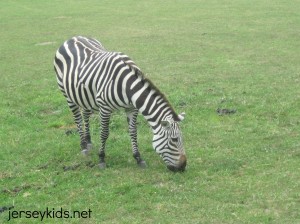 Just like in the safari pictures, the giraffes were waiting for us on either side of the road, giving us some lovely close-up views. The guide said they’re always there – not sure if they get treats and they’re waiting for more. Their necks weigh 600 pounds, and they use them to fight for domination. 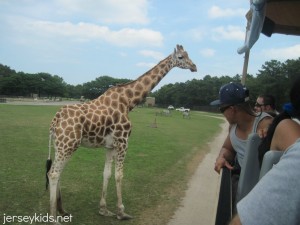 Soon after we arrived at Camp Aventura, which is basically an opportunity for you to spend money. You don’t have to get off your vehicle, but most people did. You will have a different vehicle/guide when you choose to get back on – there’s no schedule and a short wait. As soon as you get off, you’ll see copies of the pictures they took of you before you go on the vehicle just 20 minutes earlier. How convenient! For $20 you get an 8×10 and two smaller ones. And you’ll also get to go through the gift shop, which has some reptiles to look at. 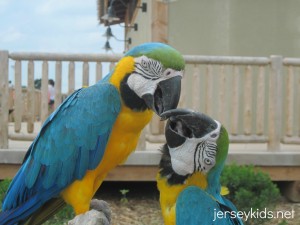 We loved seeing the birds, including these blue and gold macaws that were not chained up, but just sitting on the branches next to a keeper. She said that they wouldn’t leave each other, and don’t fly away (their wings aren’t clipped either). They’re grooming each other, though it looked like they were kissing. The bird below, does have one wing clipped and doesn’t make much noise except if it senses danger (like when the keeper was holding a snake) – then it’s quite loud. That’s its role. Quite interesting! 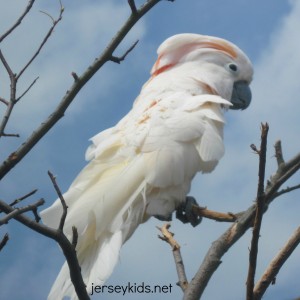 The Soaring Eagle is one zipline, where you sit in the chair. They reel you back and then you take a ride forward very quickly.  They also have a food truck there where you can order hot dogs, french fries, soda and Italian ice. It hit the spot because we were hungry, but wasn’t our ideal lunch spot. A water fountain would have been appreciated, but you can refill your bottles in the bathroom sinks if you don’t want to purchase a bottle. 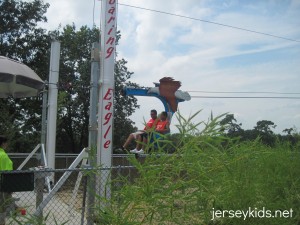 We also saw some large tortoises – I was curious if they were Galapagos type tortoises, but there was no sign. They also had some really furry chickens, something that looked like a smaller cow, and another goat-type animal. I recommend they put some signs up. We got back in line for the next vehicle, there were several waiting. We had a new guide (I didn’t catch her name), and we headed down to the rest of the park. The camp is at the high point.

We saw mountain goats and white tailed gnus (a type of wildebeest), which are almost extinct with only 100 around at one point. Now there are 4,000 and they reproduce here (baby born recently).  I didn’t get good pictures of the lions lounging, but we passed through their area. It’s also matriarchal, in that the females are in charge in their home area.

We saw a lot of black bears, which were adorable, including bear cubs. They’re found in 49 or 50 states (guess which one they’re not in. Hawaii!). They weigh 200-500 pounds and the moms give birth when SLEEPING. This is during hibernation, and the baby nurses for 1-2 months while mom continues to sleep. 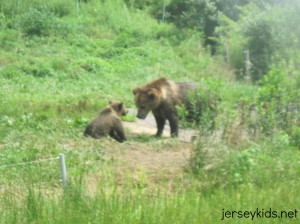 Around this time we passed the scarlet ibis which looks like a flamingo but isn’t. Flamingos don’t turn pink until adulthood, and only after eating shellfish with keratin. If you’re wondering where the animals go in winter (we were), they have shelters with heat the animals can stay in. Many times, though, they go outdoors to play.

While my black bear pictures were fuzzy, I got a couple decent ones of the brown bears. The mom usually gives birth to twins. The adults don’t climb, but they will help their babies climb from danger if needed, giving them a boost. They eat everything. They’re well trained and will sometimes waive at the tourists, thinking they’re going to get a treat. We loved the cute bears playing in the water (they’ll blow bubbles for fun in there). When nursing they make a lot of noise, which is thought to stimulate the milk. 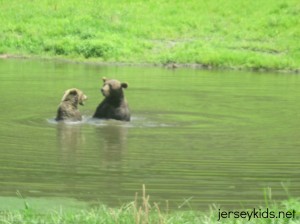 We headed into the NJ reserve, which they leave for the native animals like the red tailed deer, bald eagles (they have nests), boxer turtles, and others. We saw kangaroos in the outback section. They can jump 20 feet forward and 10 feet high in one jump, and their legs move together in a single unit. Their arms propel them. Baby joeys are the size of lima beans when born, after 6 months gestation. They spend two months in the pouch.

We saw some black swans, which live mostly in the water. And when looking at the emu, the guide told us that the emu walk was copied for the velociraptor in the Jurassic Park movie. Toward the end, we saw three of the four species of tigers, including the Bengal tiger (there are 200 total in the world), the Golden Toffee tiger (the park has two) and Siberian tigers. They can eat 75 pounds in one meal. It was sad to see them caged up.

Then we made our way back to the starting point. Without the stop at Camp Aventura, the ride is about an hour. We spent an additional 40 minutes at the camp, looking at the birds and animals, and eating our cheese fries. I thought they did a good job overall with the tour. We got a lot of information, some up close views, and it’s great to have it included as one of the attractions. I didn’t like the line or the constant selling. My advice is to get to the park early and go there first!

Disclosure: Great Adventure provided us with tickets in order to review the safari attraction. All opinions are my own.