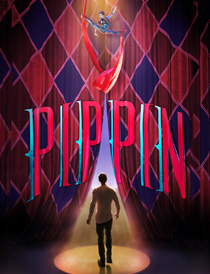 With 10 Tony nominations and a positive New York Times review, I was glad I had tickets to see the Pippin revival the day after its official opening. I’ve not seen Pippin before so I can’t compare how this revival is different, though the circus theme is new, and the lead player is a woman instead of a man. And her arms are so buff that Michelle Obama’s look downright flabby in comparison. 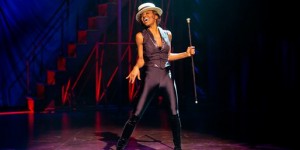 Let’s start with the million dollar question for my family-friendly theater-goers:

Is Pippin appropriate for kids?

Hell no. It wasn’t because of the language (though there were some very clear profanities yelled). There were a couple of scenes with highly sexualized content, which I would not want my 10 and 12 year olds to see. One scene involved three females dressed in body suits, dancing provocatively alone and sometimes with the young adult male Pippin, simulating sex. The body suits did not reveal the dancer’s actual bodies but they were very suggestive in the detailing. For adults, this was fine. Not for kids.

The basic plot: Charlemagne’s son Pippin (who the hell names their son Pippin?) graduates from school and tries to figure out what big thing he can do to make his life meaningful. The play (within a play) follows his ventures/misadventures and personal growth as he seeks out his future as an extraordinary individual. 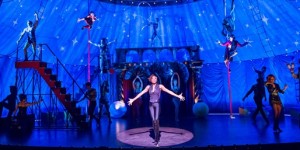 And Andrea Martin as Pippin’s grandma – a show stopping performance. I’ve never seen a standing ovation mid-show before, but she got one at the end of her scene-stealing act. (Spoiler alert: she breaks out of her cover-up dress into a revealing bodice, and ends up doing trapeze acts with one of the circus guys – and then leads everyone in song, partly while hanging upside down.)

The lead player, Patina Miller, shone with her precise movements, singing, dancing and buff body. She was a little scary, but in a good way.

In spite of the show’s intensity, the actors genuinely seemed to be having fun up there – so much so that I think they broke character a few times (especially in the duck song scene).

What I didn’t like: The finale. This isn’t a criticism of the production, but rather the script.

Spoiler alert! Don’t read the rest of this review if you don’t want to know what happens in the end.

“The finale” is a macabre move to end Pippin’s life in a blaze of glory – with him diving into a fire and burning to death, for everyone to remember forever. This is supposed to be Pippin’s way of proving he’s extraordinary? That didn’t jive for me. Pippin wanted to do something to make a difference. He tried ruling his kingdom peacefully, he tried fighting as a soldier. He tried lots of varied sex. He tried pig farming. None of these gave him what he wanted. Granted, Pippin’s idea of being extraordinary was not jumping into a fire to be remembered forever. So it seemed a little odd that the narrator and fellow circus members would say that you’re extraordinary by killing yourself for the world to watch.

Of course in this day and age, that kind of finale has extra meaning, in the wake of 9-11 and suicide bombings.

In the end, Pippin decides his meaning is living a country life with a common woman he fell in love with, and her son, who he helps raise. The idea is that this is not an extraordinary life worth living, though those commoners out there like me beg to differ.

In case you don’t know the play, I’ll leave the last bit for you to discover. I was happy, if uncomfortable, with the resolution, but it sort of worked in the end. The show definitely had a sinister dark edge to it. Maybe kids wouldn’t pick up on that entirely. But I bet they would.

One Reply to “Review: Pippin – appropriate for kids?”