Okay, let’s start with the question most families with young kids have. Is Mamma Mia appropriate for kids? Well…..it depends. 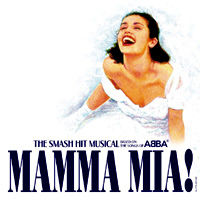 Let’s start with the plot, in case you’re in the dark ages and haven’t heard of it. A young woman (Sophie) is getting married and wants to figure out which of the three men her mom slept with (in a short time span), is her father. Therein lies the problem for kids.

WERE THERE KIDS THERE? WHAT DO THEY FIGURE OUT?

I took my 10 year old daughter, and saw a fair number of kids of various ages (we were at a matinee). The very first scene made me squirm, because after Sophie mails off the letters to her three possible dads, her friends show up for her wedding. (There’s supposed to be a three month gap between the mailing and the friends coming, but that WAS NOT apparent. I wondered how these guys would make it in time for a wedding, when they lived in the U.S. and she lived in Greece and it was snail mail. But that’s beside the point).

Sophie reads aloud her mother’s diary from 1971 where her mom extolls the virtue of each man and describes their encounter, ending with “dot dot dot.” Fortunately I knew what that was, but my daughter did not. So there’s some innuendo but nothing explicit.

The show did have a few other moments where there was some other sexual innuendo (and some revealing body gestures), but the most disturbing part was just the concept that one of these men was Sophie’s dad, and she didn’t know which one. My daughter and I had a few talks after the show, answering questions like, “How does someone have three dads?” Uh, they don’t. How to explain to her that the mom slept with three men and didn’t know which one was the father? If you’re of a traditional family mindset (married with kids, no sex before marriage, no living together), this may not be the show for you (or your kids). The mom doesn’t marry the dad, and at the end (spoiler alert!) Sophie and her man don’t get married, but just decide to travel together.

If your child is old enough to think about these things, be prepared for “the talk.”

Overall the show has a lot of energy, fabulous costumes, humor and great music. There are some very campy parts (the snorkelers dressed in purple, the mom and her posse) and it was high energy. 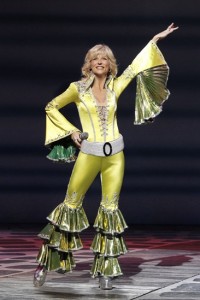 The highlight was listening to Sophie’s mom Donna (Lisa Brescia) sing, along with her girlfriends Tanya (Judy McLane) and Rosie (Jennifer Perry). These women had strong, rich voices and could belt out the numbers. Plus they were hilarious, especially Tanya and Rosie, who got the lucky roles of hamming it up with physical humor during several of their songs. Highlights were Chiquitita and Dancing Queen, where they used everyday items as props, and kept us laughing the whole time. And then Rosie’s number, Take a Chance on Me, where more than one of us had tears of laughter rolling down our faces. 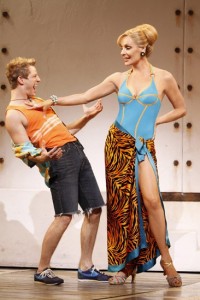 Sophie’s fiancé Sky (Jordan Dean) could have won a Tony for best chest, if he kept his shirt off the whole show. Wow. I’ll leave it at that.

This is not the Sky we saw, but it gives a preview: 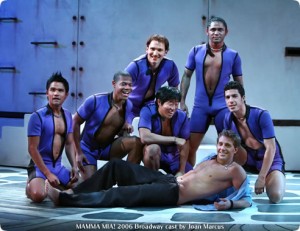 WHAT I DIDN’T LOVE

I didn’t love the first scene. Not because of the “dot dot dot,” but because it was boring and silly and too much of young women prancing and acting like they were five years old. I was seriously concerned for the rest of the show after this scene. Fortunately it improved.

I didn’t love Sophie’s (Liana Hunt) voice. It was good, not great. She was perfect in the role of a young woman who was excited for new adventures. Her youthful exuberance was evident, and she’s a good dancer. But her voice didn’t match up to the other women in the show, and her solos were mediocre. Didn’t Lea Michelle just get booted from Glee?

I didn’t love the placement of the songs that Sophie sang with two of her three possible dads. They seemed more like love songs and not ones that should be sung with your potential father. It seemed weird (The Name of the Game and Knowing Me, Knowing You). I’m sure there are good explanations as to why they’re there – don’t bother telling me, because it didn’t work for me at the time.

I didn’t love our usher, who got mad at me for moving two seats over after the lights went down, and made me move back. It’s not like we were moving from the balcony to the orchestra section. We were moving from the 4th row to the top, to the same row, two seats over. Because the woman in front of me was so tall she blocked half my view. It’s not like the balcony was full. Two seats!!! We moved back to those two seats after the usher left. So there.

We loved the show, and appreciated the two songs thrown in after the bow. I’d take my daughter again in retrospect, though maybe I’d have a little talk with her BEFORE the show so she knew what to expect.

Tickets: You can get discount Mamma Mia tickets at BroadwayBox.com, or even at the box office. The show has been on Broadway since 2001.

5 Replies to “Review: Mamma Mia on Broadway – Appropriate for Kids?”